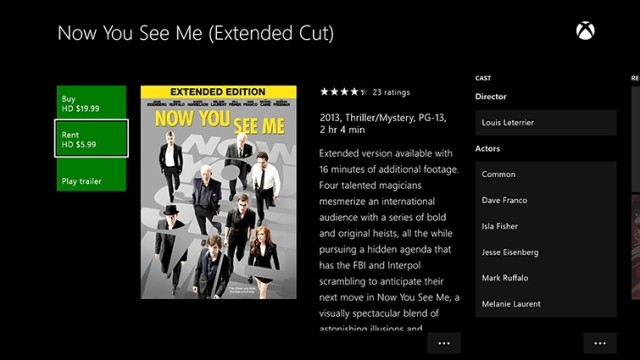 Xbox Video, Microsoft’s movie- and TV-purchasing service, typically allows users to stream and download videos on their devices. No download option is available to users of Microsoft’s new Xbox One console, however.

Unlike the Xbox 360 and Windows version of the service, Xbox Video features no ability to download movies and shows, even for non-rented content. Instead, users appear to only be permitted to stream movies and shows on the Xbox One. As such, users with slower connections may not be able to stream their purchases or rentals. The official support page for Xbox Video on Xbox One notes a user will be “notified before you confirm payment” if his or her network “isn't fast enough to stream the video.”

The missing feature could be a product of Microsoft’s previous plans to make Xbox One an always-connected console, in order to save hard drive space. Microsoft currently doesn’t allow users to fully manage the console’s storage.

In addition to the lack of download option, purchases on Xbox Video also lack a disclaimer found in the Xbox 360 version as to how long licenses would last. Certain production and distribution studios, such as 20th Century Fox, limit how long a user’s license to purchase content will last on the Xbox 360.

Prior to purchasing “The Wolverine” on the Xbox 360, for instance, the following message will appear for U.S. users:

Can’t be streamed or downloaded from 5/25/2015. To make sure you get it, download before 5/25/2015. Stream instantly or choose to download later. Downloads will play on Xbox 360, PC, Zune player, Windows Phone. For more info, go to www.xbox.com/support.

Notably, Windows 8’s Xbox Video app also lacks such disclaimer about license expirations. It’s possible the lack of disclaimer may be related to the console appearing to use the same license scheme used by the PC version of the app. Videos that were exclusive to Xbox 360 and didn’t play on other devices don’t seem to be appearing for users in the Xbox One version of Xbox Video.

Neowin has contacted Microsoft regarding the download and licensing differences between the Xbox 360 and Xbox One versions of Xbox Video; this article will be updated if a response is received.

Update: Microsoft has provided the following response regarding the lack of downloading capabilities for the Xbox One:

Your Xbox Video collection is stored in the cloud so that it’s available wherever you go. You can access your collection of Xbox Video movies and TV episodes on Xbox One, Xbox 360, Windows 8/8.1 and online at xboxvideo.com.

The response confirms that videos cannot currently be stored locally on the Xbox One, and the lack of a statement regarding its future availability seems to imply the feature won't be added in the immediate future. Additionally, Microsoft provided the following response regarding the licensing policies for Xbox Video on Xbox One:

As is common in the industry today, studios can set different policies for their films. We are working with our partners to ensure their content is available for Xbox customers in all formats.

Given the response, it appears studios could still set policies limiting the availability of movies and TV shows through a certain date, similar to the example of "The Wolverine" seen above. If that's the case, Xbox One owners may be unable to watch content they've purchased through Xbox Video after the licensing date ends because of the lack of a downloading option. Users with slower Internet connections are out of luck altogether, as they may not be able to stream content without significant stuttering and buffering.