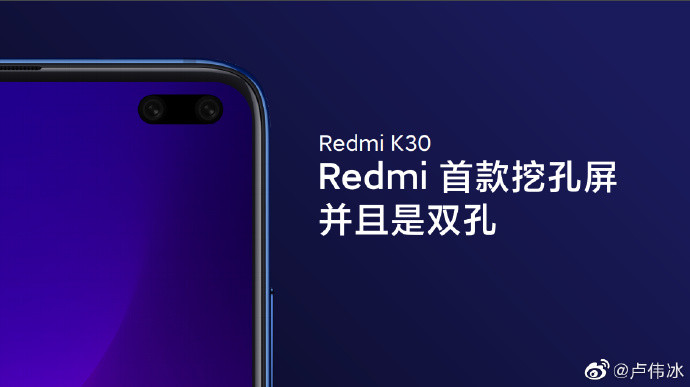 It was only several months ago when the Redmi K20 series was introduced, featuring a pop-up selfie camera as one of its main selling points. Today, Xiaomi teased the successor to that phone with a notable twist to its front camera design that resembles that of Samsung's Galaxy S10+.

The Redmi K30 will be sporting a display with a hole-punch cutout for the selfie snapper. It will also feature two lenses similar to the Galaxy S10+ front camera. Xiaomi's General Manager Lu Weibing shared a photo of the Redmi K30 during the debut of the Redmi 8 series in China after its launch in India.

According to Weibing, the Redmi K30 will be the first 5G phone to be coming out of the Redmi brand. The handset will also bring support for dual 5G, meaning it will be compatible with both standalone mode (SA) and non-standalone (NSA) mode of networking. The NSA mode is said to be cheaper in terms of deployment as it uses existing LTE infrastructure for things such as communication between cell towers and servers. There are rumors as well that the device will be powered by Qualcomm's upcoming Snapdragon 7250 SoC supporting dual 5G.

For now, specific details about the Redmi K30's specs remain unknown. There's no word as well on its pricing, but Weibing said it won't be the cheapest 5G phone. That said, the Redmi K30 will still be relatively budget-friendly just like Redmi's past phones.