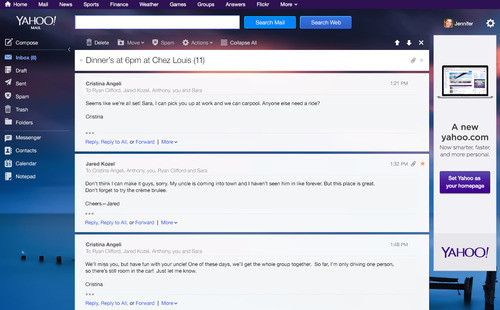 If you haven't been able to access your Yahoo Mail account, you are not alone. Yahoo has announced that a hardware issue is the cause of a disruption of its online email service that began on Monday evening in the west coast (or Tuesday morning in the east coast).

In a post on its Yahoo Mail status page earlier today, the company said:

Some of our users haven't been able to access their mail since 10:27 PM PT on Monday night, due to a hardware problem in one of our mail data centers. The issue has been harder to fix than we originally expected. We have dozens of people working around the clock to bring it to a resolution.

In the latest update, Yahoo says that most users of Yahoo Mail should now be able to access their accounts now but added, "We're continuing to restore access for all affected users."

Yahoo launched a major revamp of its mail service in October, but the reviews from many customers have not been kind. Yahoo reportedly sent a memo to its employees a few weeks ago asking them to switch from Microsoft's Outlook to Yahoo Mail. The memo may be one of the strangest corporate internal messages issued in recent years as Yahoo compared Outlook to an extinct dinosaur.