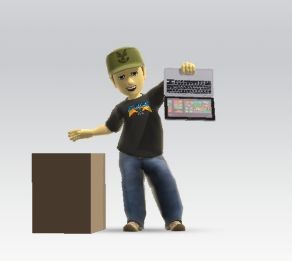 Do you want to get your hands on a free Microsoft Surface tablet? Of course you do. Today, it was discovered that Microsoft is indeed giving away a free version of its Windows 8/RT tablet, but don't get too excited – it's just for Xbox Live avatars.

In the free offer now available on the Xbox Marketplace webpage, the Surface avatar prop is available for both Silver and Gold Xbox Live accounts, although it's not clear if this offer is just for U.S. subscribers. Once you click on the offer, you will be able to see your Xbox Live avatar playing with the tablet. At first, your avatar presses the touchscreen on the Surface to listen to some tunes, presumably via Xbox Music.

After the avatar grooves for a few seconds to the music, a Type Cover magically appears and drops in the hands of the avatar, which then connects the keyboard and the tablet together, showing off the tight magnetic hold that the cover has on the Surface. Finally, the avatar places the Surface on a brown box and types on the keyboard to bring up the Windows 8 logo, before the Surface disappears altogether. It's fun, it's cool and, best of all, it's free.