Chinese smartphone manufacturer ZTE has officially launched its ‘Tania’ Windows Phone, after first announcing it back in September. The budget-friendly device looks set to bring Microsoft’s mobile operating system to new price points in the market, but the challenge of reducing the cost of Windows Phones was highlighted by comments made by a ZTE executive yesterday.

Speaking at the Tania’s UK launch in London, Santiago Sierra, Portfolio Manager for ZTE UK, explained to Trusted Reviews that the cost of licensing the OS from Microsoft results in higher pricing for its Windows Phones than for its Android devices. So far, manufacturers have remained tight-lipped on the exact amounts that they pay to Microsoft for each OS licence. 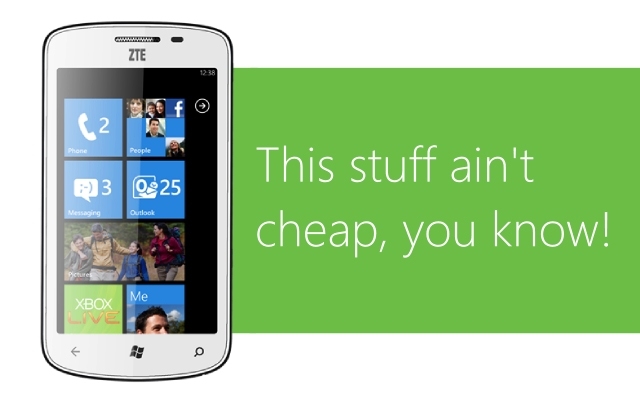 Given that Android is free for OEMs to install on their devices, it’s not difficult to understand why so many manufacturers have favoured this option over the costly Windows Phone licensing route. However, things are of course not quite so clear-cut, given that many Android manufacturers are still paying up considerable sums to Microsoft – and others – for patent licensing; this makes the Android vs Windows Phone argument a bit more complicated than “free vs paid-for”.

Even so, it’s interesting to finally get a (hopefully) reliable figure from a manufacturer on the true cost of licensing Microsoft’s OS, and it puts into context the difficulty for manufacturers of delivering low-cost Windows Phones to the market.

However, it’s worth considering the fact that ZTE isn’t a major player in the Windows Phone space yet, so it may well be paying more for its licences than much larger manufacturers. OEMs selling handsets in greater quantities – and therefore purchasing Windows Phone licences in greater volumes – are likely to enjoy discounts on their licensing costs for each handset, so the amount that HTC or Samsung pay to license each handset is almost certainly lower than the price that ZTE pays.