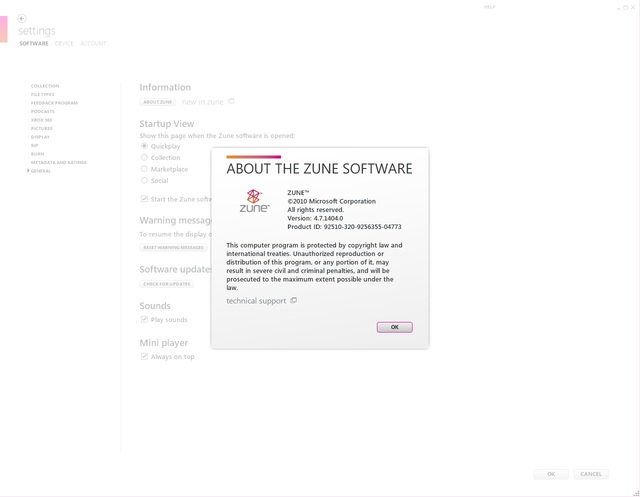 When was the last time you've received an update for anything that doesn't bump the version number, and goes unannounced? Probably not recently. But today, Microsoft pushed an update to their Zune desktop client which, on the surface, appears to have changed nothing.

The update, which popped up for many users today, is still yet to be announced by Microsoft, but does make a few changes under the hood. According to KeyboardP on Twitter, the update brings new versions of the "ZuneWMdu.dll" file, as well as its "related resources." If that means nothing to you, this DLL file is officially the "Windows Mobile Device Updater," so perhaps Microsoft is getting ready for the new version of Windows Phone 7 to drop in the near future.

It's odd that Microsoft would make such a change without stating the purpose of the update, or even bumping the version number, so we'll go ahead and assume that this update is in preparation for the first Windows Phone 7 update, which is due sometime this month.

WPCentral says that the new version of Zune is supposed to support backing up the phone content and applications in preparation for the upcoming update, but we're under the impression this functionality is already built-in and we just haven't seen it in action yet.

If you just can't wait for the update, you can download it manually by going to "Settings" in Zune, then hit "General" and "Check for Updates."

Update: Microsoft hasn't approved any applications over the last two days, which is very strange considering the company's push to fill the marketplace. On top of this, when the Zune team were approached about the update, they would not disclose what it was for.

Update #2: Some sites are reporting that the first Windows Phone 7 update is likely to be only pushed out via the Zune software. Neowin has learned that the software update may be available using either the Zune software, or "Over the air" if carriers decide to support it.

Update #3: Skipdeez on Twitter says that "the Zune Software update has a fix that impacted a limited set of users and we addressed it with a maintenance update." Funnily enough that "limited set of users" are experiencing an issue when Zune is backing up Windows Phone 7 to update the software.