It has been a few weeks since giving some initial impressions of the Google Home Mini. Since then, more time has been spent living with it, giving it commands, and assimilating into my daily life. The experience is quite interesting, in that, this is the first smart speaker I have ever used or owned. While this might seem like a huge statement, it really isn't. If you're the owner of a smartphone, chances are you already use a digital assistant like Apple's Siri or the ﻿Google Assistant, and effectively, the speaker is a product that houses a digital assistant and can work independently of your handset.

I can honestly say, that in my normal daily use, on a handset, I rarely request help from the assistant and just look up what I'm looking for using search. In my opinion, this is much faster and can be more accurate. But, this only works when you have your hands free and can punch in the query. What happens if you're on the road driving or in the kitchen kneading out dough for cookies - this is when a voice-activated assistant can come in handy. This shows that there is a place for this kind of technology and it can co-exist with the more traditional means of searching or activating apps. But can Google's $49 Home Mini smart speaker be useful enough to make it a worthwhile purchase? Let's find out. 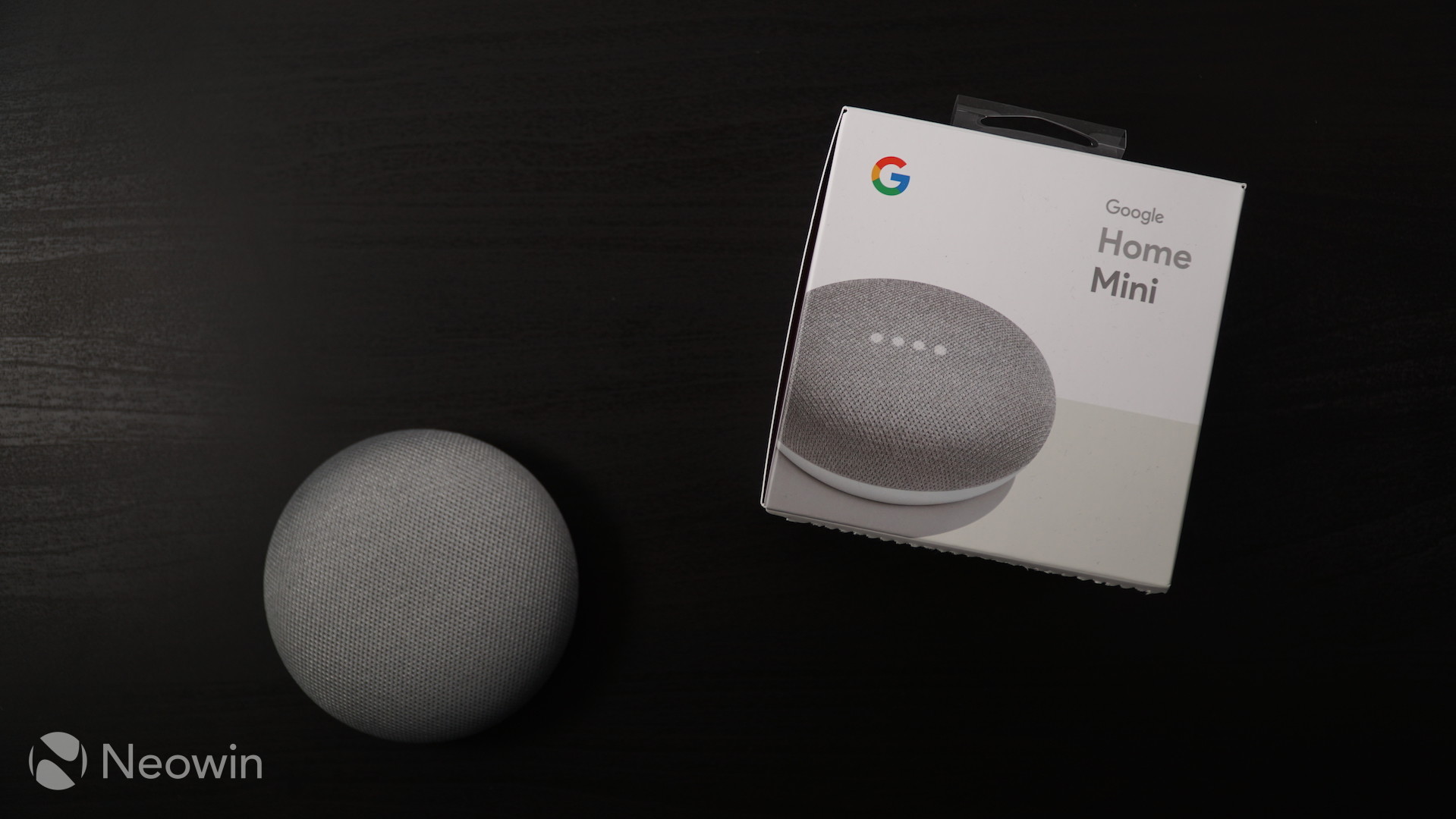 The Google Home is a small pebble-shaped speaker that has a diameter of about four inches and incorporates a modern design that should be able to accommodate most settings without looking out of place. It helps that it comes in three colors, but for this review we will be taking a look at the Chalk version which looks like a light silver. The construction of the Home Mini isn't complicated. It's a small speaker that is encased in a plastic shell with a cloth mesh portion on top that gives it a bit of contrast from its smooth white plastic base. Under the mesh, there are four LED lights that are used as indicators for various actions that are taking place. 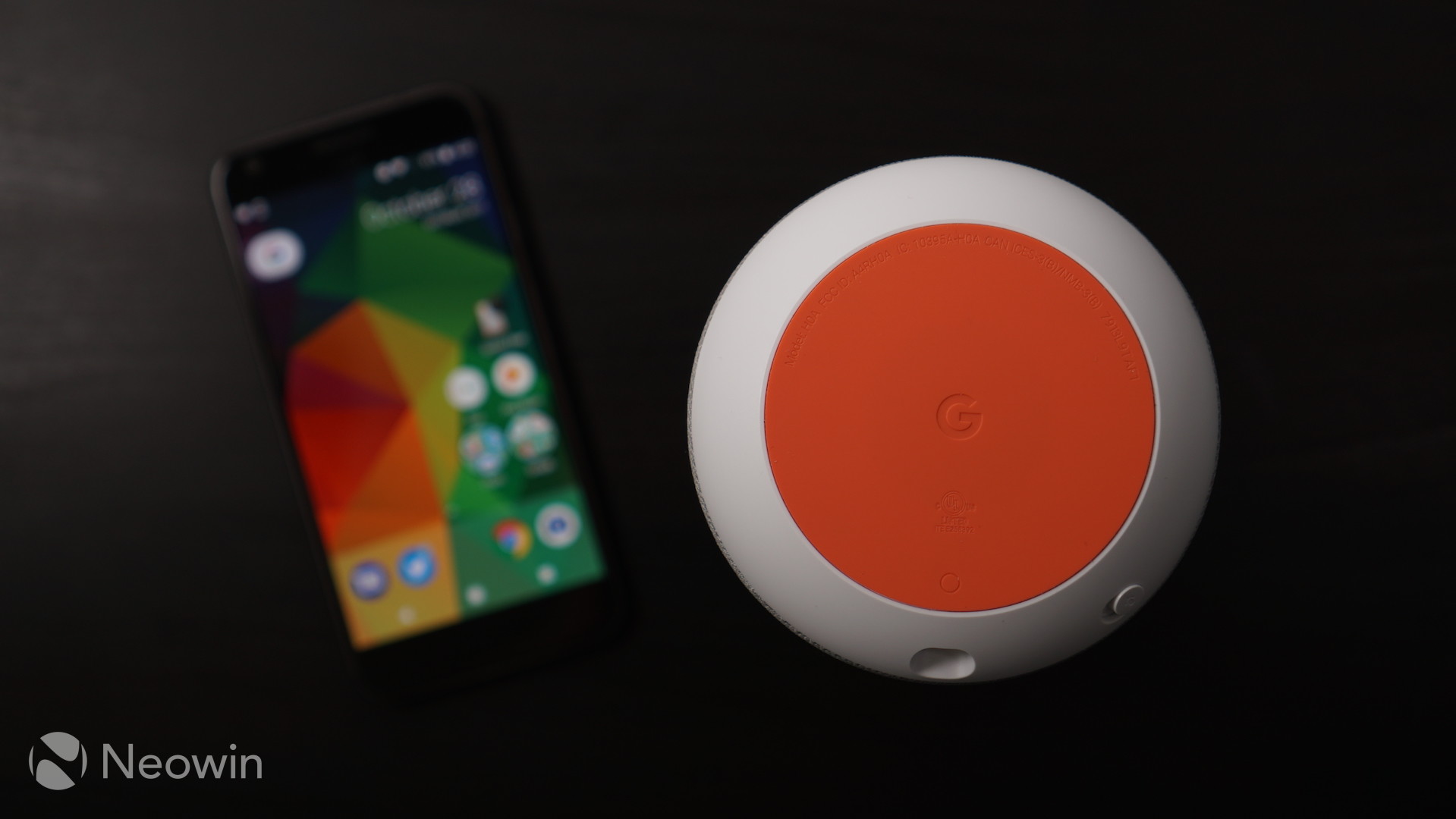 When first powered on, it will illuminate in Google's blue, red, yellow, and green color scheme but quickly fade to all white. The white color is what you will see most during use, pulsating when listening for a command or when processing. This will also show users where the speaker's volume is set, with each LED becoming brighter as the volume is raised and dimmer when it is lowered. 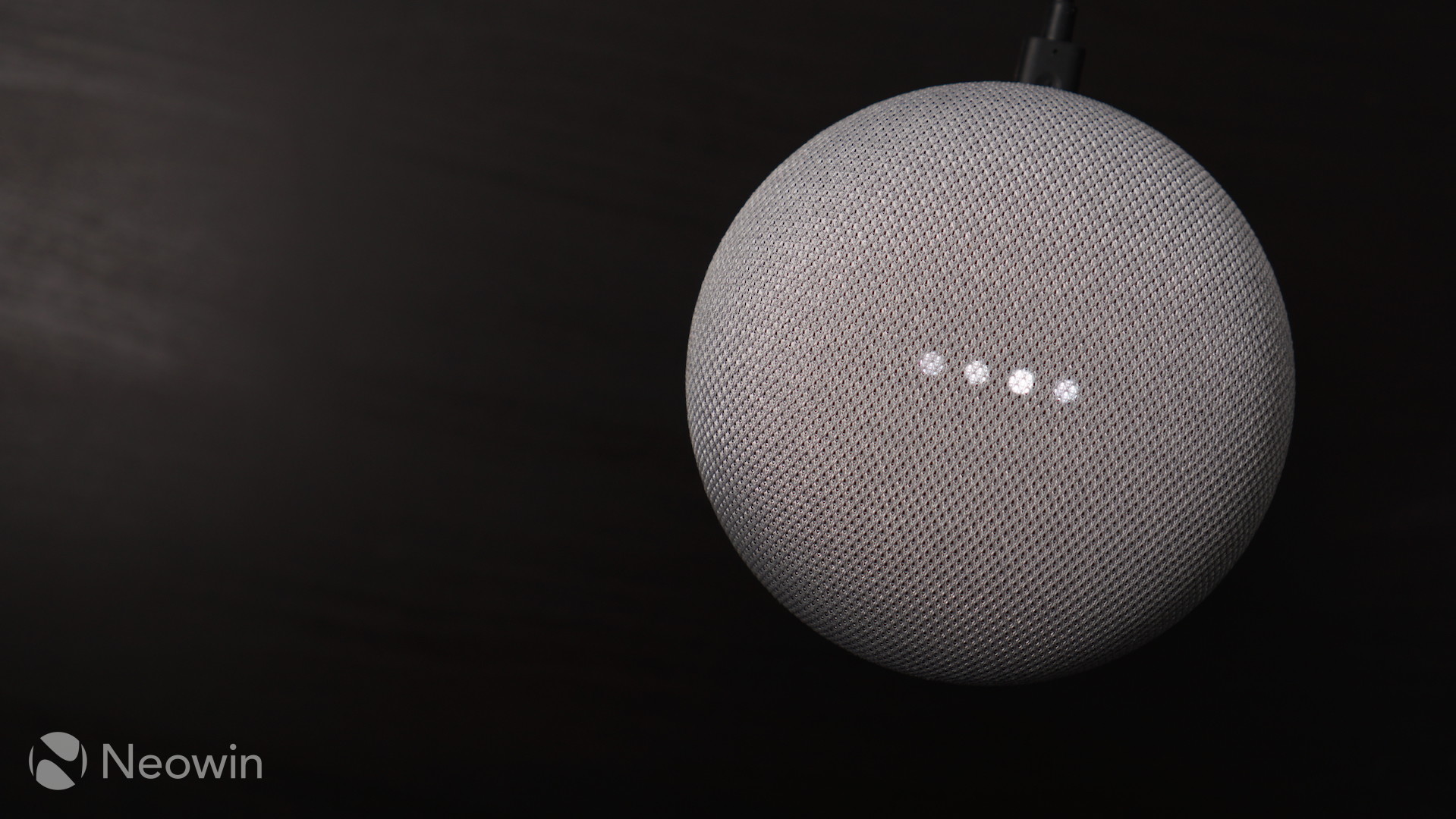 The majority of the interaction is done through voice or the Google Home app, but the unit itself does have one switch that is used to mute and unmute the microphone. It did have a touch activated section on the top that could be used to play and pause music and also summon the Assistant, but Google had to disable it due to some issues concerning privacy. This is a bit of a bummer considering that being able to tap the top of the speaker was highly convenient when you wanted to play or pause music. 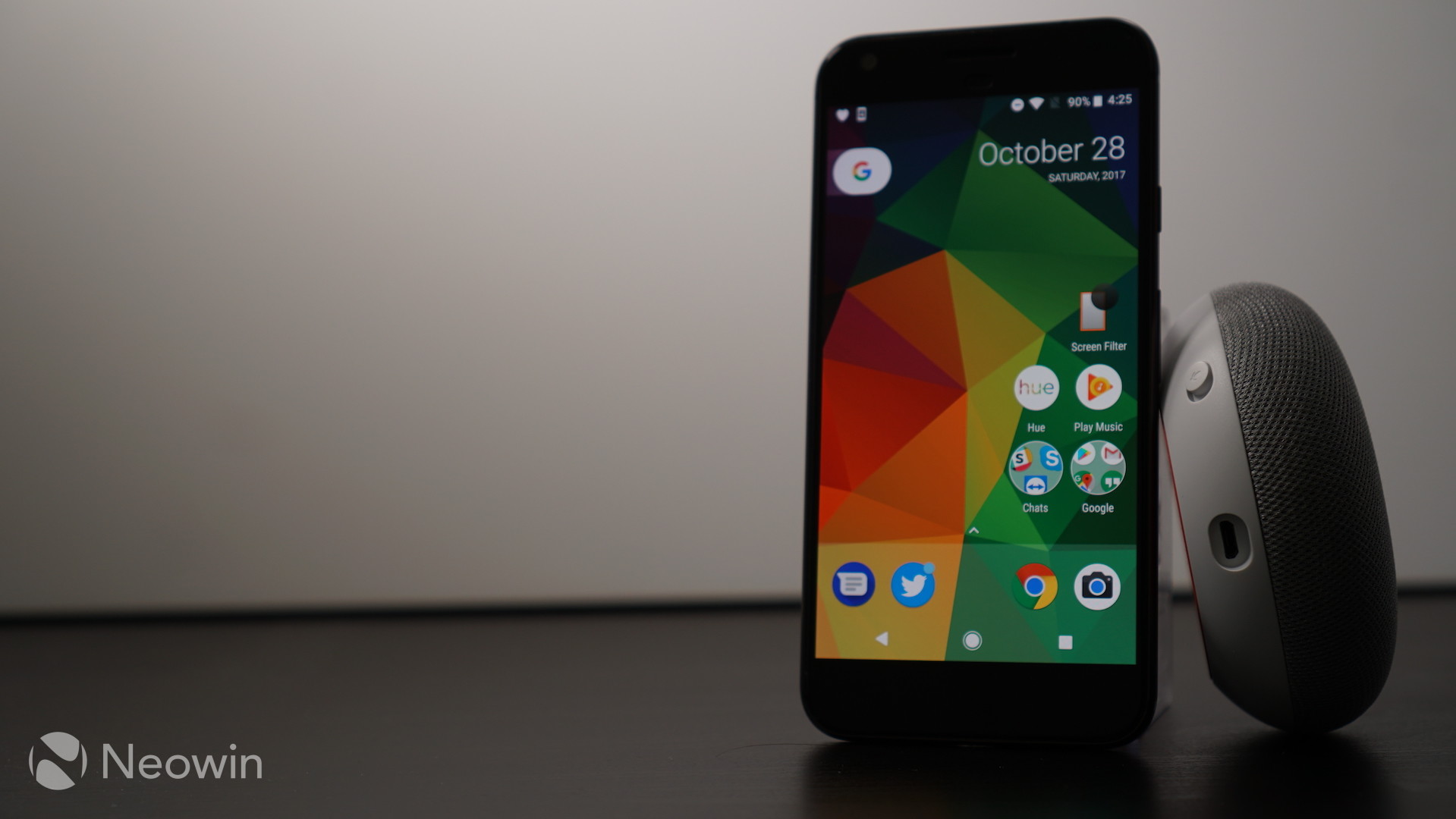 The speaker also has a power port that is Micro USB. Sure, it would have been nice if it was USB Type-C, but unlike a mobile phone, this will be plugged in once and rarely, if ever, taken off the power source. Those that are curious, yes, this can be powered from a external battery pack and can last up to four days using a 30,000mAh unit. This is something that most probably won't try or experiment with, but it can be done and I thought I'd note it. On the bottom of the speaker, there is a contrasting bit of bright orange silicone that you'll rarely see, but its main function is to keep the speaker grounded and prevent it from skidding across surfaces. 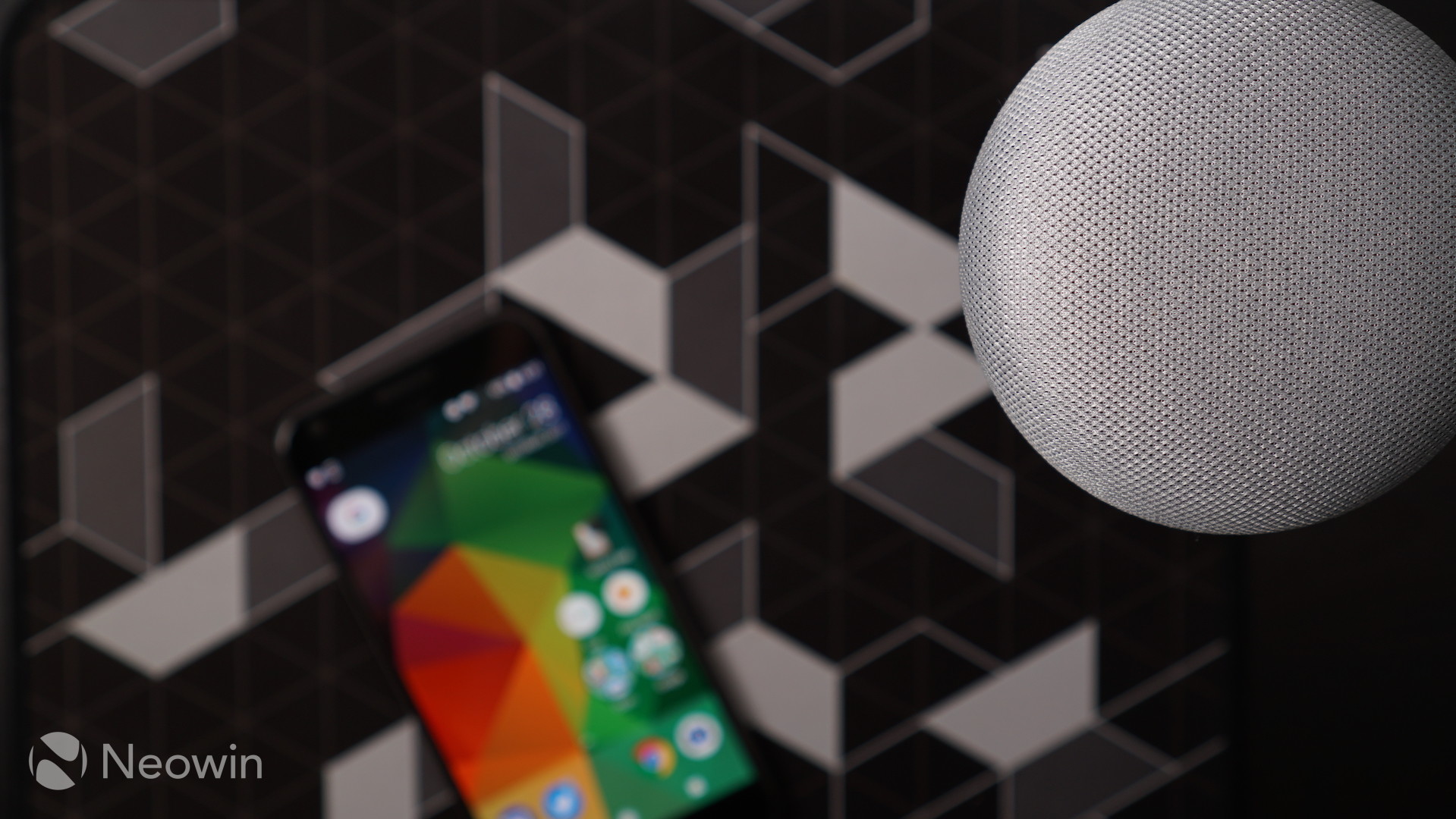 The Google Home Mini has a decent sounding speaker that provides enough volume for a small to medium sized room, we're talking maybe 250 to 500 square feet at maximum. While there is plenty of volume, the sound is definitely pretty hollow. You get your highs and a tiny touch of mids, but your bass is non-existent. It's kind of what you might expect from a small speaker so if you're looking for big sound, the Home Mini won't be for you. There is also a bit of caution that comes with cranking it up all the way though, as it seemed that the speaker would reboot every single time when playing music at max volume. I don't know if this is just exclusive to my unit, as in a physical issue, but you can bet there will be an update when a replacement model arrives. 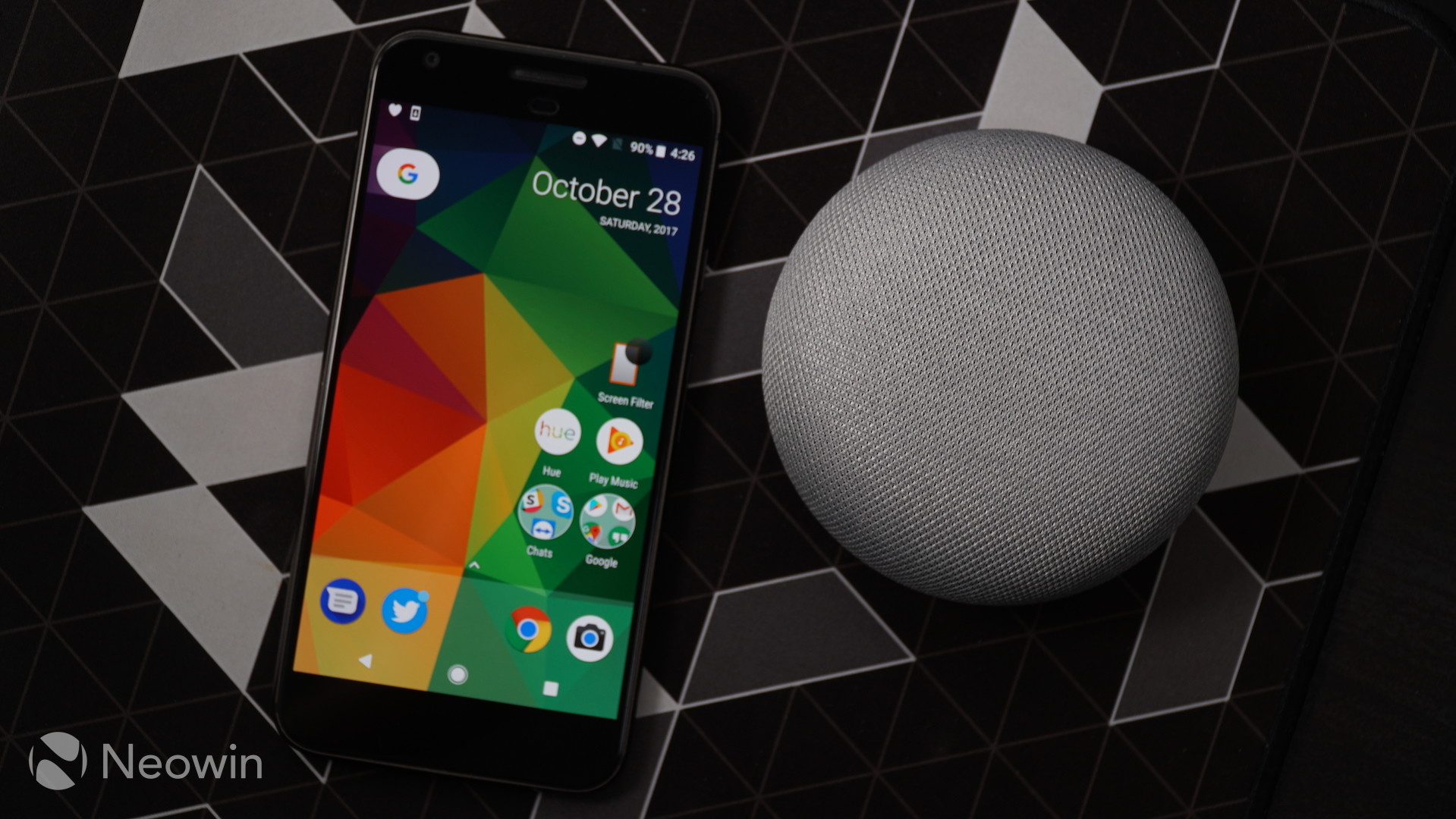 The smart capabilities is what you should take into consideration when buying a connected speaker and while Amazon has a commanding grip on the industry, Google has done its part in attempting to catch up. The experience with the Home Mini starts off with the Google Home app and requires setting it up with an active Google account. If you want to see what this is like, be sure to check out the unboxing video that was posted at the top of the month. This video will give you a great look at the setup process of the speaker and using the app, from start to finish. 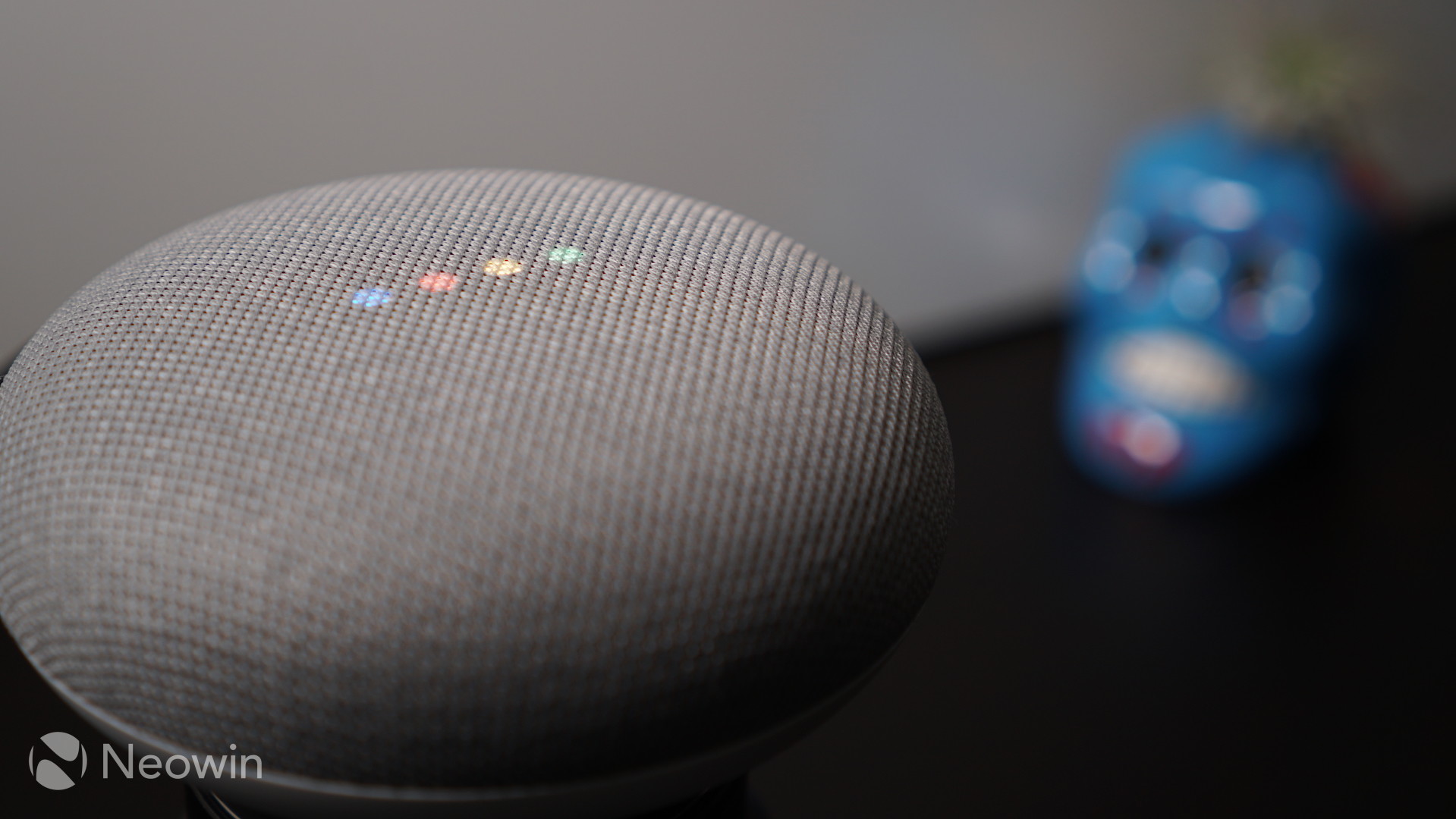 Once everything is setup, you can start talking to the speaker and ask it questions or request it to do things. For my use, I would ask it to play music on a daily basis. While this works well for the most part, the speaker doesn't always get it right, confusing easy requests and miraculously understanding more complex artists and song titles. The Google Home app does offer a few different options when it comes to sources for playing music like Google Play Music, YouTube Music, Spotify, and Pandora. If you're using anything else, I think you're out of luck if you're going to querying the speaker vocally. Since it is a connected device you can always cast using a phone to the speaker, but this requires a hands on approach. 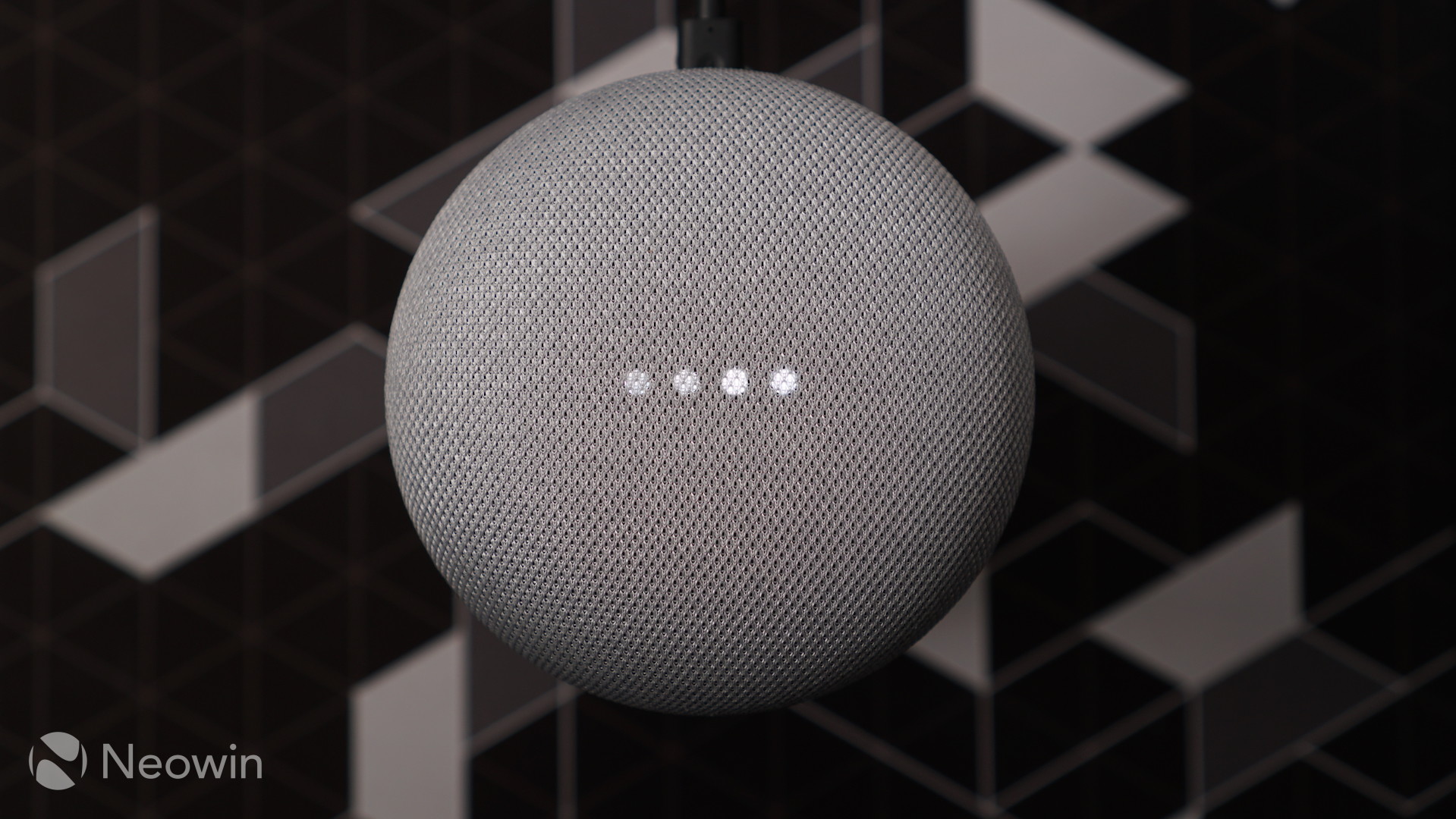 Beyond just using it to play music, you can also ask the speaker questions like "When does the sunset happen?" or "When do the Los Angeles Dodgers play next?", the list is pretty vast, but there are constraints, and after extended use, you'll learn that the interaction isn't always so organic as Google would like to make it. While things are interesting at this point, you can tell that this is a work in progress and that it is far from the final product.

The Google Home Mini can also control your smart enabled devices, for example, Hue products. The connection process is relatively straightforward and interacting with the lights is a breeze. You simply set up the lights in the Home app and after that can command the phone using the Google Assistant. This can range from turning lights on and off, to dimming them or brightening them. Although there is something magical about controlling your home with words, there are limits. You won't be able to ask the lights to strobe like a disco or request different light actions for multiple rooms in one go. It's more of an all or nothing situation, and sometimes, not even that. Again, it's just about understanding the limitations of the Assistant and requesting actions accordingly.

After using it for a couple of weeks, the Google Home Mini seems like a very good starting point for a smart speaker. It doesn't offer the best quality sound, but it is compact and also more affordable than Google's previous and current offerings. The Google Assistant works, but despite all the firm's claims of making it more organic, it still feels a bit mechanical. There is also the matter of the trigger phrase which is currently set for "Hey Google" that also happens to trigger the Google Assistant on Android devices, prompting them to listen for a request. Although this isn't a huge issue, it's still a bit sloppy and becomes more noticeable when guests are over with their mobiles, as their phones end up being triggered by my query. Yes, it's supposed to be smart enough to understand the difference with voices through its training, but this doesn't really seem to be on point yet.

Overall, it's really an experiment. The speaker quality is what you might expect for the price and the experience is a work in progress. While some things work, other things don't. Sometimes it's smooth to place a request, while other times Google's Assistant has no idea what you're talking about. This is a product for someone that is already comfortable using a digital assistant, as the speaker offers the ability to extend the experience. Someone that does not use a digital assistant will most likely not find much benefit from a smart speaker or will need to learn to embrace it more to see the benefit of this purchase. With that being said, the Google Home Mini is a reasonable purchase at $49, and won't break the bank if you find that it isn't fit for purpose .