Lenovo's ThinkPad T-series is the most popular in its vast lineup, and the T490s is the slimmed down version. Meant to be a workhorse, this machine won't let you down, promising solid performance, great battery life, and more.

It's the slimmer version of the ThinkPad T490, and it seems to be better in almost every way. Since this year's full-size T490 doesn't have a removable battery, the only real benefit of the T490 is that it has an option for discrete graphics.

The ThinkPad T490s weighs in at just 2.81 pounds, and with slimmer bezels, it now has an option for a 1440p Dolby Vision display. And of course, this year's model has Intel Whiskey Lake processors.

This is the unit that Lenovo sent me, and it doesn't actually seem to exist on Lenovo.com. You can obviously upgrade the specs to a Core i7 or a 1TB SSD, but if you choose the 1080p option with 400-nit brightness, that should come with 4G LTE. This unit does not have cellular capabilities.

The Lenovo ThinkPad T490s comes in both black and silver, although Lenovo sent me a black one as usual. The top is made out of a carbon fiber hybrid and the bottom is made out of magnesium, which is one of the reasons that it's so light, coming in at 2.81 pounds.

In fact, the weight is one of the best things about this PC. If you're not looking to spend the money on a ThinkPad X1 Carbon, the T490s takes the best of ThinkPad clamshells and puts it into a thin and light package.

The logo in the top-left is the standard silver ThinkPad logo, rather than the new glossy black one that we see on X1s. As is also the case with all ThinkPads this year, there's no Lenovo logo on the lid. It's just a flat black lid with the ThinkPad logo. 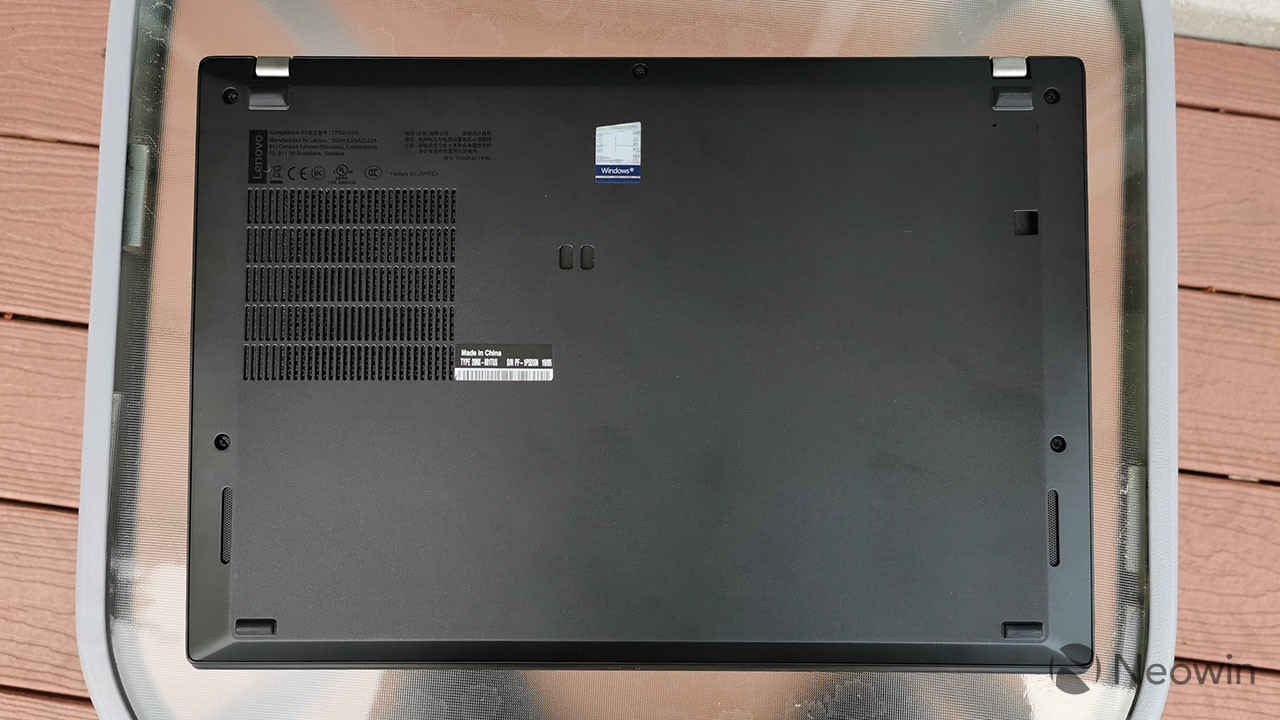 The general shape of the design is actually similar to a ThinkPad convertible, and I always notice this about the T4XXs models. The front of the machine is angled on the bottom, so it gives it a wedged appearance.

As is the case with all ThinkPads, it's built to be pretty tough, passing 12 MIL-STD-810G tests. That means that it can handle extreme conditions like humidity, vibration, shock, extreme temperatures, high altitudes, dust and sand, and more. 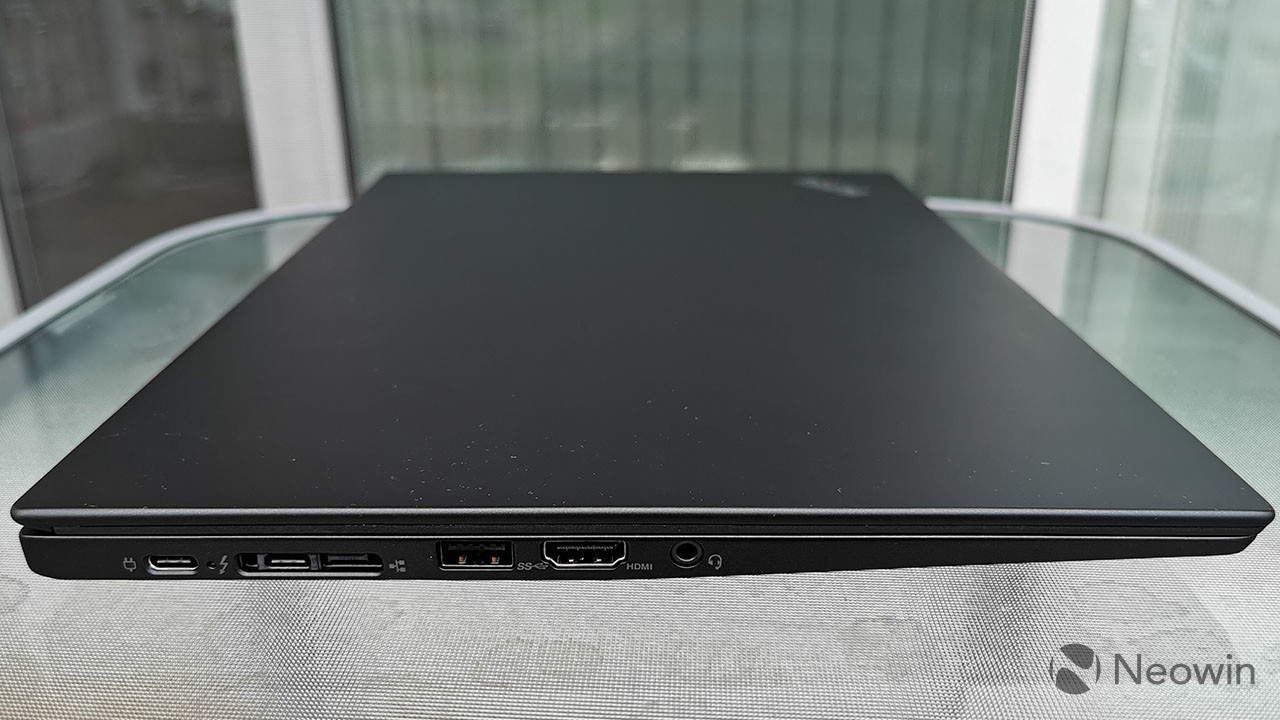 As you'd expect from a laptop like this, there are lots of ports to choose from. In fact, it's mostly the same as the T490. On the left side, there are two USB Type-C ports, one of which is USB 3.1 Gen 1 and the other is Thunderbolt 3. The latter can be used for mechanical docking with one of Lenovo's Thunderbolt docks. There's also a USB 3.1 Gen 1 Type-A port, HDMI 1.4b, a 3.5mm combo audio jack, and a port for an Ethernet extension connector. The Ethernet connector is built into the side docking station. 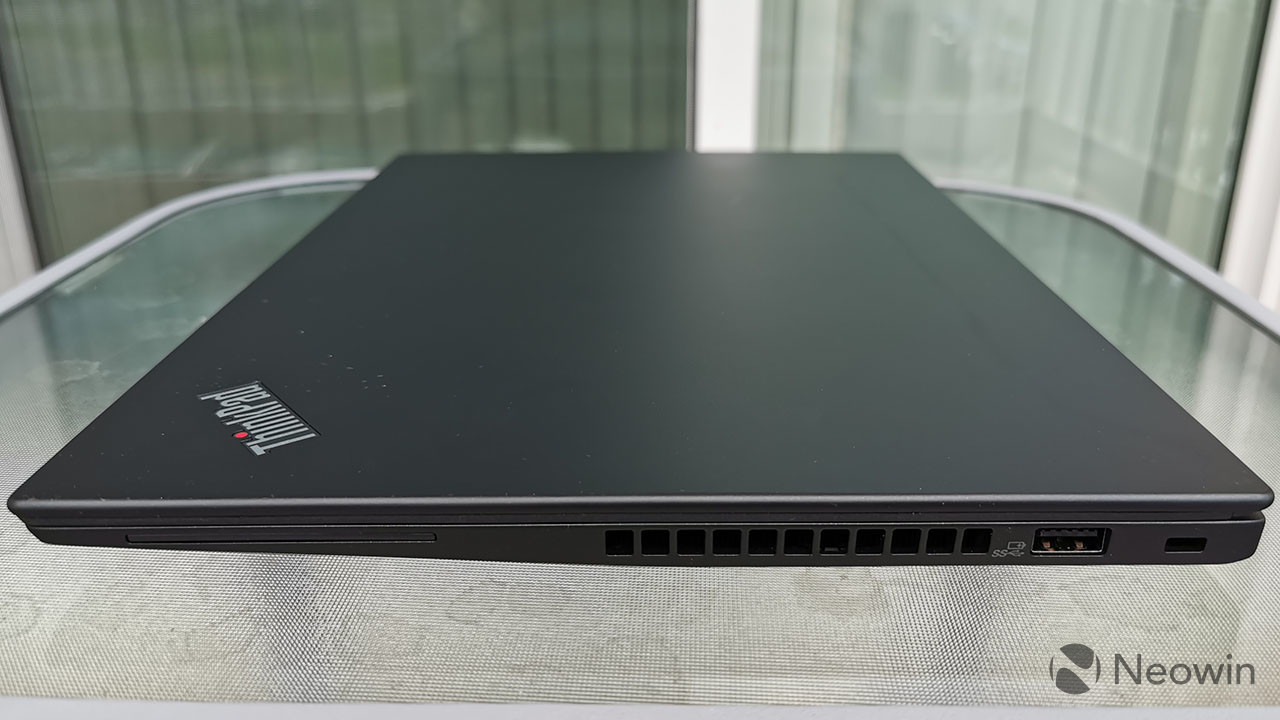 And on the right side, there's another USB 3.1 Gen 1 Type-A port, along with the optional Smart Card reader slot. You'll also find a slot for a MicroSD card in the back, which doubles as a SIM slot. Of course, if you don't get the cellular model, putting in a SIM card doesn't do anything.

This is something that I'm always frustrated with on ThinkPads. So many of them provide access to a SIM slot even if there's no cellular connectivity. The tray requires a pin tool to remove, so you won't be swapping out MicroSD cards frequently.

On the bottom of the device, you'll find dual speakers, and the bottom panel can be removed with five Phillips-head screws. There's no removable battery here, which is common for the thinner 's' model, and that used to be a reason to get the larger T-series laptop. 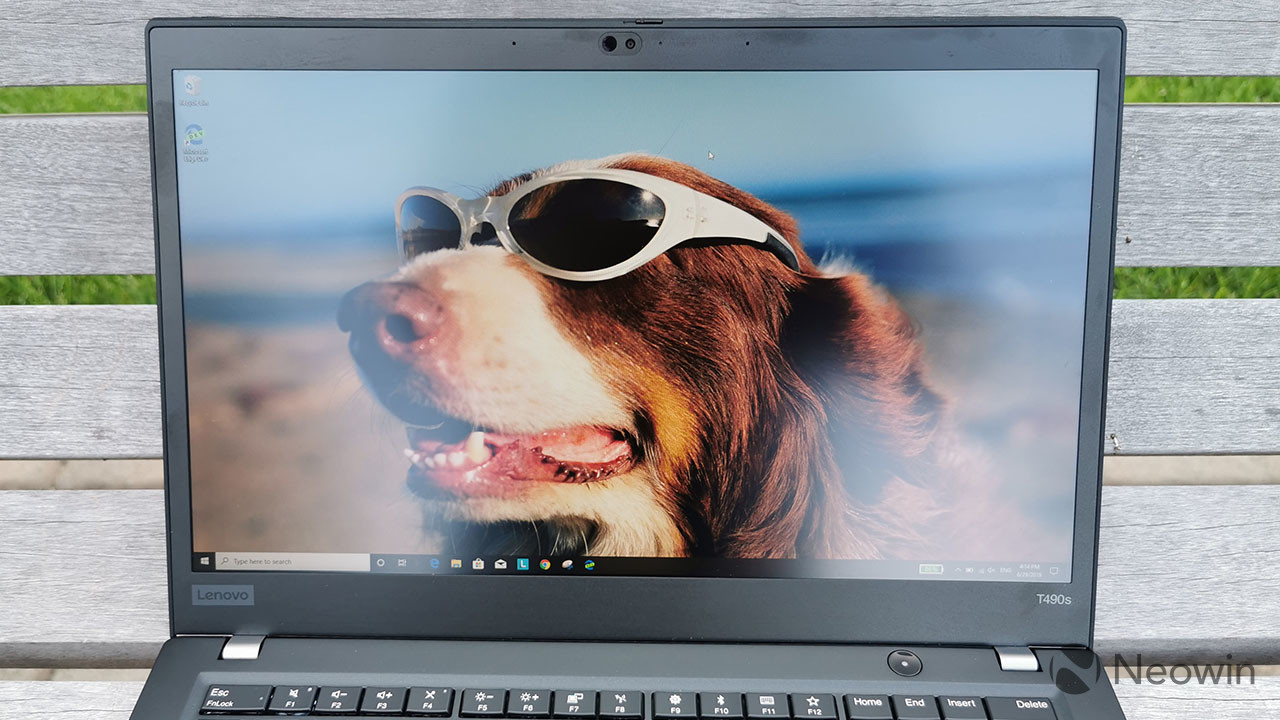 There's also an option for a touchscreen, which isn't included on the 400-nit panel. Personally, I think that it's fine without touch, at least on a clamshell laptop.

If you're looking directly at the display, it looks fine. It's not incredible like some other matte, anti-glare screens that I've seen recently, like the HP EliteBook x360 1040 G5. In some ways, the colors look a little washed out, just a little. The viewing angle isn't great either, as the colors get distorted when you start to look at it from an angle.

One thing I'll say though is that the screen looks great outdoors. I took all of these pictures in direct sunlight, and the display still looks great. 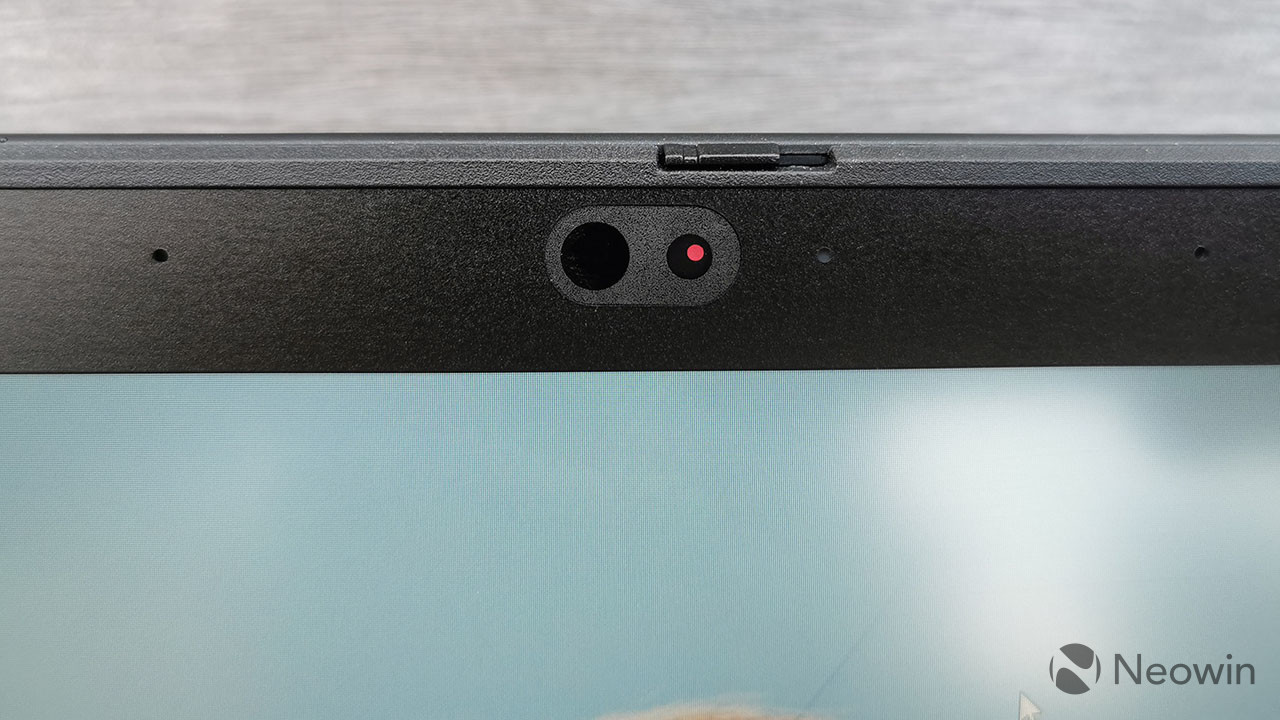 Lenovo has chopped down the bezels this year, making them 11% smaller than the T480s. The top and bottom bezels are larger, of course, making room for a webcam and an IR camera on top. The nice thing this year is that you can have both the IR camera and the ThinkShutter privacy guard, whereas last year you had to choose between the two.

As is almost always the case with it comes to ThinkPads, the keyboard on the T490s is phenomenal. It's comfortable, accurate, and quiet. ThinkPad keyboards seem to have the perfect amount of resistance, making for a comfortable typing experience 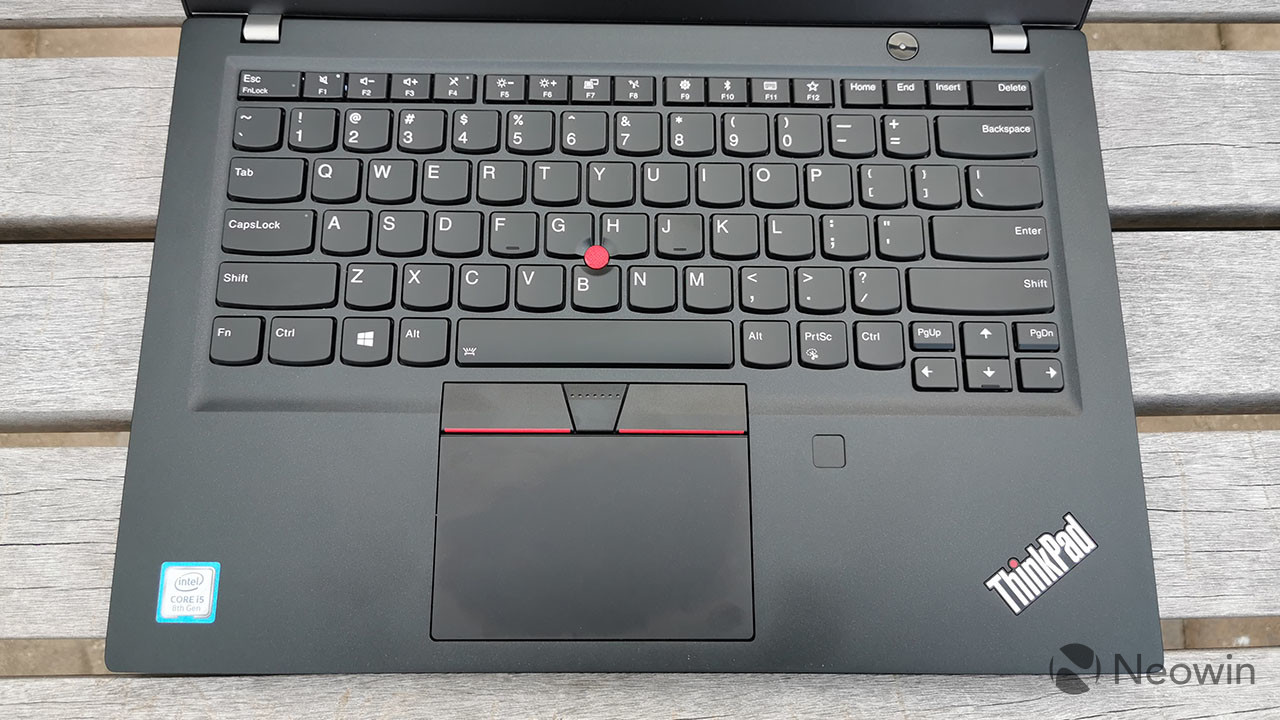 It's accurate as well, so you won't get any accidental double-presses or anything like that. To me, this is one of the strongest parts of the ThinkPad brand. You can buy a ThinkPad and know that it's going to have a great keyboard. There's no guessing there, or having to trust someone's review (like mine).

As always, the Fn key is to the left of the Ctrl key, one of the most annoying things about Lenovo's business keyboards. The good news is that you can swap them through the Lenovo Vantage app, making the Fn key act like the Ctrl key. 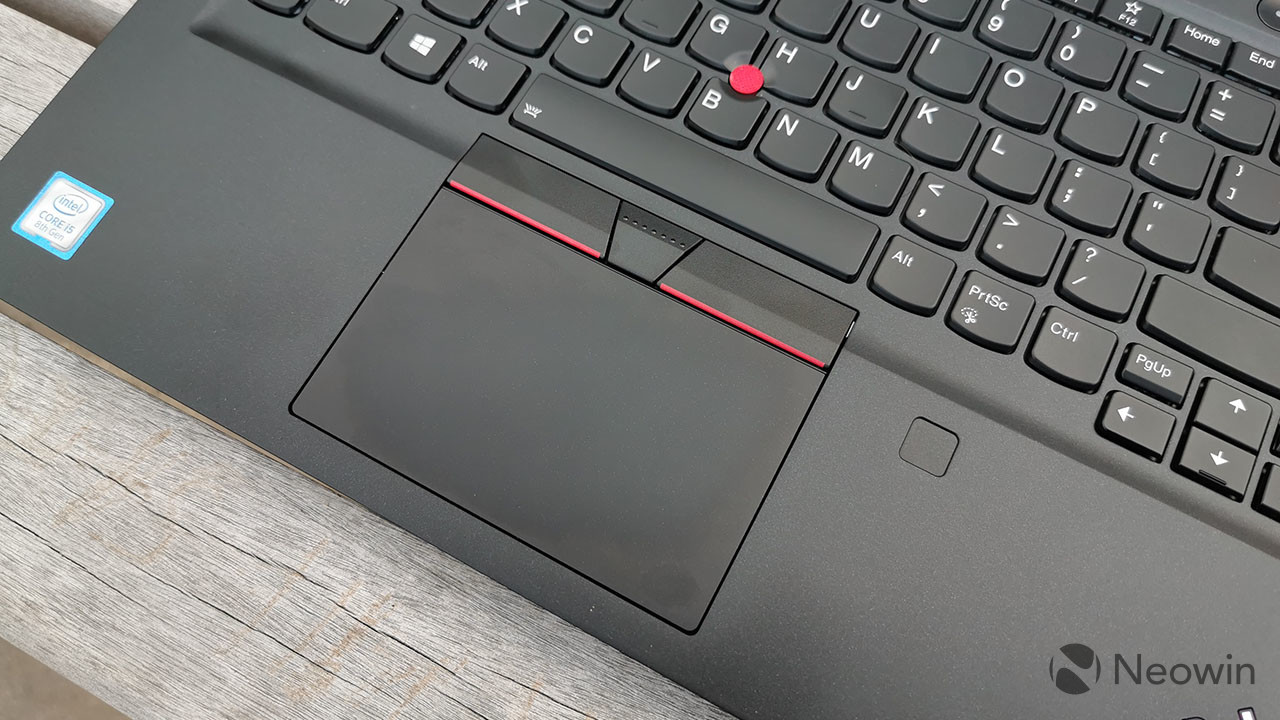 The TrackPoint is located between the G, H, and B keys, and you can use that to move the cursor around if you'd like. If you've never used one, it takes some getting used to. The trackpad has three physical buttons above it, which you can use to click with the TrackPoint.

Personally, I like using the trackpad - which is already clickable - with the physical buttons. It makes drag-and-drop really easy and convenient. The use of the left and right buttons are obvious, but the middle button can be used for scrolling. Naturally, the trackpad also uses Microsoft's Precision drivers, so it's better than any that don't. Most modern high-end PCs have Precision trackpads these days though.

The ThinkPad T490s that Lenovo sent me includes a Core i5-8265U CPU and 16GB RAM, which is a common business SKU. I feel like an i7 goes better with 16GB RAM, but I didn't run into any performance issues.

The Core i5 is from the Whiskey Lake family, or the second generation of eighth-gen chips. It's quad-core with eight threads and has a 15W TDP. The nice thing is that this CPU comes in a base model, so there's no Core i3 variant. You can also have it configured with a Core i7-8565U, or the vPro variants of the i5 or i7. Unfortunately, RAM maxes out at 16GB. 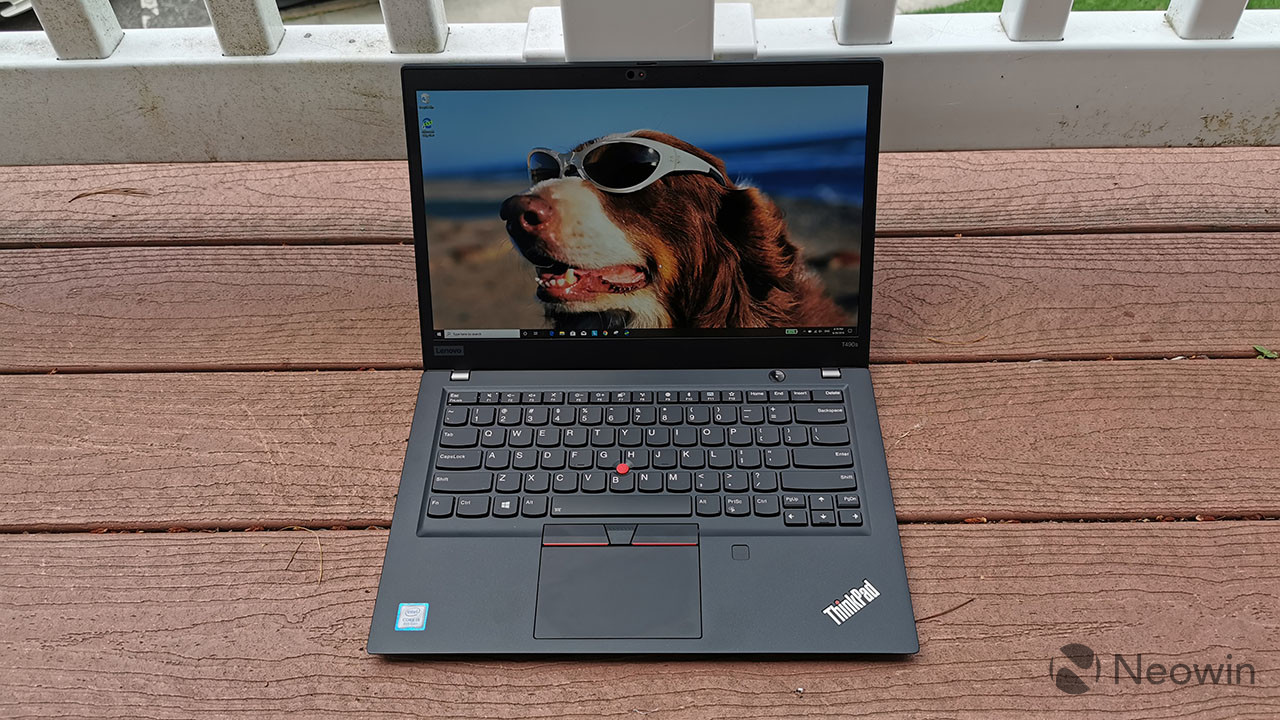 As I'd expect from a PC that's generally branded as a "workhorse", the T490s did not let me down. It was able to handle all of the tasks that I put it through, choking up a bit on things like video editing. That's to be expected though. After all, there are plenty of PCs with a Core i5, integrated graphics, and 16GB RAM, so the performance is never far off from each other.

The main thing that you'll want to use this for is productivity, using things like Microsoft Office, working through web browsers, Skype, OneNote, etc. If you're doing more GPU-intensive things like playing games, editing video, and so on, then you'll want a dedicated GPU. That's probably obvious to you though.

Battery life is fantastic, as it doesn't struggle to get a full eight hours of real-world use. The 15W Core i5, combined with a 1080p display and a 57Wh battery does the trick. Obviously, you'll get less battery life from the QHD model. As it generally goes, the higher the resolution of the display, the brighter the display, or the more powerful the internals, the lower the battery life. It also includes Lenovo's Rapid Charge, getting 80% battery within 60 minutes.

The results of the test are pretty good, as good as most Core i7 machines I test. Typically, you can see a clear difference between i5 and i7 in benchmarks. Next up is the Creative test, which checks more GPU-intensive tasks like video editing, mainstreaming gaming, and more.

Once again, it scores pretty well, better than 63% of all results. Finally, the Work test focuses on productivity-related tasks like writing and spreadsheets.

Once again, the T490s did great on benchmarks. Finally, I ran the all-in-one test in PCMark 10, really just for those that like to keep score.

The Lenovo ThinkPad T490s is a pretty great laptop, and particularly so because I can't think of any real drawbacks to buying one. Perhaps the biggest con is the display, which is somewhat mediocre. Also, if the Dolby Vision option is like the T490 that I reviewed, it's not as good as other Dolby Vision screens that I've seen on Lenovo PCs. 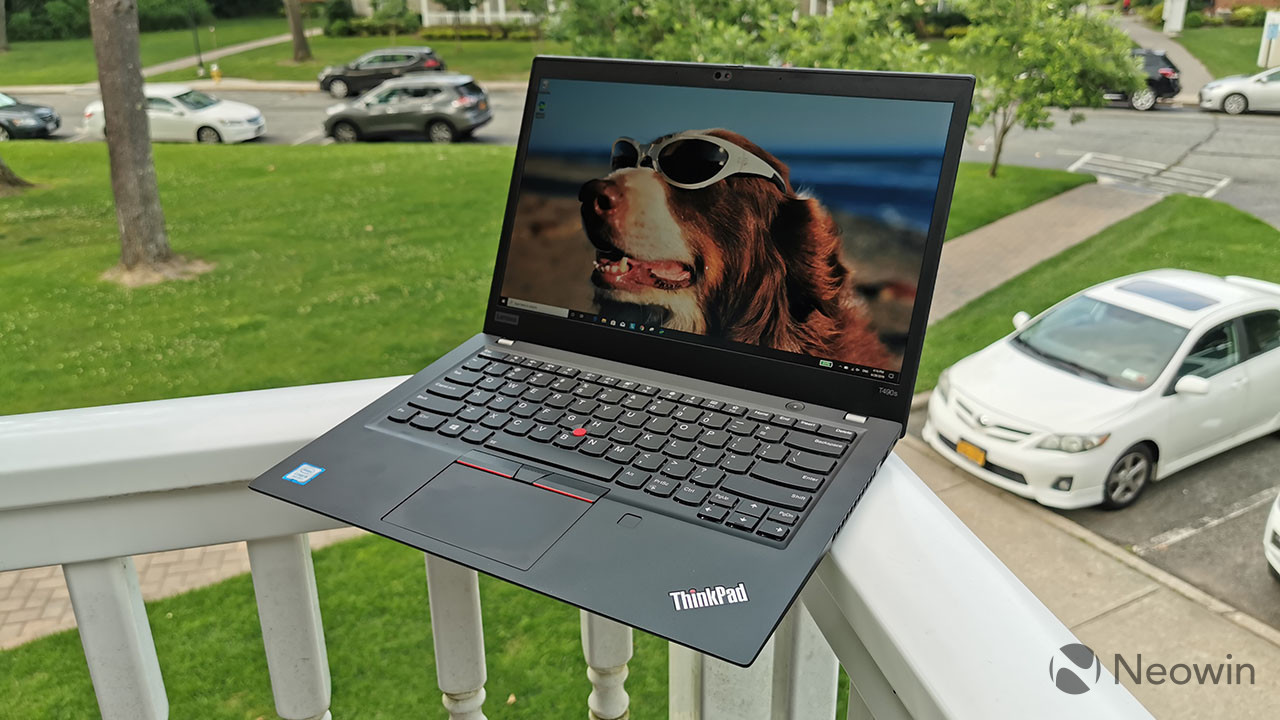 The rest of it just checks the right boxes though. It's 2.81 pounds, so it's easy to carry around, but you're not making sacrifices at that weight. The performance is phenomenal, even with a Core i5, and it also has great battery life. I'm really not sure that there are any meaningful sacrifices made by going with the slimmer alternative to the T490, other than the lack of the discrete GPU option.

It has loads of ports, and if for some reason the battery does let you down, Rapid Charge lets you juice it up to 80% in 60 minutes. There's a ThinkShutter privacy guard on the camera, so you don't have to put tape over it, but you don't have to give up the IR camera for Windows Hello. 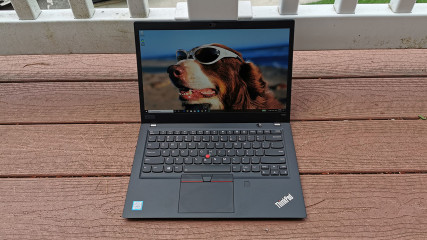 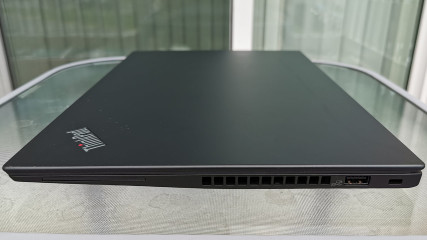 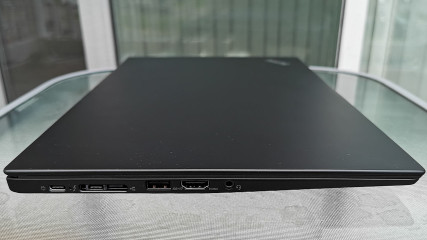 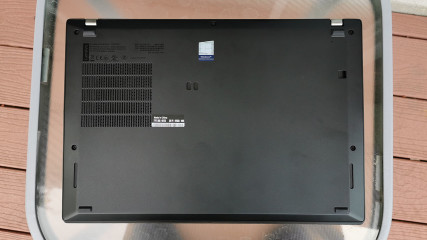 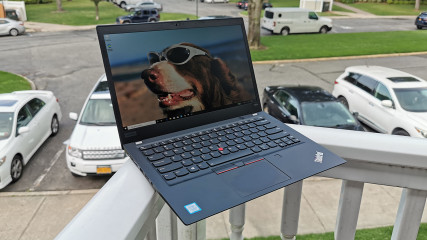 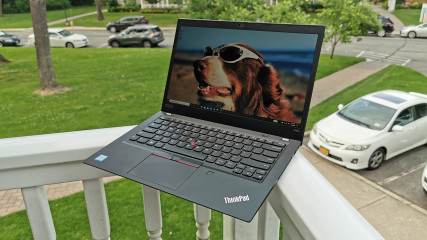 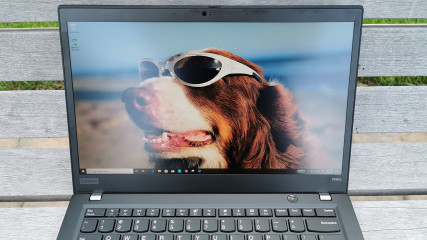 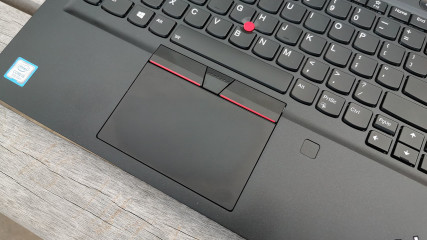 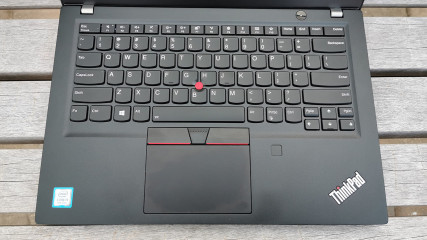 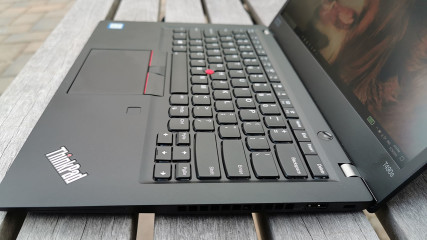 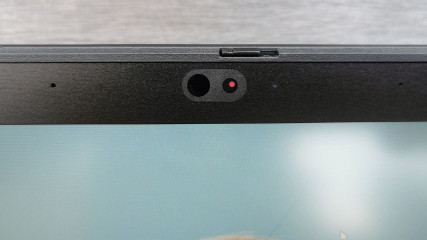 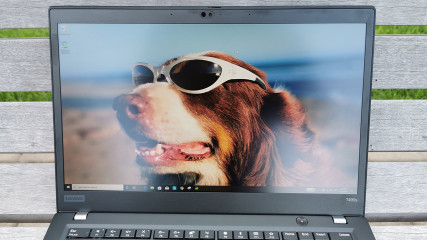 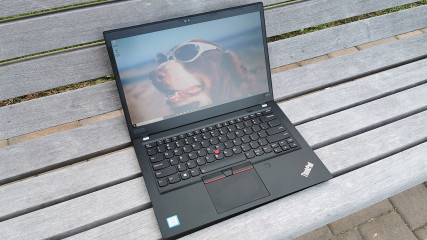 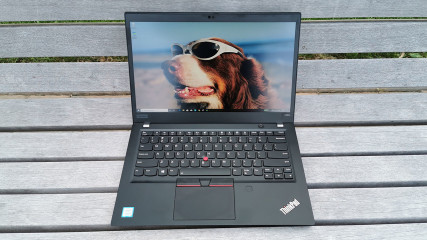 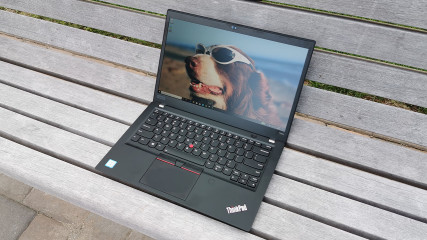