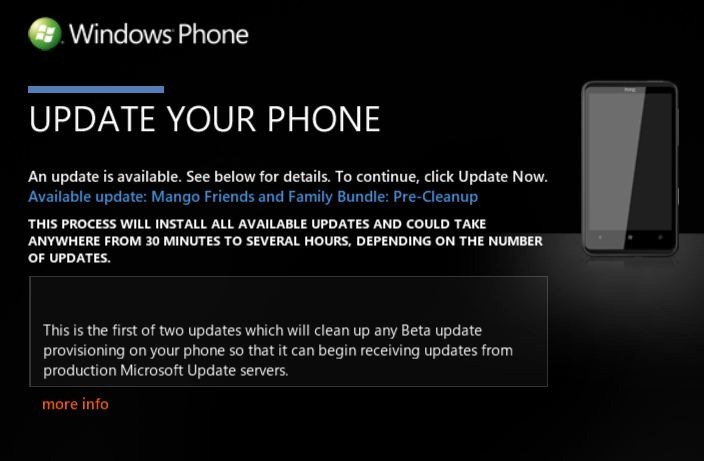 It appears Microsoft is beginning to roll out the Mango update to retail Windows Phone devices, but it's something we haven't seen before. The update is entitled the "Mango friends and family bundle," and actually doesn't contain the Mango bits.

According to Windows Phone NZ, the update is the first in a series of two updates that clean up any devices that have had the beta bits loaded onto them. According to the description on the update (which is available in Zune) it will "clean up any Beta update provisioning on your phone so it can begin receiving updates from production Microsoft servers."

This could mean that those on the early beta builds -- such as the pre-RTM 7712 build -- may not need to roll back to NoDo to go to Mango. That's fantastic news for anyone (like us!) that lost their backups.

Mango is just around the corner, and we expect to see it rolling out across most carriers by the end of this week. A leaked AT&T memo last week pinned September 27th as "Mango" day. We can't wait to get our hands on the juicy bits!

Update: It has been confirmed to Neowin that Microsoft has announced internally that developers will not have to roll back. That's good news for everyone!