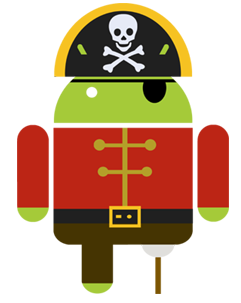 Due to its open nature, the Android Market is no stranger to piracy enabling apps, but it's interesting that Google has done nothing, even though the app, MP3 Music Download Pro, has been getting a lot of attention lately. Apple would've nipped it in the bud a long time before it got anywhere near the top charts. According to PC Magazine, the RIAA sent a take down notice to Google back in August, and guess what? Google actually declined to remove the app.

Google has a pretty good track record for removing pirated materials from its other services, like YouTube, so it's surprising to see them standing up against the RIAA. Back in September, Google said that they had built in processes that would bring the average response time to take down requests down to 24 hours or less. Even if those processes were working like Google wanted, the problem is really with the Android Market.

With no oversight, more infringing apps take the place of those removed almost as soon as they're taken down. Since Apple screens all apps before letting them go live on the App Store, apps like this usually don't get past the review process.

Google began sending out invitations to what is rumored to be the launch of their own music store, which will be held on Wednesday, November 16th in LA. A lot of money is on the line with the service, so it's strange that they would be allowing applications that could hurt their sales (not to mention being illegal) to stay on their own market. We'll see if they take any action on MP3 Music Download Pro in the next few days, but they still face a serious long term problem of keeping such apps off the market place in the future. It'll be in their best interest to keep such apps out after they launch their own music service, but without a review process it's going to be a task that's easier said than done. Yo-ho-ho