I've been off of Facebook for a year now, and I'm slowly weaning myself off of Twitter. For a variety of reasons, I've been on a slow social media purge, which means shying away from (as of August 2017) the single biggest source of news for most people - for better or worse. This left me with two options:

Start reading newspapers - like some sort of a fossil - or, invest some time and effort into an RSS reader. The latter made more sense to my millennial mind, so hunt around I did. This lead me to Readable - an RSS feed aggregator, made by a certain 'Ponn', identifiable only by the developer tag on its Microsoft Store listing. 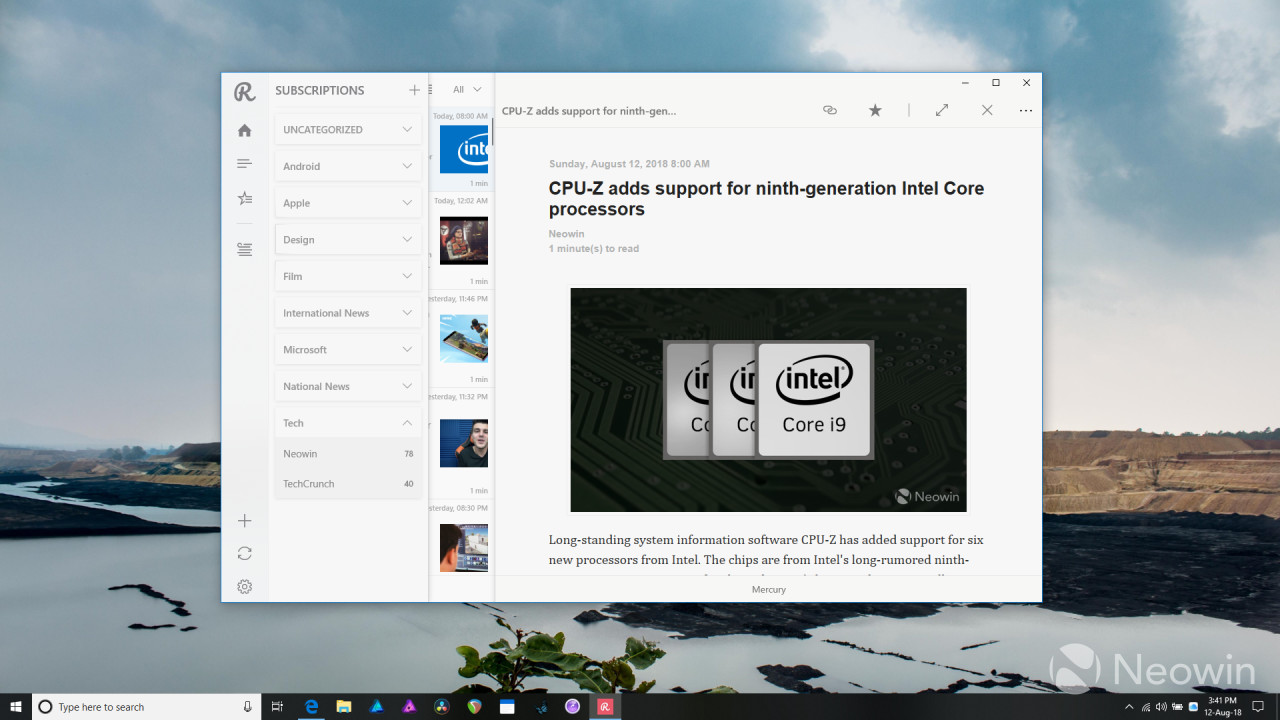 Readable looks great. It has an elegant UI, with neatly formatted stacks of text as far as the eye can see, and a clearly identifiable hierarchy to the interface. When maximized, the app is split into four columns which, as you'd expect, collapse when you reduce the size of the window. There's no discernable acrylic pane, usually common among most well-made UWP apps that follow Microsoft's Fluent Design paradigm to the T, but the app itself looks svelte enough for it not to be too big of a deal, if at all.

When it comes to the UI itself, my only critique so far is the very conspicuous lack of a dark mode. What we have currently is a light mode (of course) and an unusual sepia mode, which is the default setting. 'Unusual', because it only colors the pane with the article in it and leaves all the other columns a far brighter shade of white. This might make sense when using the app on a phone, but much less so on a PC. 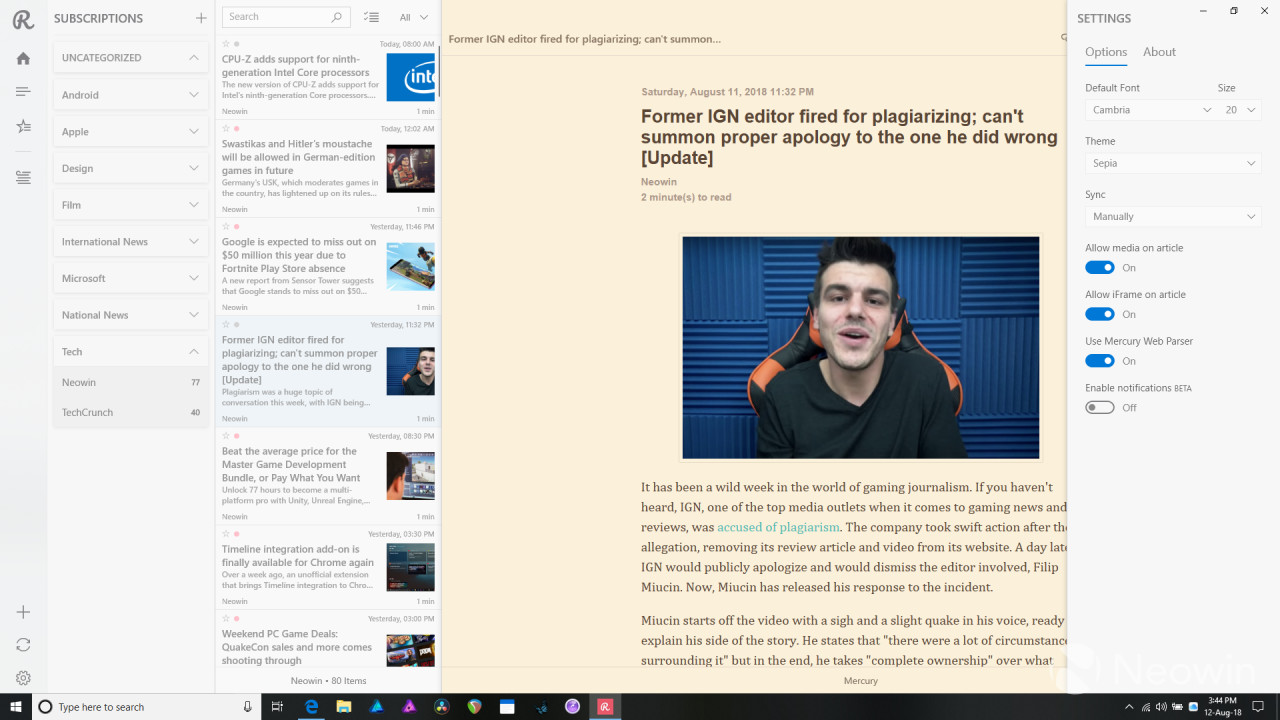 Adding news sources is a delightfully simple affair, especially for a bare-bones RSS reader - the app comes preloaded with a simple search engine, so just typing the name of your source into the text box is enough. No messing around with RSS links or website URLs necessary.

Grouping new sources into categories is also quite easy, with touch friendly drag-and-drop operations from the default 'uncategorized' folder to your category of choice. A nitpick here would be that said uncategorized folder doesn't disappear - automatically or otherwise - when it's empty, leaving the more attentive of users with an unsightly and empty category.

The settings pane is rather simple and well-laid out, too. It offers users the option to switch around fonts, themes, and intervals, aside from providing optional support for the Mercury Web Parser (which can be found, for instance, in Reeder 3 for iOS, too!). That one allows users to load full articles in the reader pane instead of truncated ones. 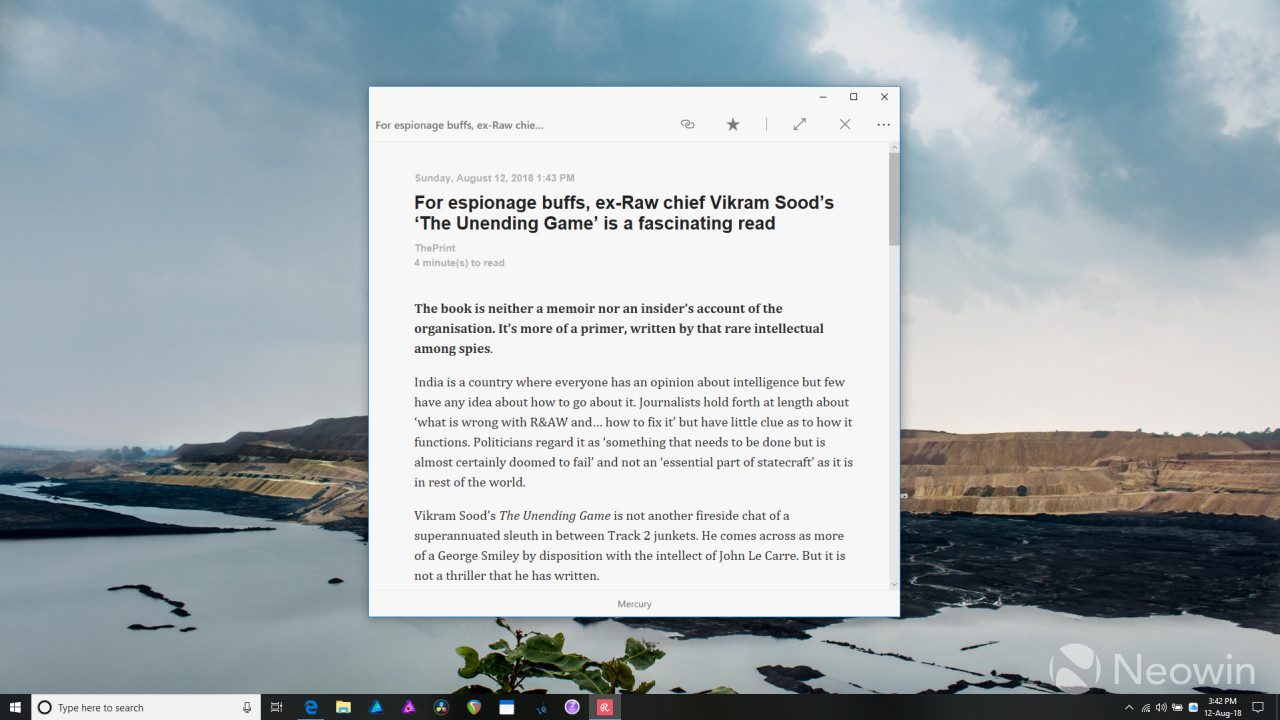 There's honestly not much else to talk about here, given how bare-bones the app is, which is beneficial for both the dev and the user. One need only set up the app a single time and then ignore everything else in it but the articles, until the heat-death of the universe.

Personally speaking, if there's one thing it lacks, it's Feedly support. I'd love to be able to use this in tandem with Reeder 3 on my iPhone - which means synced read statuses for all my subscribed sources - something I simply can't do without.

Readable does what it's meant to do with aplomb. Its user interface is crisp and clear, and the experience of using it is, simply put, simple. If it gained Feedly support and a suitable dark theme, I'd be very comfortable calling it one of the best RSS aggregator apps I've used, and possibly the best one you can get on Windows.

You can snag Readable for Windows 10 PCs from the Microsoft Store here for $9.99.