It also comes with a new Chrome OS tablet UI. If you detach the keyboard, all of the apps you're running go full-screen, and you can use gestures to navigate. Unlike what Microsoft did with Windows 8 and Windows Phone 8, these new Chrome OS gestures are almost identical to what you'll find on the latest versions of Android. That way, it's new, but you already know how to use it.

What's cool is that this is actually a pretty good tablet, mainly because it has a nice display. With Chrome OS, you get the full array of Android apps in the Google Play Store at your disposal. And then of course, you can snap on the keyboard to get some work done.

The Lenovo Chromebook Duet definitely looks like something inspired by Google's Pixel lineup. Made of an aluminum alloy, it has a two-tone design, with an Ice Blue top and an Iron Grey bottom. All-in-all, it looks pretty premium. 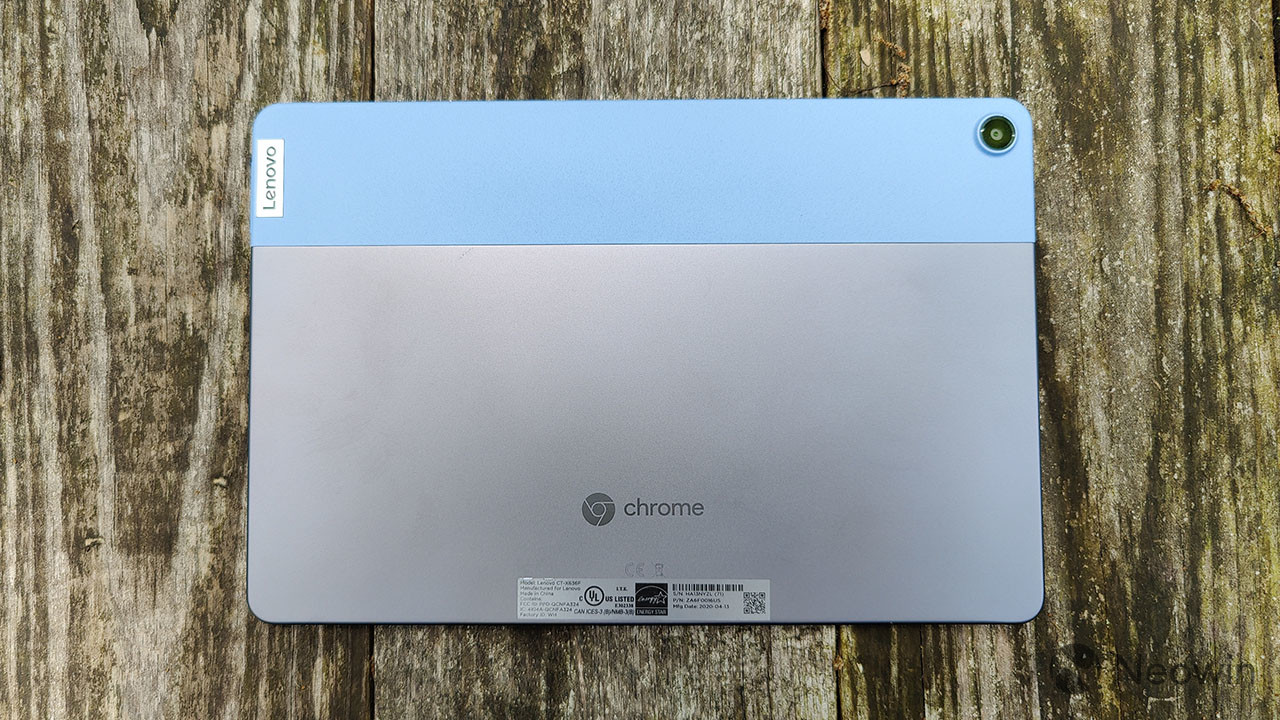 It's also very small and light. The whole package weighs in at just over two pounds, and the compact footprint makes it super easy to carry around. Being made of aluminum, it's quite stylish when compared to other devices at this price point. I'd have expected a lot more compromises here.

The Chromebook Duet actually comes in three pieces, all of which are included in the package. First, there's the tablet with its two-tone design. On the right side, there's a lone USB 2.0 Type-C port, which supports DisplayPort but is clearly meant for charging. There's also a power button and volume rocker on that side. 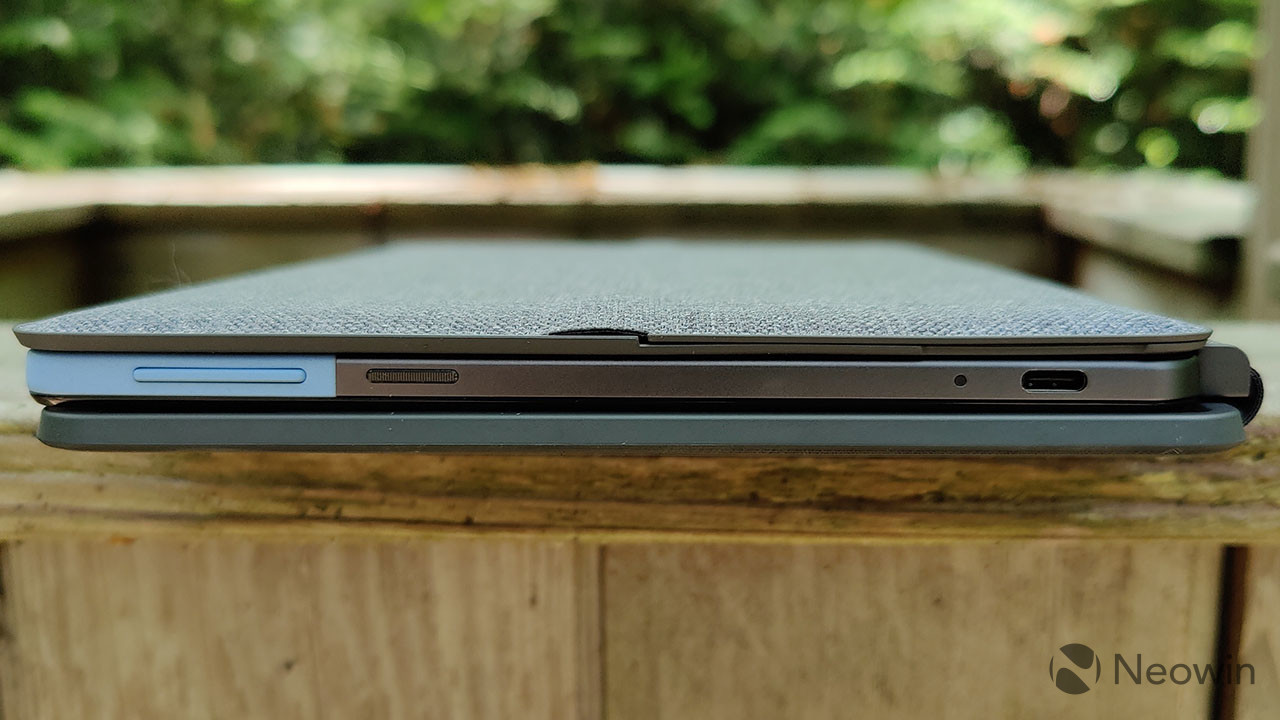 On top, you'll find the two speakers. Finally, on the bottom, there's a connector for the keyboard. 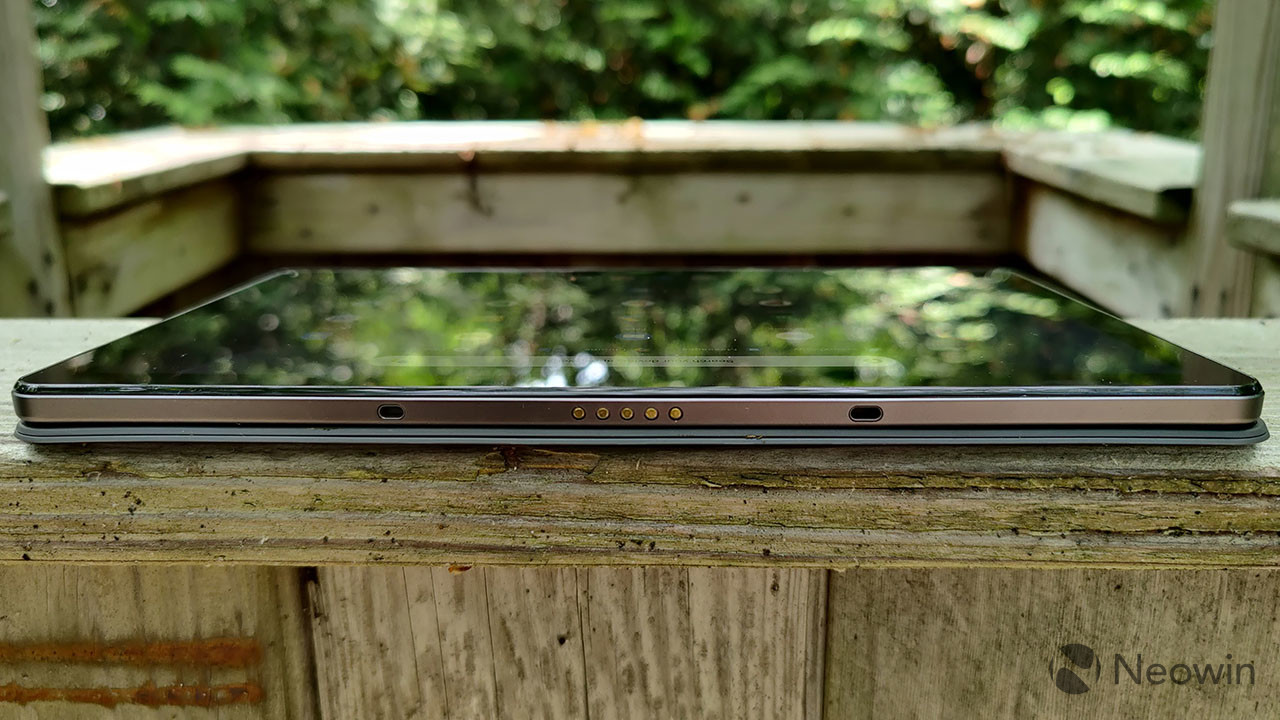 The other two pieces in the box are the keyboard and the kickstand. The keyboard snaps on like we've seen from plenty of tablets so far. The attachable kickstand is pretty unique though. It just snaps on magnetically, but the ability to remove it makes use as a tablet a lot more comfortable than with other tablets I've used, or at least with ones that have a kickstand built in. 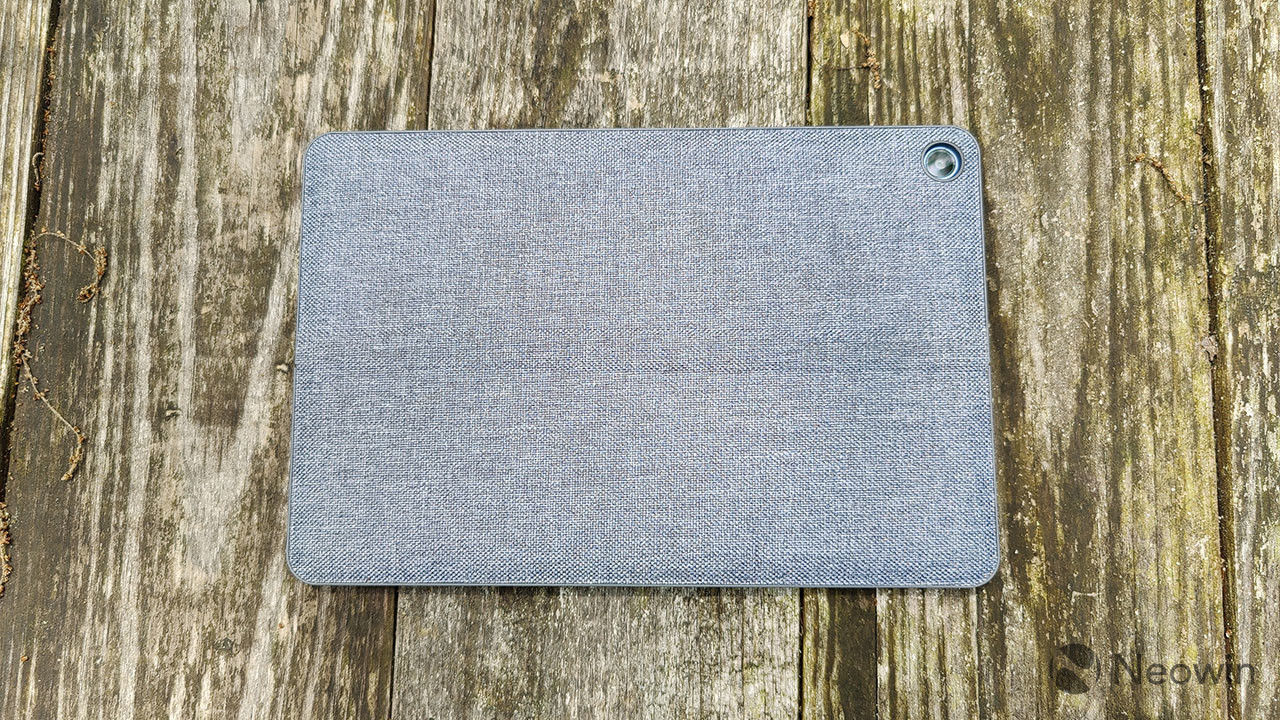 The back of the kickstand is a gray fabric. It's the one thing that I don't like, as it gets in the way of that sexy two-tone design of the body. And frankly, most of the time, I think these two pieces are going to stay attached to the tablet. I'd only remove them specifically when I want to use it as a tablet.

The Chromebook Duet has a 10.1-inch FHD+ display, which actually looks quite nice. Like I said earlier, the device really looks and feels premium. The colors on the screen are vibrant, and there's no visible distortion when viewing it from an angle. 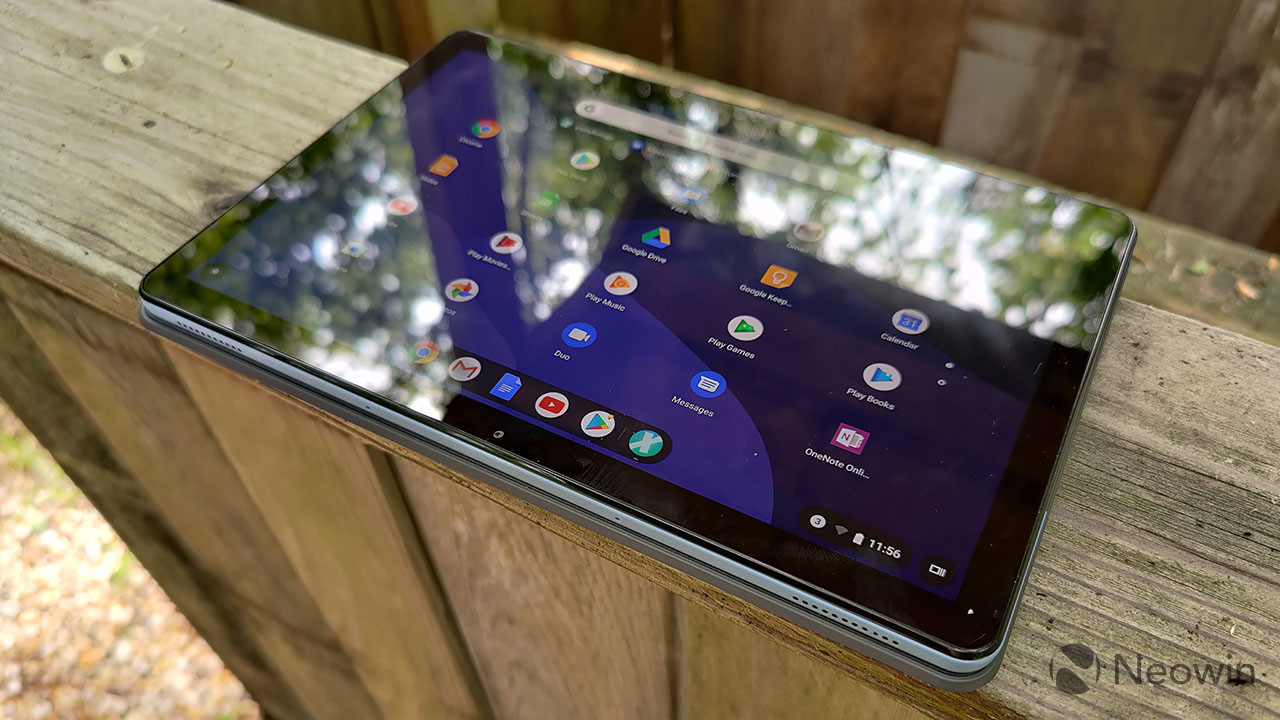 It also has pretty narrow bezels. It's not micro-edge or anything, but I had the Surface Go in mind when I thought of it. For a sub-$300 device, the screen really does feel modern. The 16:10 aspect ratio is a nice touch too. That means that it's a bit taller in landscape orientation compared to a traditional 16:9 display, and a bit wider in portrait orientation, such as when you're reading a book.

The speakers also caught me off-guard, because they're better than you'd expect from a 10.1-inch tablet. My anecdotal test is that if I turn the volume up all the way and it makes me uncomfortable, then the speakers are loud enough. You'd be surprised at how many laptops and tablets fail that test, but this one passed. Right now, I'm listening to music comfortably at about 75%.

I had a big complaint to make about the display but I saved it for this section, because it's the same complaint. This thing is small, really small. That means a smaller keyboard with smaller keys and less space between them. It takes some getting used to. The same goes for the screen; I had to turn off the bookmarks bar in Chrome just so I could see more of webpages.

To be clear, small doesn't mean bad. The keyboard itself is great, and the connectivity between the keyboard and the tablet is better than a lot of Microsoft Surface devices that I've used. It's comfortable to use, if only I had smaller fingers. It has a trackpad too, something that Apple only recently offered with its iPad Pro, and Apple's new Magic Keyboard costs more than the whole set with the Chromebook Duet. 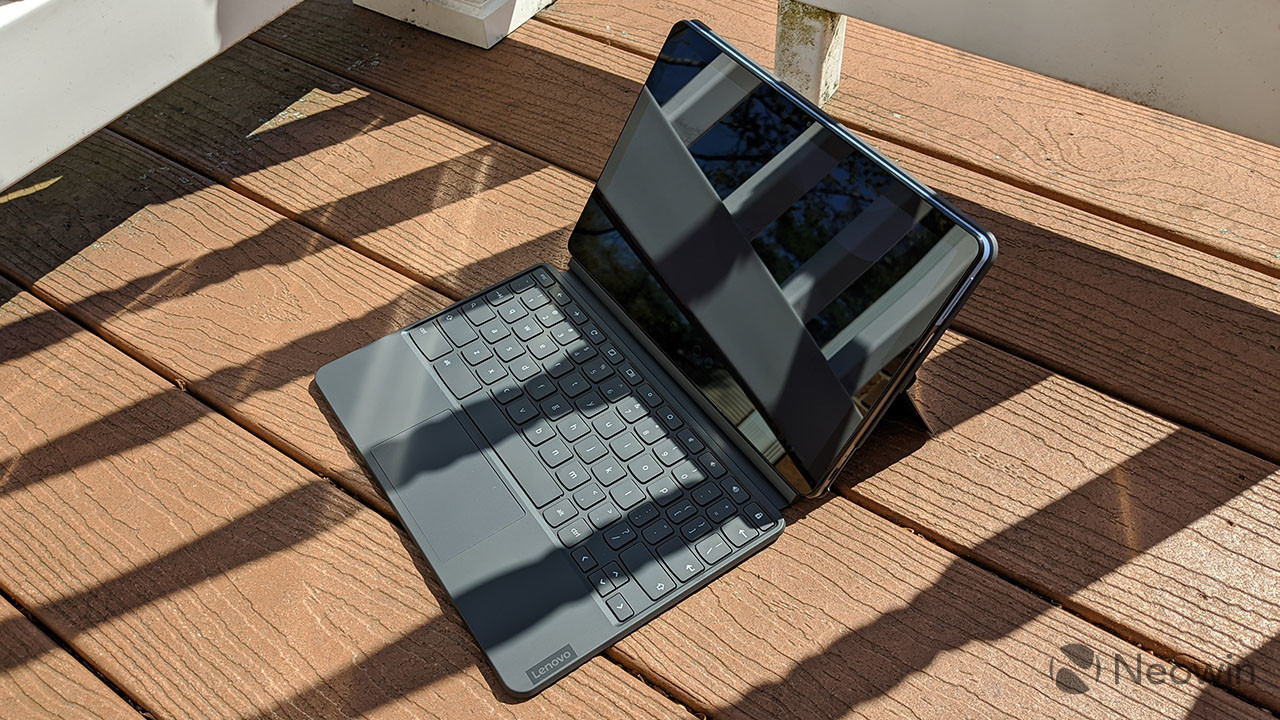 At this point, we have to be clear who this is for. Ask yourself if you're looking for a laptop with a removable keyboard, or a tablet with an attachable keyboard. If this is primarily a laptop, you might be better off with something that has a full-size keyboard. If it's primarily a tablet that you might want to type on once in a while, you're in good shape.

It's also great for kids, since they have smaller hands and Chromebooks are big in the educational market. If you're looking for something to buy for kids to do school work on, this could be it. It can be used as a tablet for reading textbooks, and it can be used as a laptop for typing reports.

The Lenovo Chromebook Duet comes with some new Chrome OS perks, although to be fair, they're features that are coming to the rest of Chrome OS. There's a new tablet mode, and it's pretty good. This is something that Microsoft has failed to achieve so far with Windows 8 and Windows 10.

Once you remove the keyboard, the app that's in focus goes full-screen. Then, you can control navigation using gestures. Moreover, they're the gestures that you already know, because they're mostly the same as on Android. You can swipe up to go back to the home screen, swipe up a bit to show the dock, and swipe up and hold to see your recent apps. 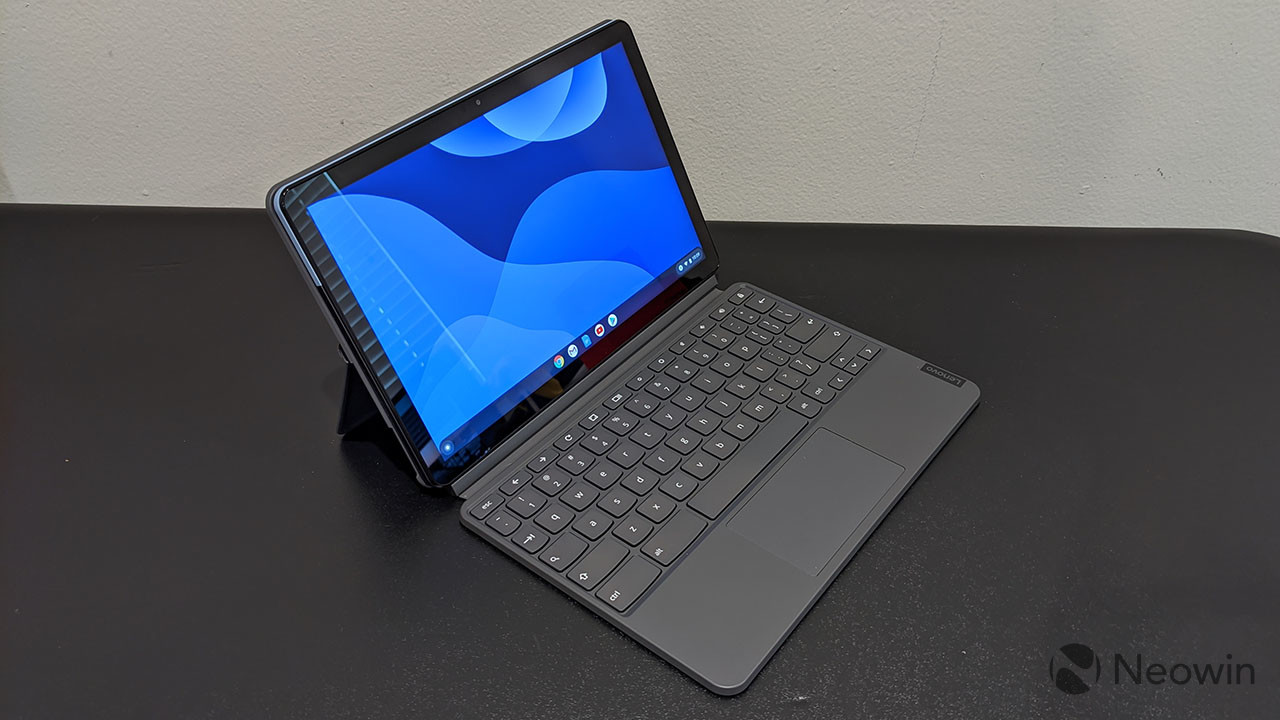 I want to reiterate Microsoft's failures on the development of a seamless transition between desktop and tablet modes. With Windows 8, navigation between full-screen apps and on Windows Phone 8 was completely different. Swiping down from the top of a Windows 8 app closed it, while it launched the notification center on Windows Phone 8.1. Honestly, most of the same applies to Windows 10's tablet mode, although Windows does have an annoying popup asking if you want to enter tablet mode, rather than just doing it like on Chrome OS.

And of course, Chrome OS has the full support of the Google Play Store and the apps that it offers. Android apps are a lot more touch-centric, and it comes with the tablet apps that you're looking for. These are things like Amazon Kindle, Comixology, Prime Video, Netflix, Hulu, Disney+, HBO Max, and more.

For productivity, I'm more of a fan of just using Chrome and web apps. You can get the OneNote Android app, but OneNote Online is what I'd prefer. The same goes for the entire Office suite.

As far as general performance goes, it's not great. This is one of those situations where you do get what you pay for. It does have a MediaTek Helio P60T, which has four Cortex-A73 and four Cortex-A53 cores. General work in Chrome with a few tabs open is fine, but as you start to use different Android apps and other things, you'll feel the performance issues.

It does boot up in under eight seconds as Lenovo promises, and battery life is great. Lenovo promises 10 hours, and it delivers. The company is also promising eight years of support from Chrome OS, which is a long life for a sub-$300 device.

There's a lot of good with the Lenovo Chromebook Duet, and when you consider the price, it's pretty much all good. This device looks and feels premium with its aluminum build, two-tone design, and excellent display. And I want to once again point out that the keyboard and kickstand both come in the box for that low price of $279, which is lower than the price of just Apple's Magic Keyboard.

The bad is that it's just small, and the performance is lacking in certain areas. This isn't going to be a productivity machine for any adult. Like I said earlier, it could be great for education, allowing students to use the tablet to read and the keyboard to type. Or it could be good for adults primarily using it as a tablet. 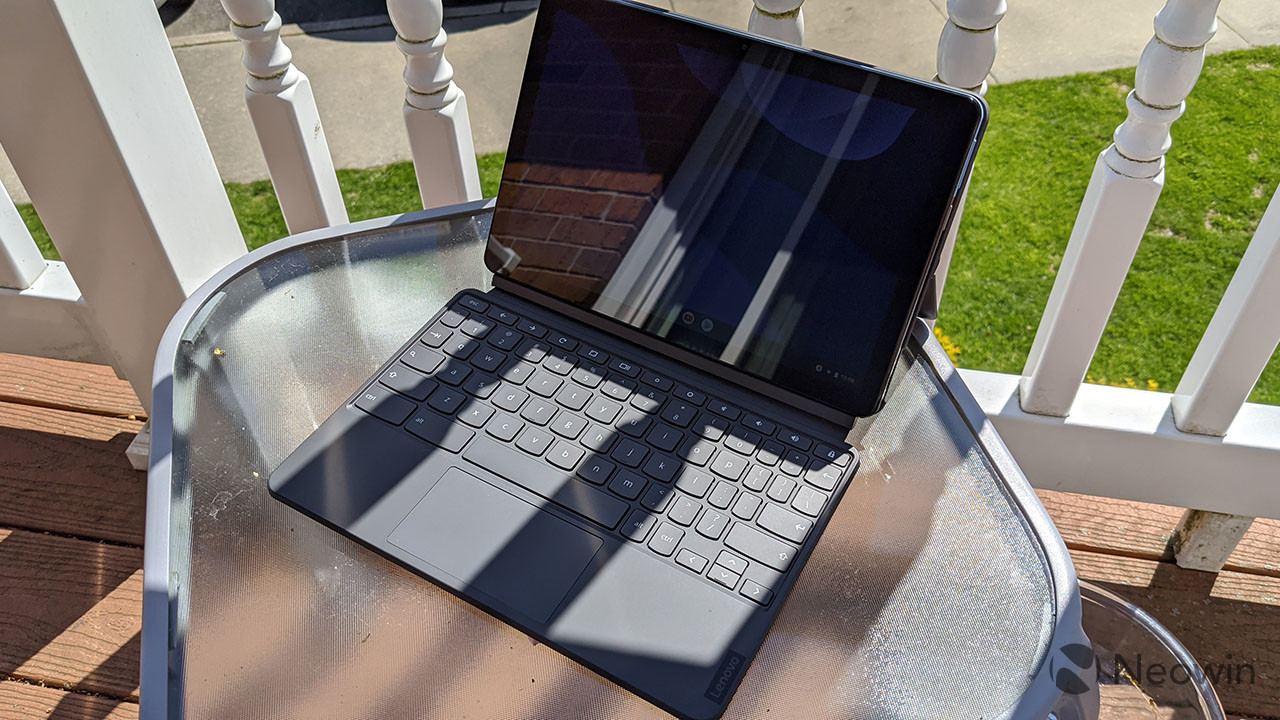 As an all-around device, the Chromebook Duet is pretty great, and it's amazing for the price of $279. With that alone, it's a solid Android tablet with a pretty display and loud audio. Add to that that it comes with a keyboard and a kickstand, and the Lenovo Chromebook Duet is a winner. 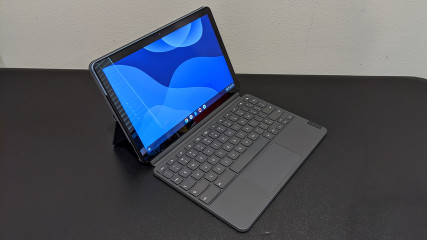 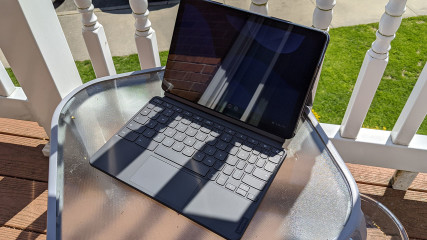 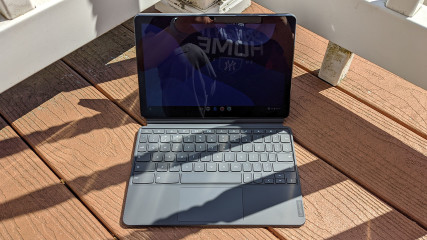 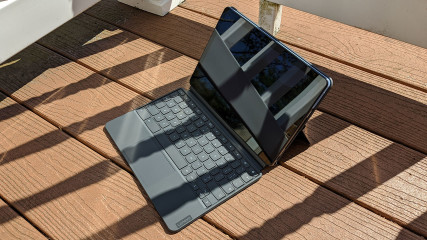 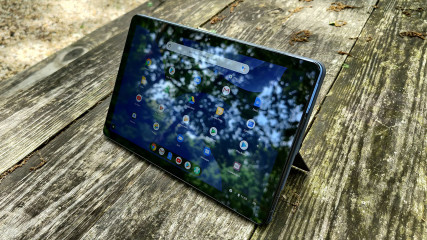 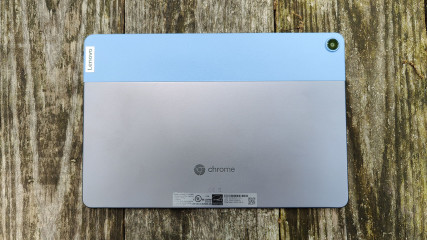 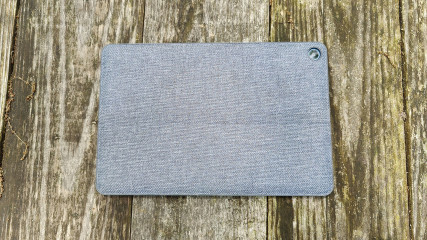 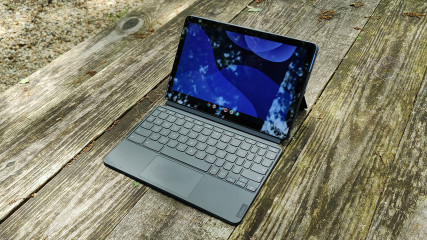 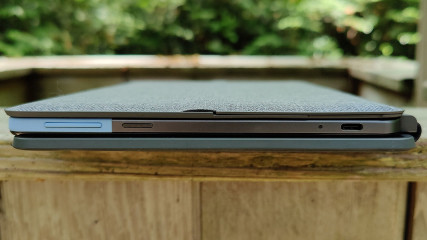 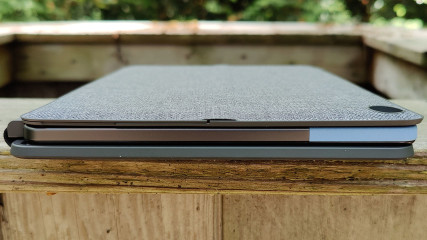 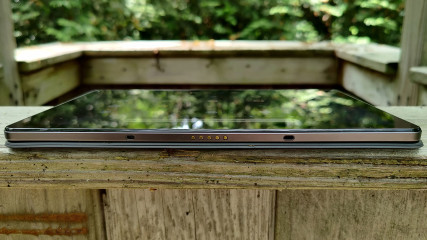 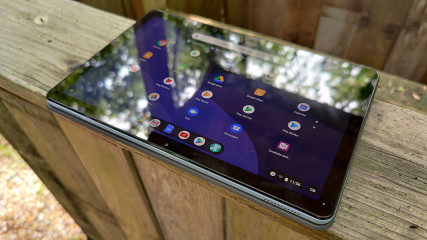