In a world where smartphones are starting to show up with more and more cameras, LG is leading the pack now with five. The penta-lens device has three cameras on the back and two on the front, and while this is the headlining feature, the V40 ThinQ is a great all-around device, with a beautiful OLED display and a thin and light glass chassis.

First announced last month, it's definitely one of the best Android phones out there, and it feels like a big improvement over the LG G7 ThinQ.

I feel like in an age of devices getting more powerful, they're also becoming bigger and heavier. The LG V40 ThinQ is one of few devices that I'm seeing that stays thin, light, and comfortable to hold. I have to commend LG for this. 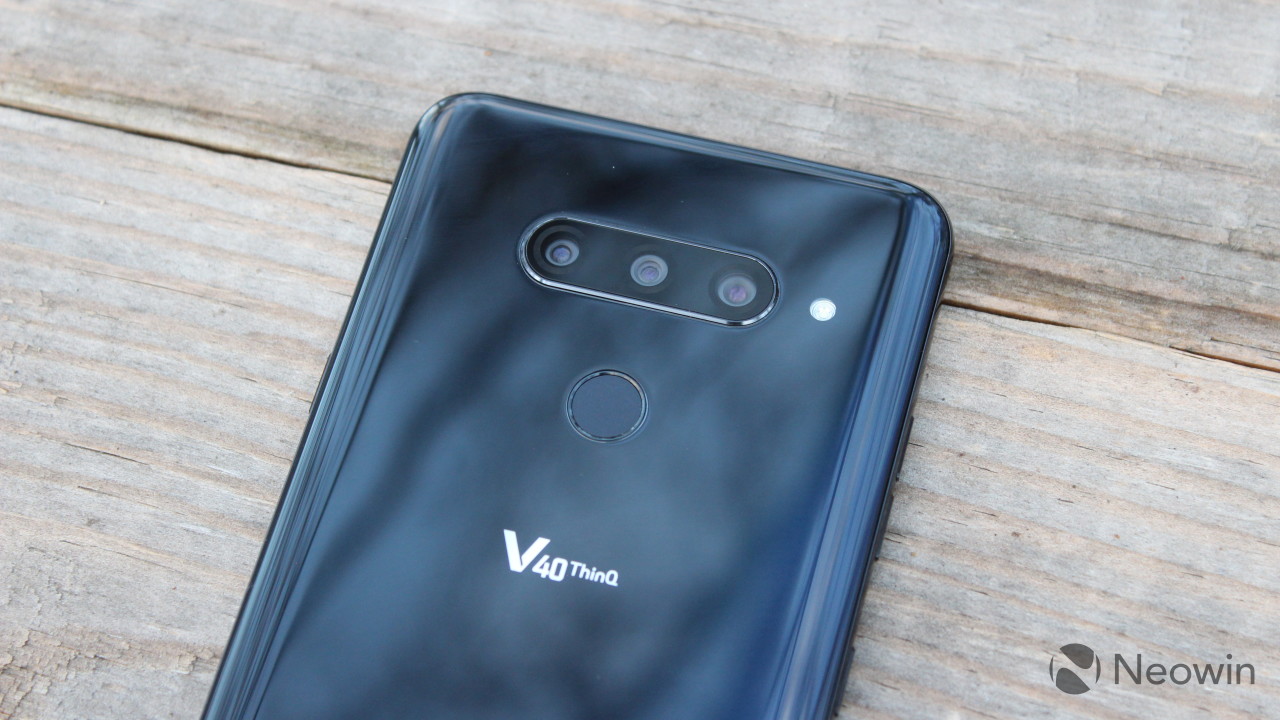 Like most phones coming out, the LG V40 ThinQ is a glass sandwich with a metal frame. Toward the top of the glass panel in the center, you'll find the rear triple camera module, with the lenses laid out horizontally. Below that is a fingerprint sensor, and frankly, it feels basic to have a fingerprint sensor there during a time with in-display fingerprint readers and depth sensors for facial recognition. But still, the tried and true method of a regular old fingerprint sensor still works, and it works great. 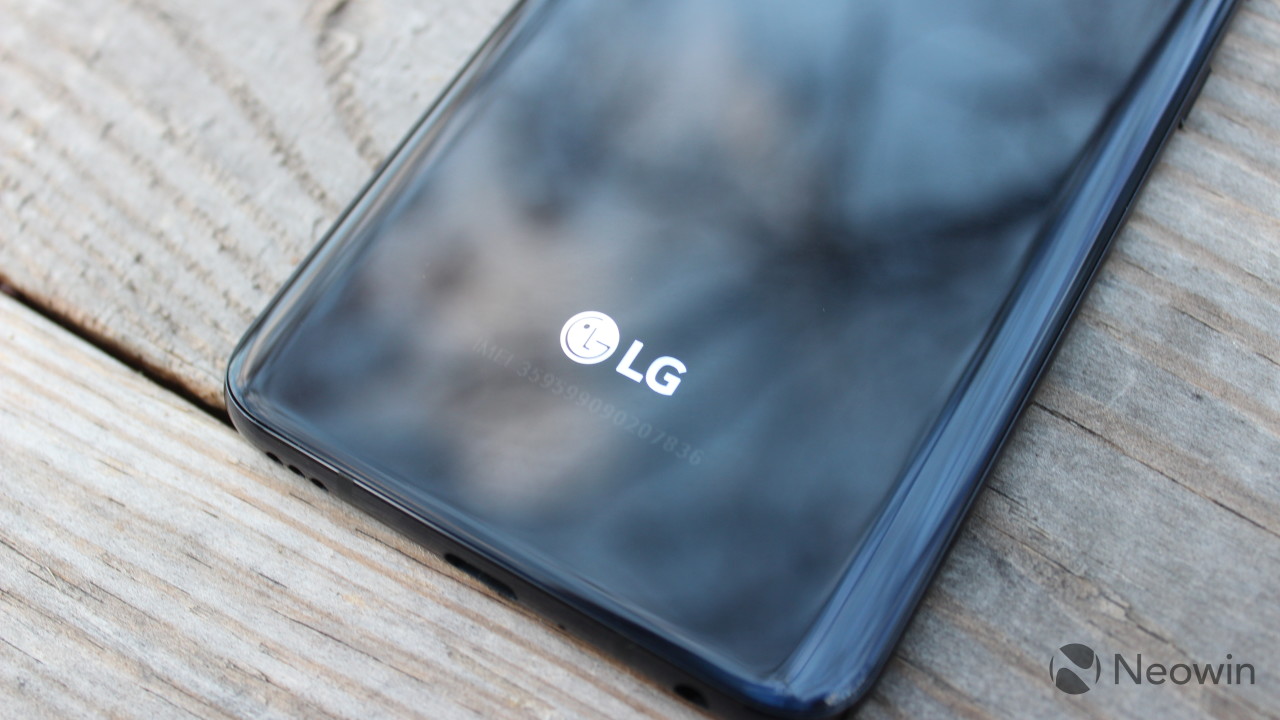 One thing that feels weird about it is that the IMEI number is actually printed on the device. Usually, there's a sticker that has the IMEI number, and you just peel it off when you take the phone out of the box. It's not that noticeable, as it's printed in small characters under the LG logo, but it's just a weird design choice. 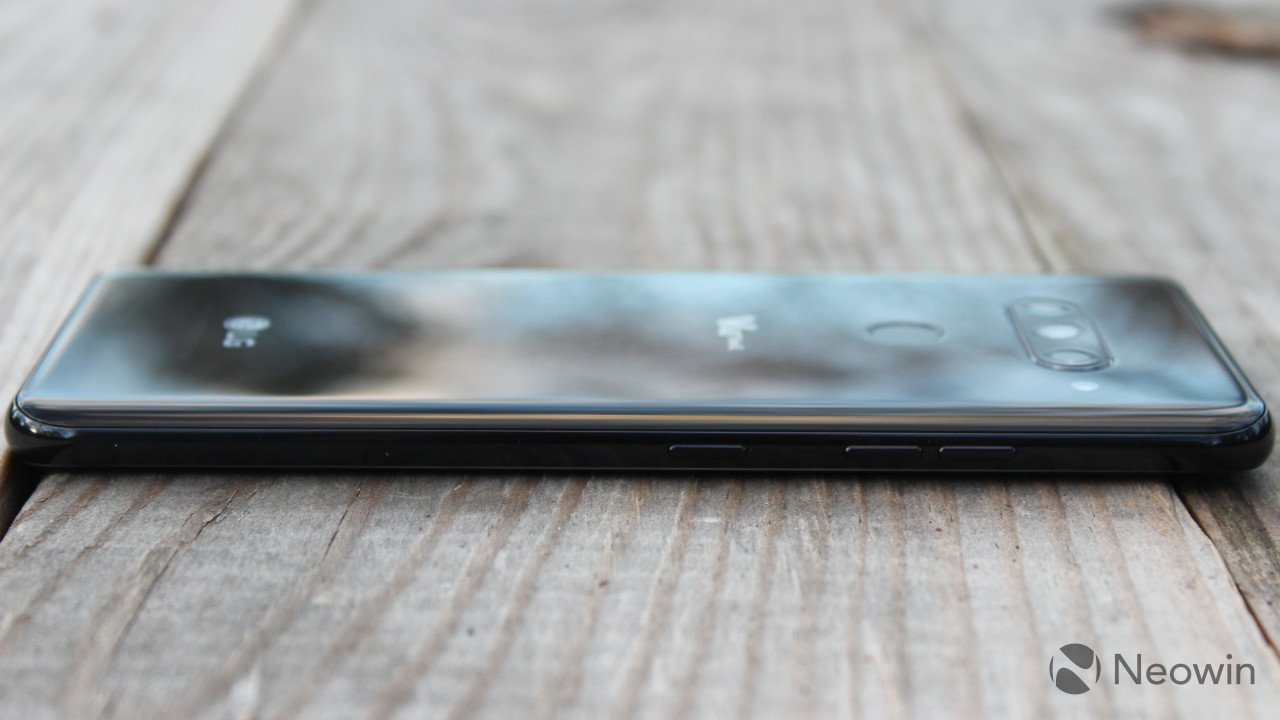 On the left side of the device, there's a volume rocker and below that, LG's Google Assistant button. Personally, I hate dedicated buttons for virtual assistants, because I almost never find virtual assistants useful enough to deserve real estate like that. I think voice recognition and far-field voice microphones are usually the way to go in that department, but here we are with a button, which I've almost never used in the course of this review. 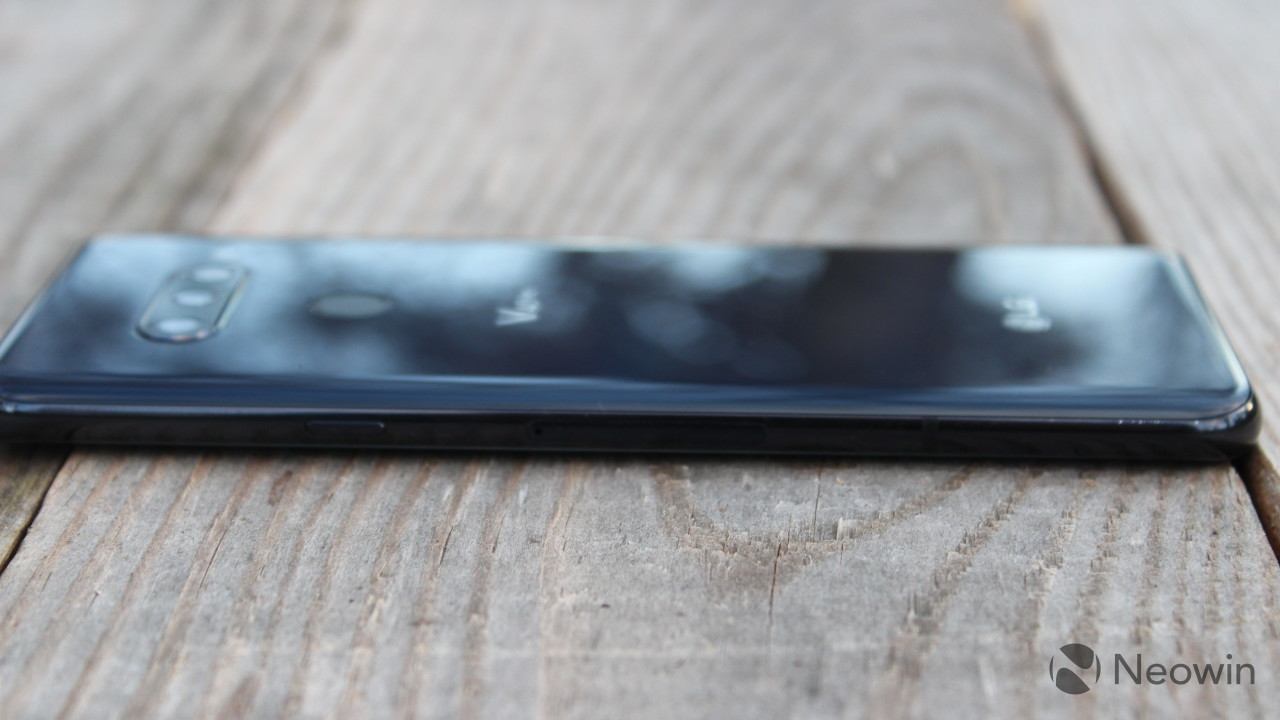 On the right side of the device, there's a power button and a combo slot for micro-SD and a nano-SIM card. And of course, on the bottom is where you'll find the USB Type-C port, speaker grill, and 3.5mm audio jack. We'll circle back to audio quality, which is awesome. 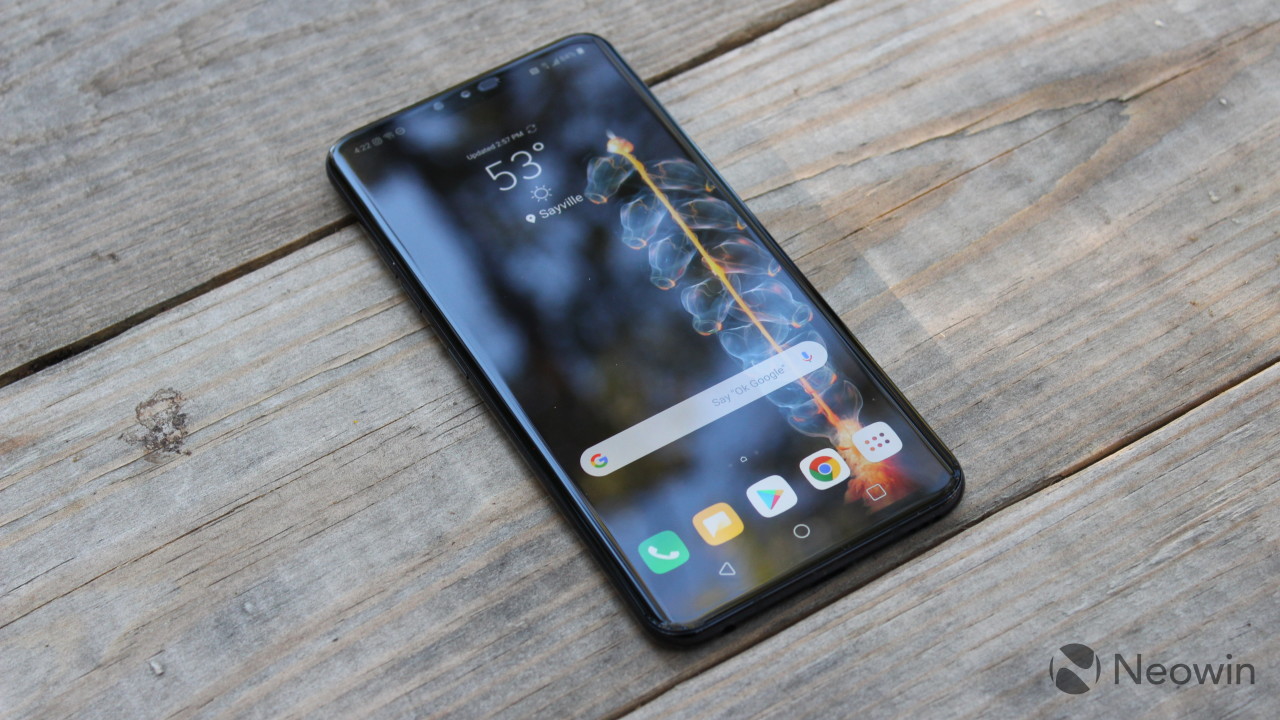 The display does have a notch, which is fairly unobtrusive compared to some other devices. But I do want to call out LG for something here, because the V-series was the first to have a notch. The LG V10 had a notch in the corner though, using the rest of the display as a "second screen". When the V30 came around, that notch was gone, and the same was the case for the V35 ThinQ, opting instead for a floating bar for the "second screen".

LG used a center notch in the G7 ThinQ, and it's the same case with the V40. I just don't understand why. A corner notch makes so much more sense to me, as you can do a lot more with the extra screen real estate when it's not split into two. I've asked LG about this, and I haven't yet received a response. 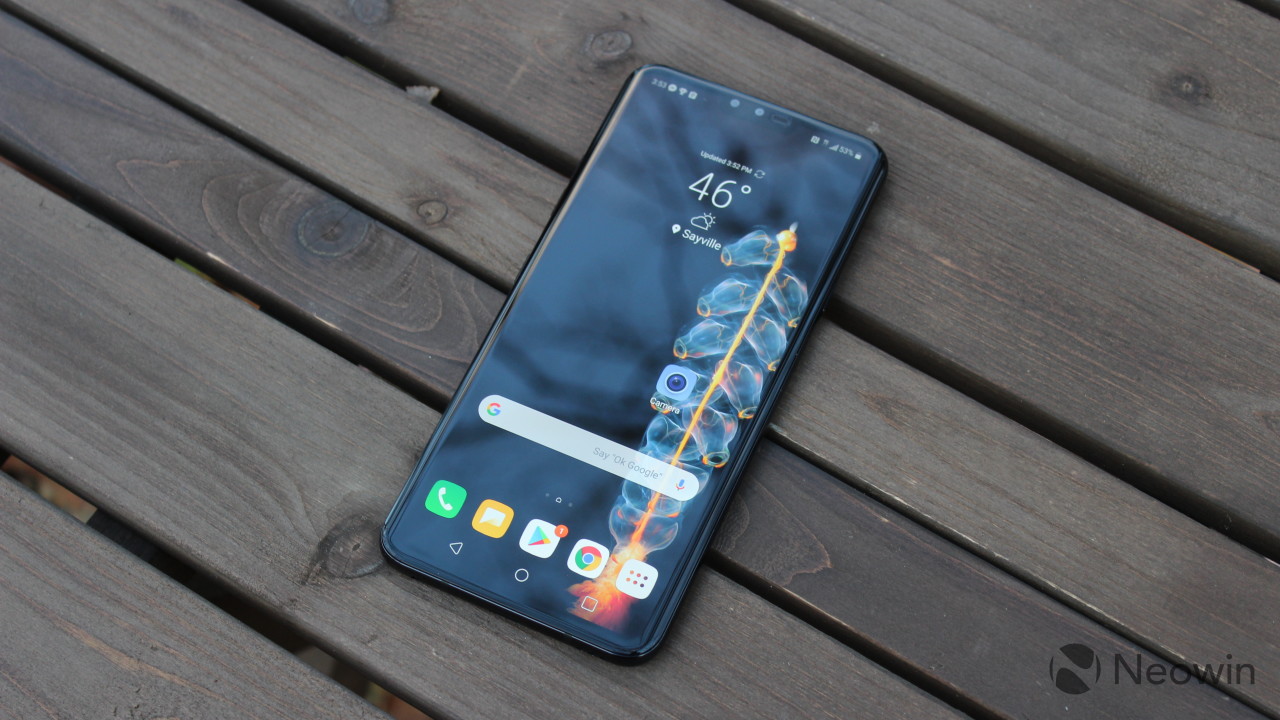 But back to the quality of the display itself, it's beautiful, with vibrant colors and true blacks. OLED displays allow for pixels to be turned off, rather than being entirely backlit like with an LCD. Rendering colors on top of that true black causes them to appear more vibrant, and it looks awesome.

It also supports HDR content, which adjusts the color profile of movies according to their metadata. That means that you can sit and watch Netflix with the best possible experience.

One thing that the V40 does not include is LG's Super Bright display, a feature found on the G7 ThinQ. Presumably, this is because the V40 ThinQ uses an OLED screen while the G7 has an LCD. Personally, I'd take the OLED display anytime.

The thing about media consumption is that a beautiful display is only part of the experience. Audio quality is necessary as well, and this is an area where LG excels.

The LG V40 ThinQ has what LG calls a Boombox Speaker, and that's exactly what it sounds like. This device can get loud, despite a relatively small speaker grill. Interestingly, it's still pretty loud if you're holding it in such a way that's covering the tiny speaker. 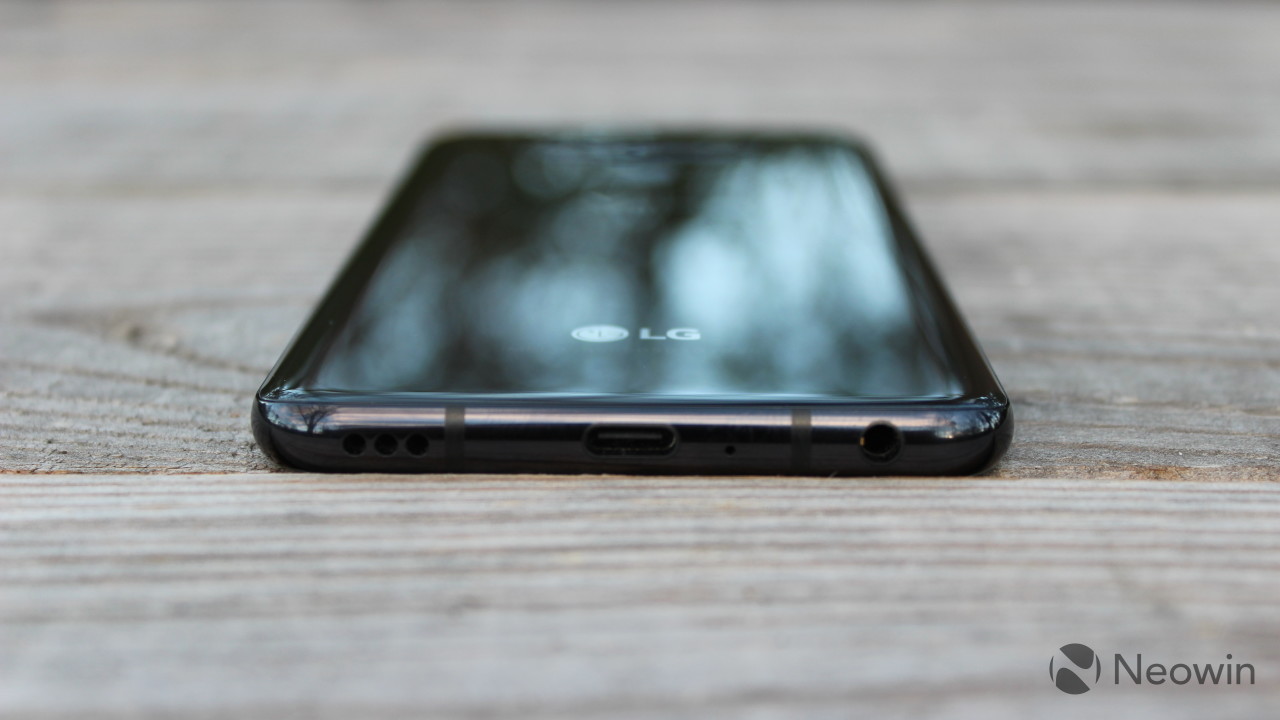 And of course, there's the 32-bit Hi-Fi Quad DAC. If listening through the speaker isn't your thing, you can get what's probably the best headphone experience possible through the 3.5mm audio jack. Yes, LG is still one of the few OEMs left that uses the 3.5mm port, and it isn't going anywhere. Rather than removing it, the firm has invested in making it even better.

To be clear, you don't need special headphones to get the benefits of LG's DAC (digital to analog converter). Any pair of headphones that you plug into the LG V40 ThinQ will sound better than they will in pretty much any other device. You can actually toggle the feature on and off on the V40, so you can easily hear the difference in clarity.

This is where we have always been heading. With the LG V10, the company had two front cameras, one of which had a wide-angle lens. With the V20, the dual front cameras were gone in favor of two lenses on the rear, once again with one of them being wide-angle. But then Apple did something different with the iPhone 7 Plus; it used its second lens for lossless 2x zoom. 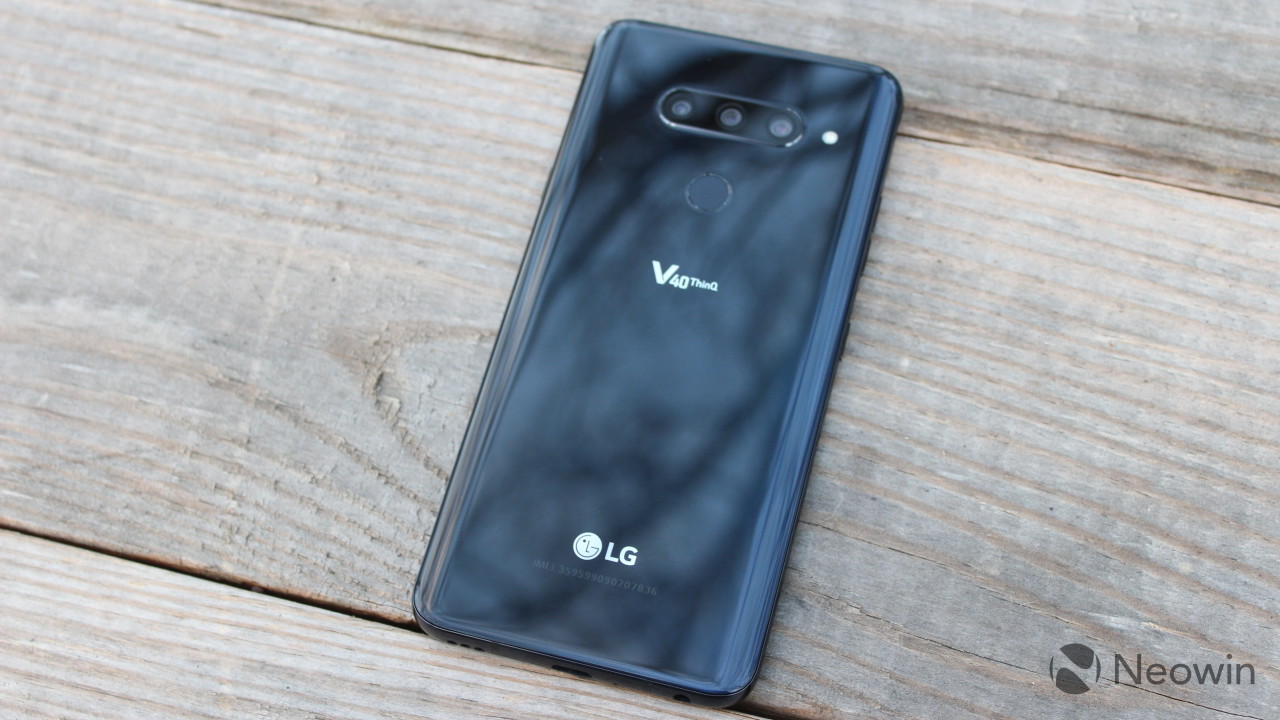 With a smartphone camera, the lens can only see so much, and the resolution is the amount of pixels in what it can see. In other words, you have a set field of view, and a 12MP camera means that that field of view is made up of 12 million pixels. Digital zoom is performed by degrading quality, so since the lens can only see so much, zooming in at 2x means that you only get a quarter of the quality. You'd actually get the same quality if you just took a picture, then zoomed and cropped it after the fact.

What we're getting now are separate lenses, all of which have different fields of view. With the same resolution being packed into a smaller field of view, you get lossless zoom. Unfortunately, this means a smaller sensor and smaller pixels, so low-light performance is affected. This can usually be remedied with longer shutter speed times.

Anyway, that's enough talking about it. Let's look at some actual samples:

My favorite feature is called Triple Shot. This allows you to take photos using all three lenses at once. They're not taken at exactly the same time, but you get all three with one tap. If you've ever been in a situation where you're not sure if you should take a photo with the standard lens or a secondary one, then you know the pain that this feature solves.

Another thing that's awesome is that the V40 supports 4K 60fps video capture. This was something that wasn't supported in last year's Snapdragon 835 SoC, and while the Snapdragon 845 does include it, LG didn't include the feature on the G7 ThinQ. I've been using it to record our recent YouTube videos, along with a gaming headset that's plugged into the 3.5mm headphone jack. Feel free to check out some of our videos to see the video quality and the quality of the 32-bit Hi-Fi Quad DAC.

Along with dual lenses, one of the key features of the front camera is portrait lighting, something that's becoming increasingly popular in different devices.

One more feature that I want to point out is Cine Shot. It allows you to capture motion in only a portion of an image.

The LG V40 ThinQ uses Qualcomm's Snapdragon 845 chipset, which is the same as you'll find in virtually every major Android flagship phone that was released this year, with a few exceptions. There really isn't much that needs to be said in terms of performance, especially given that it comes with 6GB RAM.

You're not going to run into any performance issues. It's fast, and it can handle any task that you throw at it. There aren't even any Android apps that are built for devices with better performance than this, because devices with higher-end processors are really rare.

That's all you need to know about performance, but of course, I ran some benchmarks as well using Geekbench 4, AnTuTu, and GFXBench. First up is Geekbench 4, which tests the CPU. 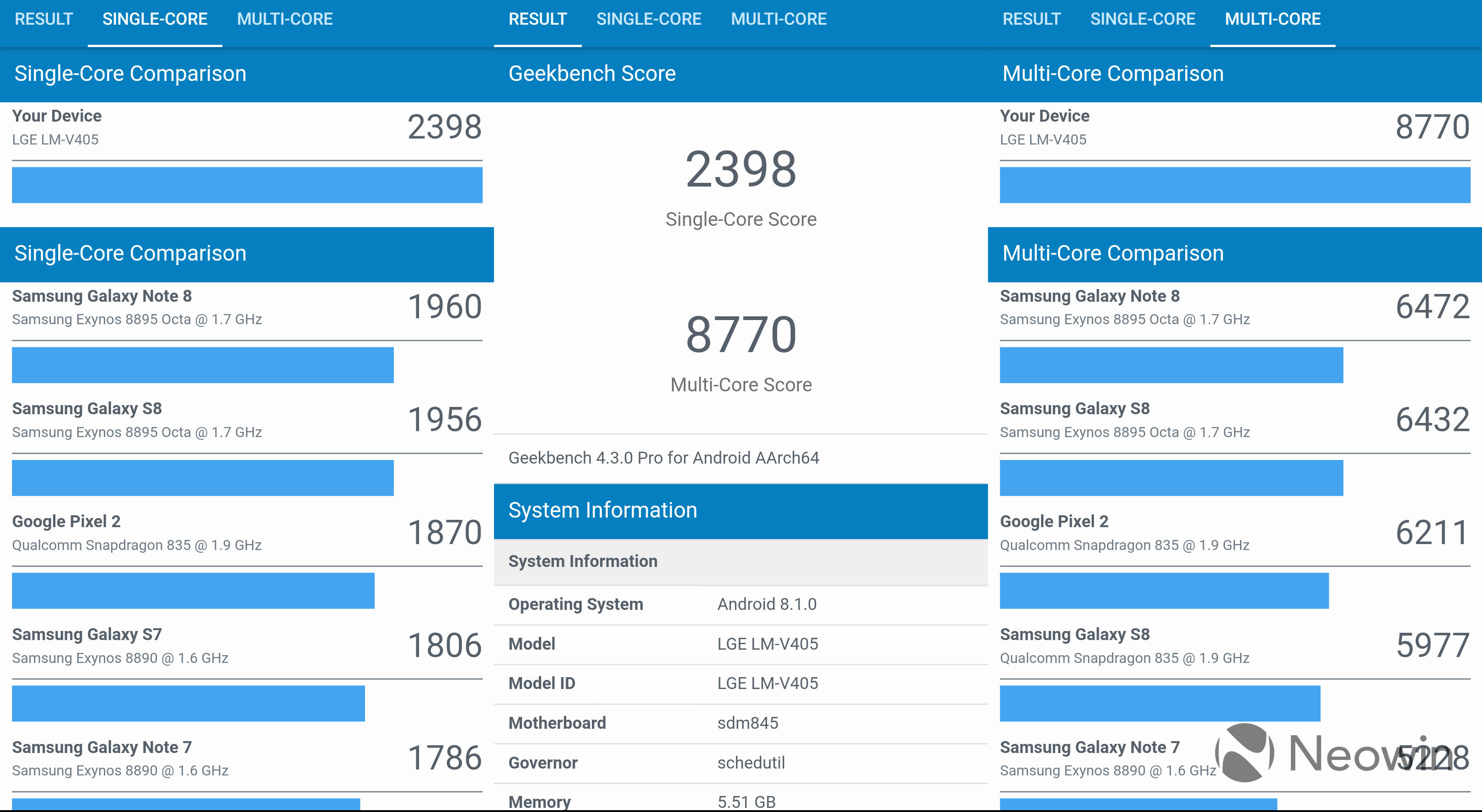 As you'd expect, the results are pretty standard. Since we're at the tail end of the year, we're now at a point when we've pretty much seen the same results over and over. Next up is AnTuTu, which tests a bit of everything. 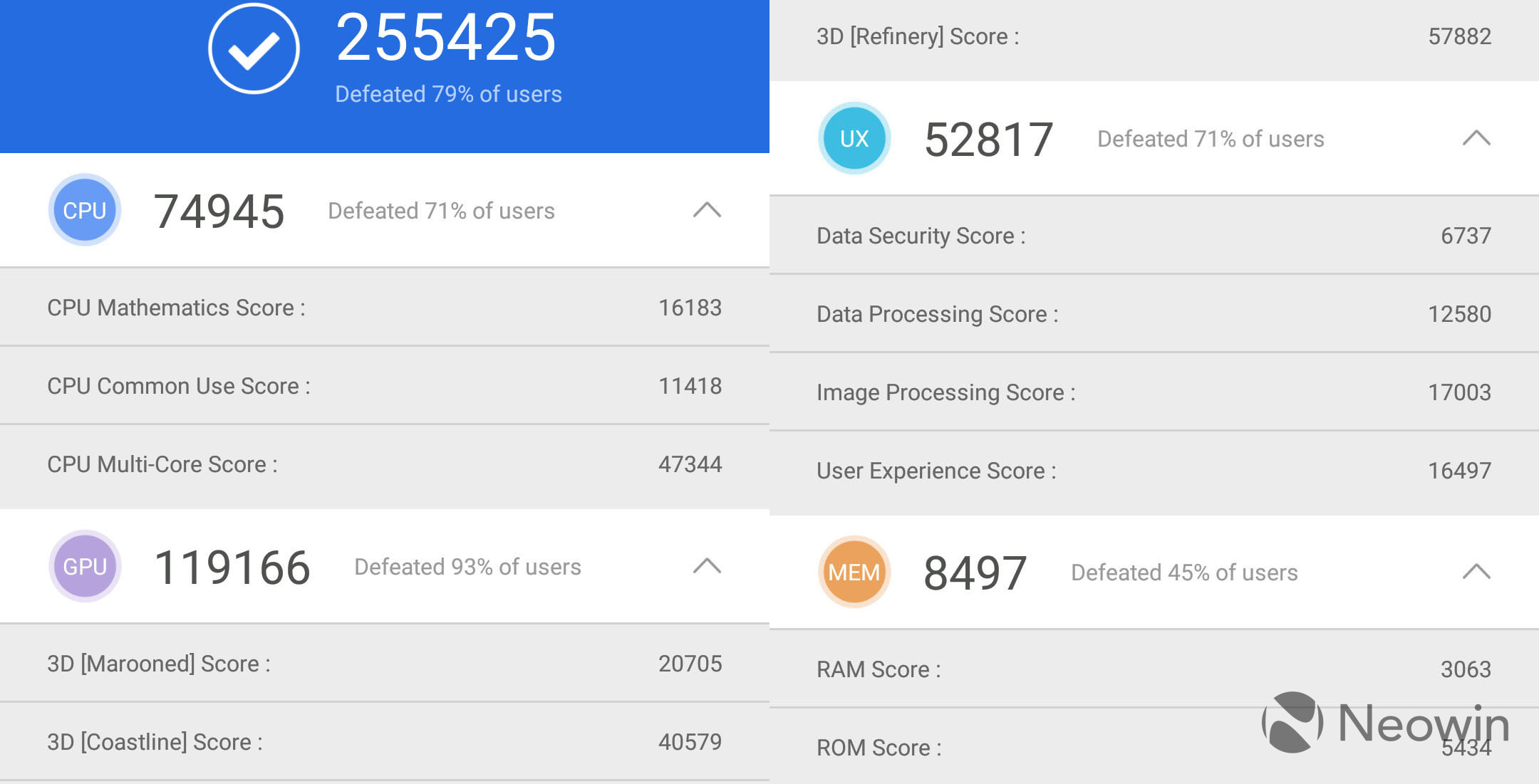 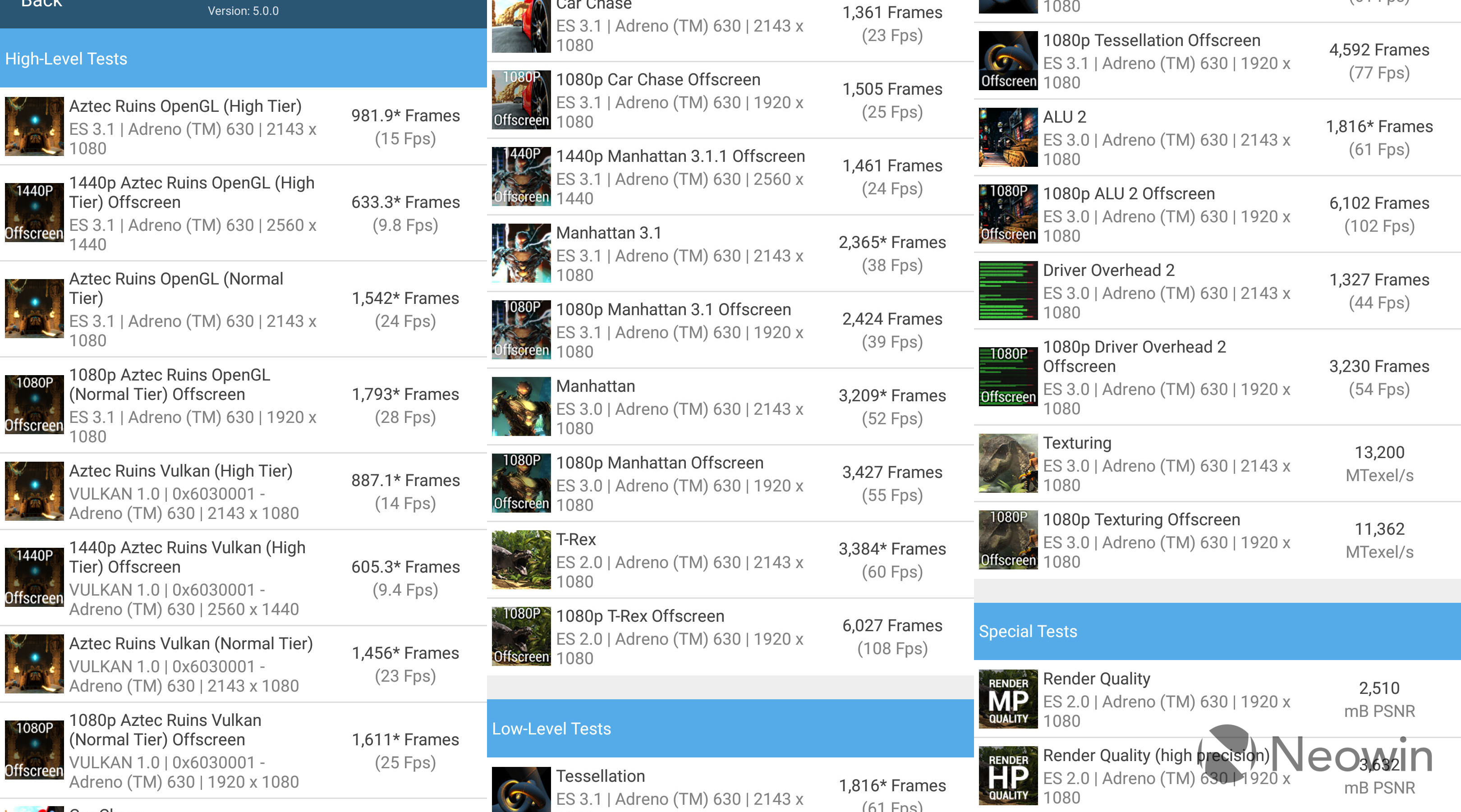 Once again, the performance is just fine. It's more of an issue on devices like the Google Pixel 3 that still include only 4GB RAM.

LG once again nailed it with its V-series. If you ask me, it's one of the most pleasant experiences on a smartphone today. It has a beautiful OLED display, one of the best audio experiences available in a smartphone, and that's all in a thin and light body that's comfortable to carry in your pocket. 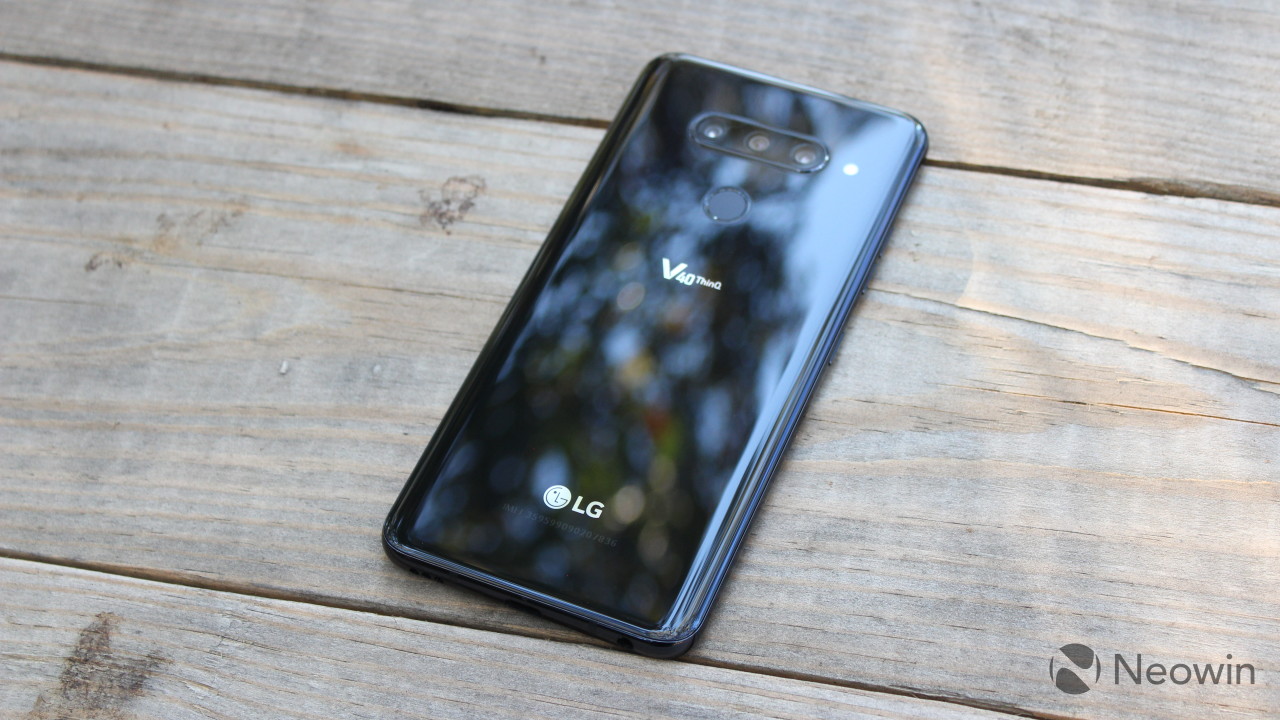 The new camera features are sensible instead of gimmicky. The triple-lens rear camera means no longer having to choose between optical zoom and wide-angle for a secondary sensor, and Triple Shot means not having to choose when taking the photo.

Of course, the big downside is the price. Like so many smartphones these days, the price is going up, and the V40 ThinQ will set you back $949.99. Companies like Apple and Samsung are charging even more than that for a new phone, although this still has to compete with companies like OnePlus, which is selling its new 6T for $549. Still, if you're going for premium and you're going to spend that much, the LG V40 ThinQ is a great choice. 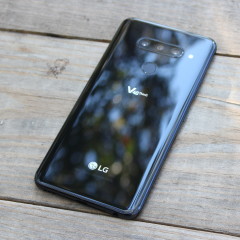 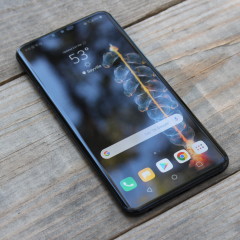 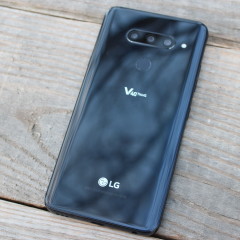 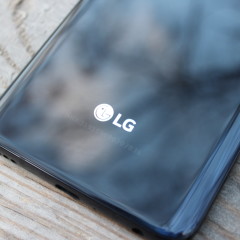 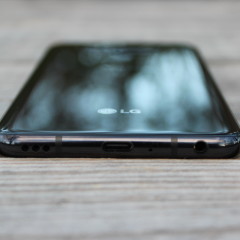 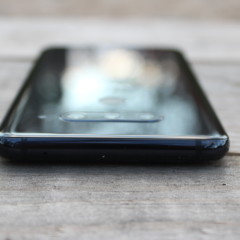 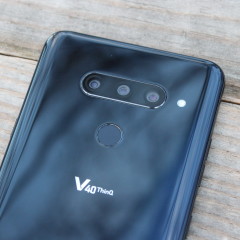 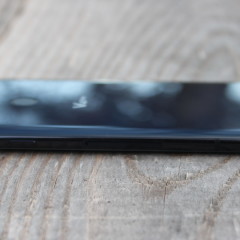 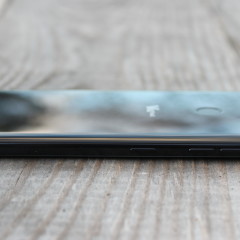 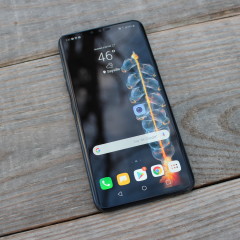 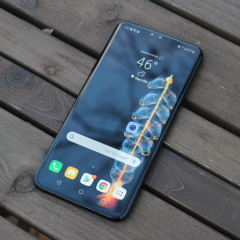 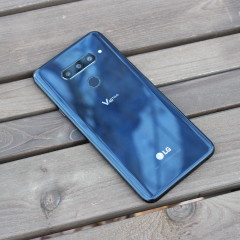