Ever since I was a kid and saw Star Wars for the first time, I’ve wanted to own a lightsaber. Who didn’t? There was one fundamental problem with my dream though, which is that lightsabers don’t exist.

Fortunately, with a little bit of help from augmented reality, those dreams can come true. Lenovo and Disney teamed up to make Star Wars: Jedi Challenges, and it’s everything that you’re imagining right now.

Inside of the box are three devices: the Lenovo Mirage augmented reality (AR) headset, a lightsaber, and a tracking beacon.

The tracking beacon serves to tell the device where the floor is. It's a spherical object that glows in pink or blue, depending on which mode you put it in. It's also the least interesting part of the kit. 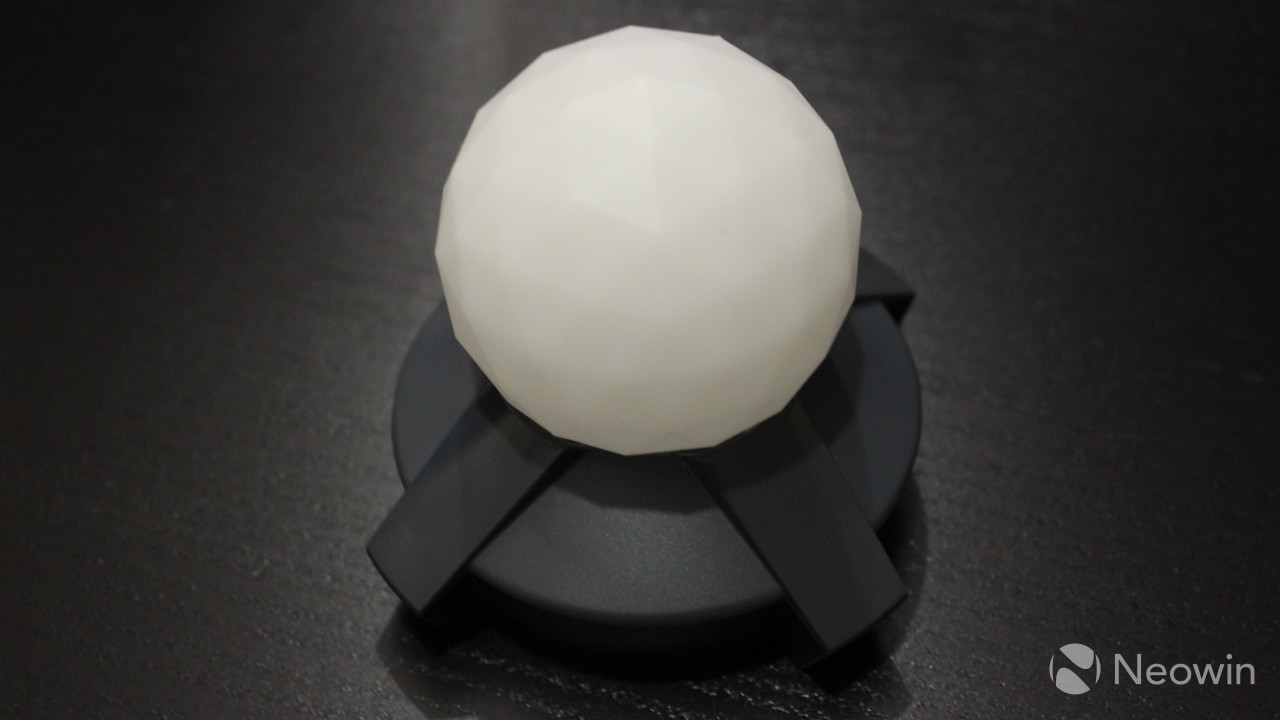 The lightsaber is modeled after the one that Rey uses, Luke Skywalker before her, and Anakin before him. As you can see from the video above, it's in a separate part of the packaging, as if you're being presented with your own Jedi weapon. 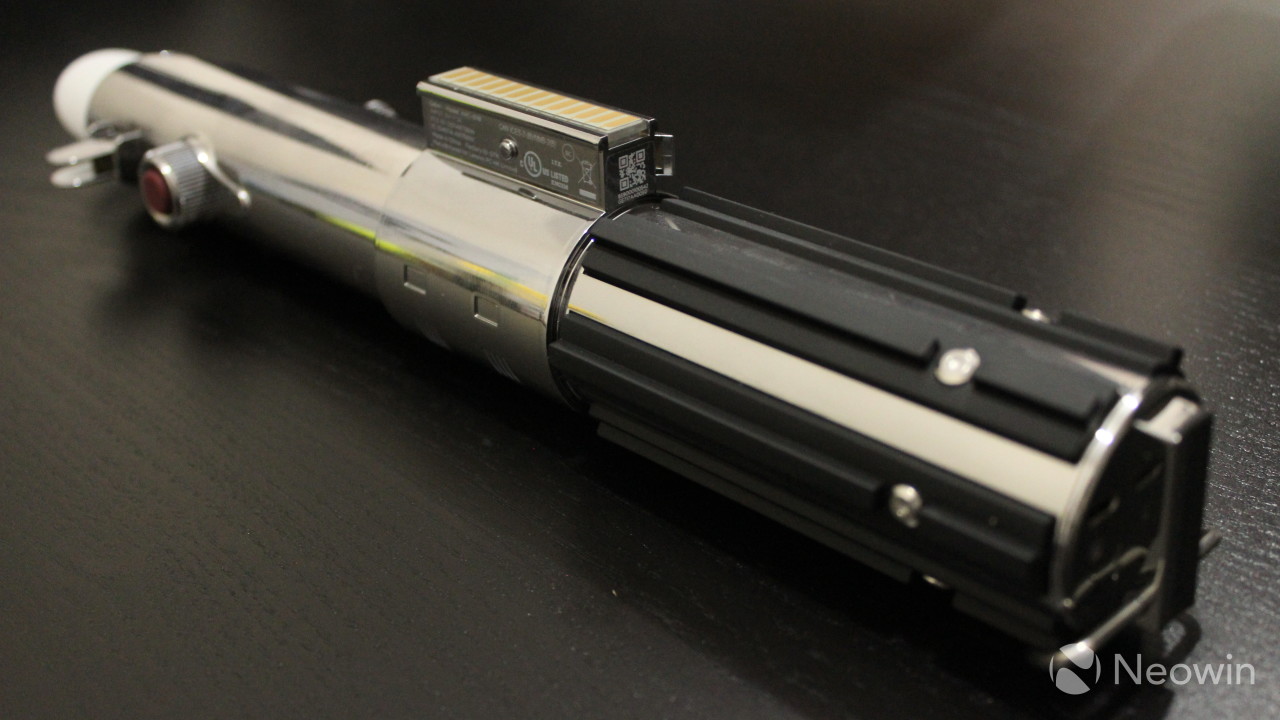 It weighs in at 0.61 pounds, which feels perfect to me. If it was too light, it wouldn't feel natural, and the same goes for if it was too heavy. There's a short piece that comes out of the top that lights up, which is extended in the augmented reality experience. 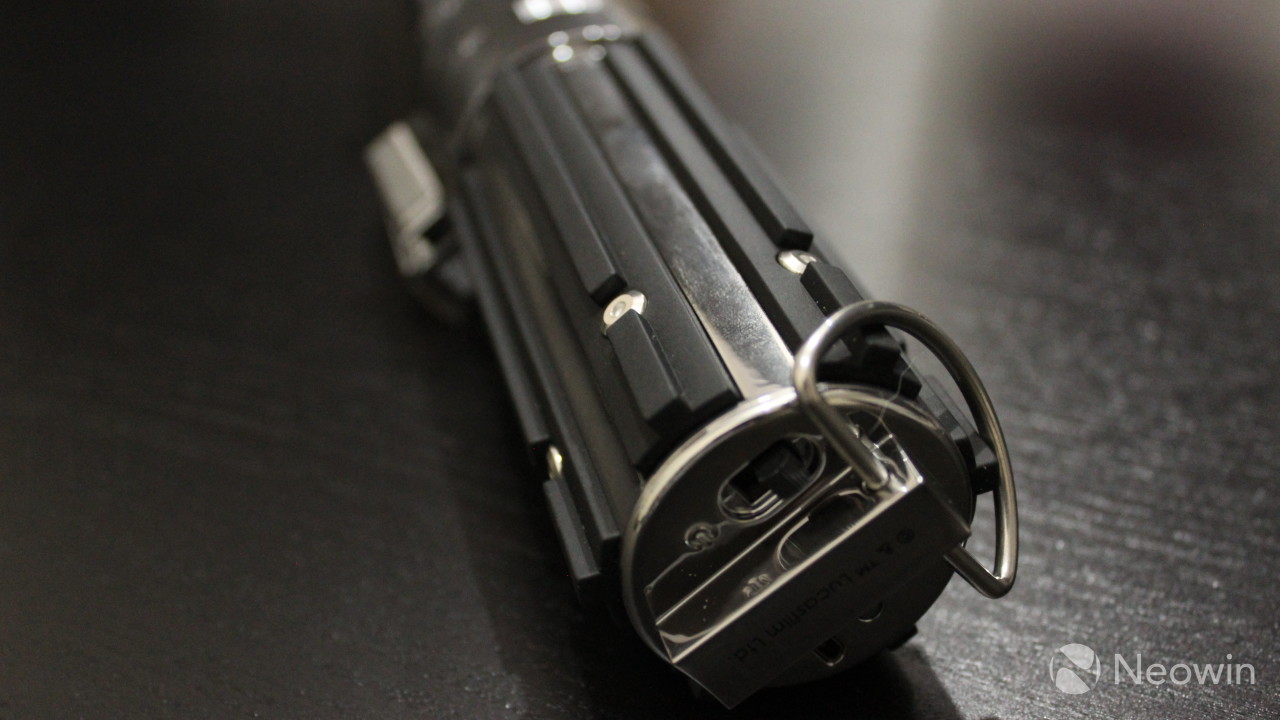 The 550mAh battery charges via micro-USB, as does the 2,200mAh battery in the Mirage headset. You'll also find a 'Blade Activation Matrix' button front and center, and a control button at the top. Underneath is the power toggle.

Finally, the Mirage headset itself weighs in at 1.05 pounds, but it feels too front-heavy to me. After a half hour or so of playing, it can get a little irritating, although you'll likely be caught up in the adrenaline rush of taking down Darth Vader like I was. 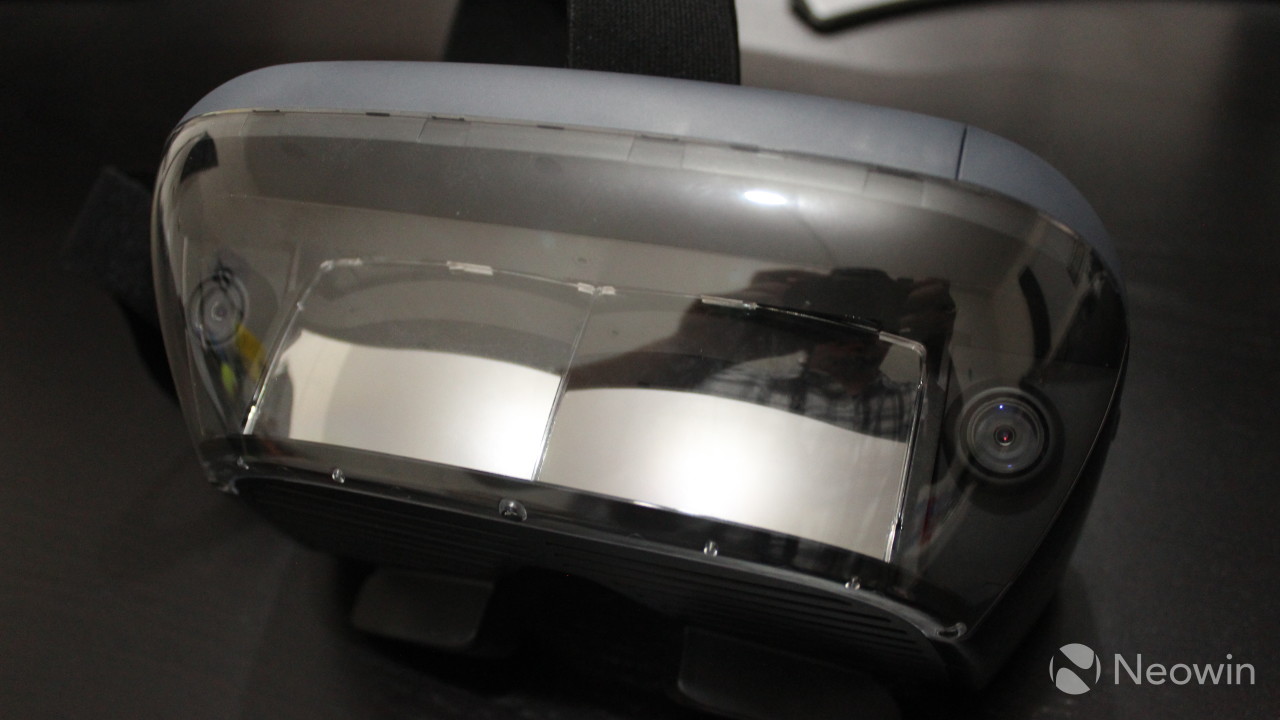 One thing I absolutely love about the design of the headset is that there are vents on the bottom of it. I can't tell you how many VR/AR headsets I've used with no ventilation in them, and then the lenses start to fog up.

The side of the Mirage opens up, and you'll find a micro-USB port and a tray for your phone. The device is smartphone-powered, so you'll need to put your phone in there and connect it via one of the three included adapters (micro-USB, USB Type-C, and Lightning).

I found the setup experience to be somewhat complicated. Luckily, once it's done, it's easy to get going again.

The first thing you'll need is the Star Wars: Jedi Challenges app, which you can find in the Play Store here and in the App Store here. Once you get the app, you can launch it and it will take you through the rest of the setup.

Before we go any further, I have to say that I'm a big fan of the phone/app-based model. This device is $199, and Lenovo told me that it would cost about $400 if it was self-contained. But the cool thing about it running off of an app is that you can let your friends play it too. They all have their own phones, and you don't have to worry about them screwing up your progress or showing them how to play since they'll get their own tutorial. 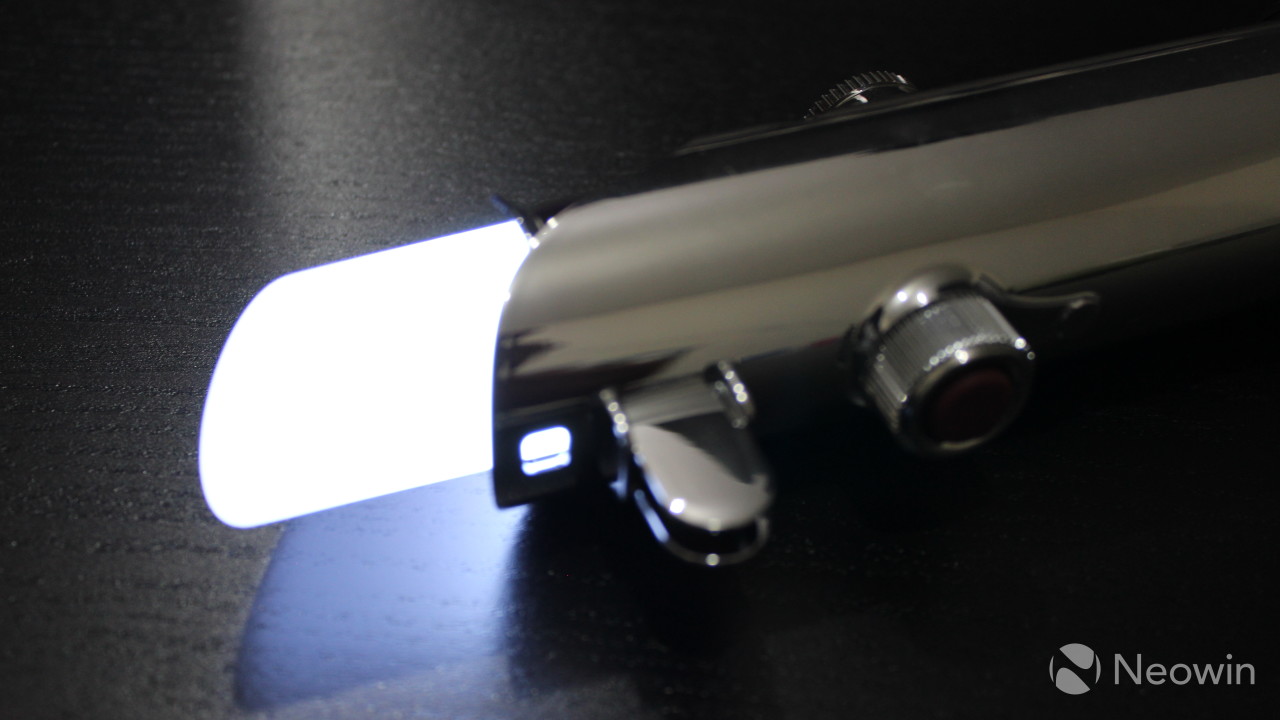 You'll first have to set up the lightsaber, which serves as your controller for all of the games. This is a pretty straightforward process of pairing through Bluetooth. It should connect automatically once you turn it on; the white light will turn blue. You'll then have to calibrate it by moving it in a figure-8 motion.

The beacon needs to be set to mode 1 (mode 1 is pink and 2 is blue), and then be placed on the floor, with about a 4x10 foot area to move around in. 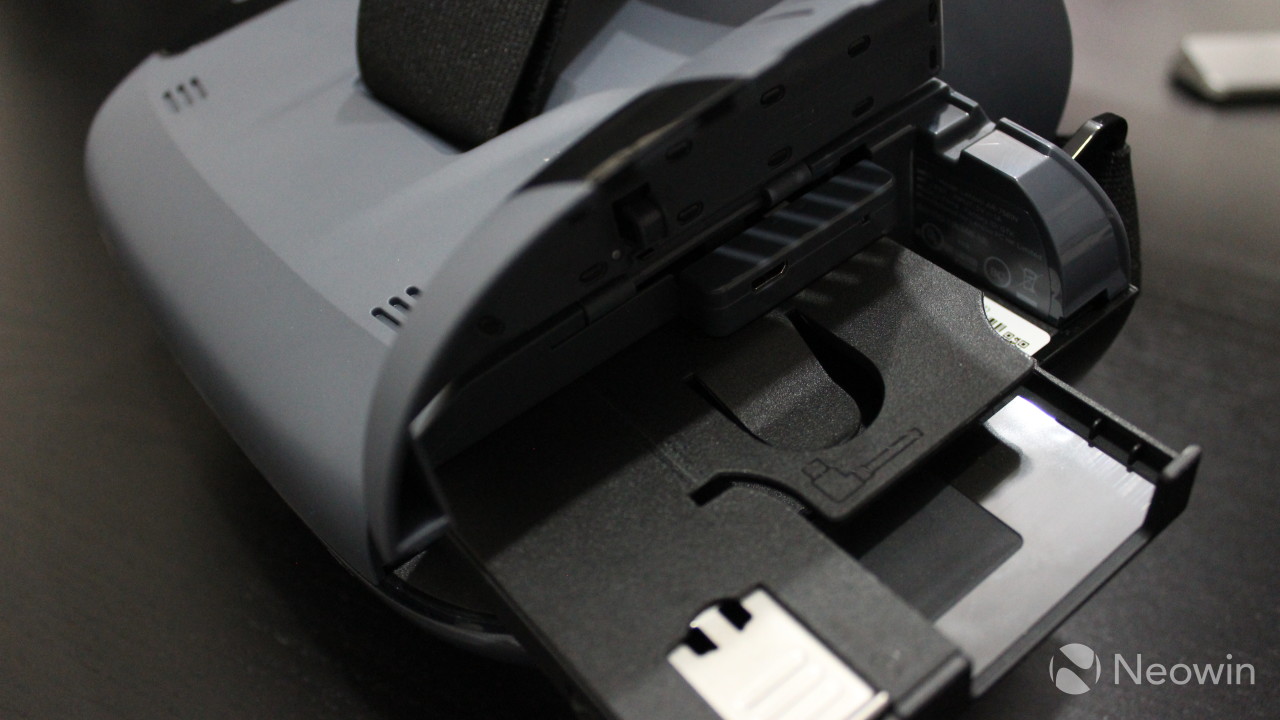 Next is where it gets a little complicated, although the app does a decent job of explaining it. You'll need to plug the micro-USB adapter into your phone. As mentioned earlier, there are three adapters that come with it: micro-USB, USB Type-C, and Lightning, so obviously you'll use whichever fits in your phone. The charging port of the phone should be on the left side, and the cable should be facing up.

After that, you need to remove the smartphone tray from the Mirage headset. Lift the flap on the side, and pull it out. This part made me a little nervous because it felt like I was going to break something, but I didn't. Once it's out, lift the flap on the tray (you'll once again feel like it's going to break), place the phone face-down, and close the cover. Adjust the sliders accordingly to make sure it fits snugly. 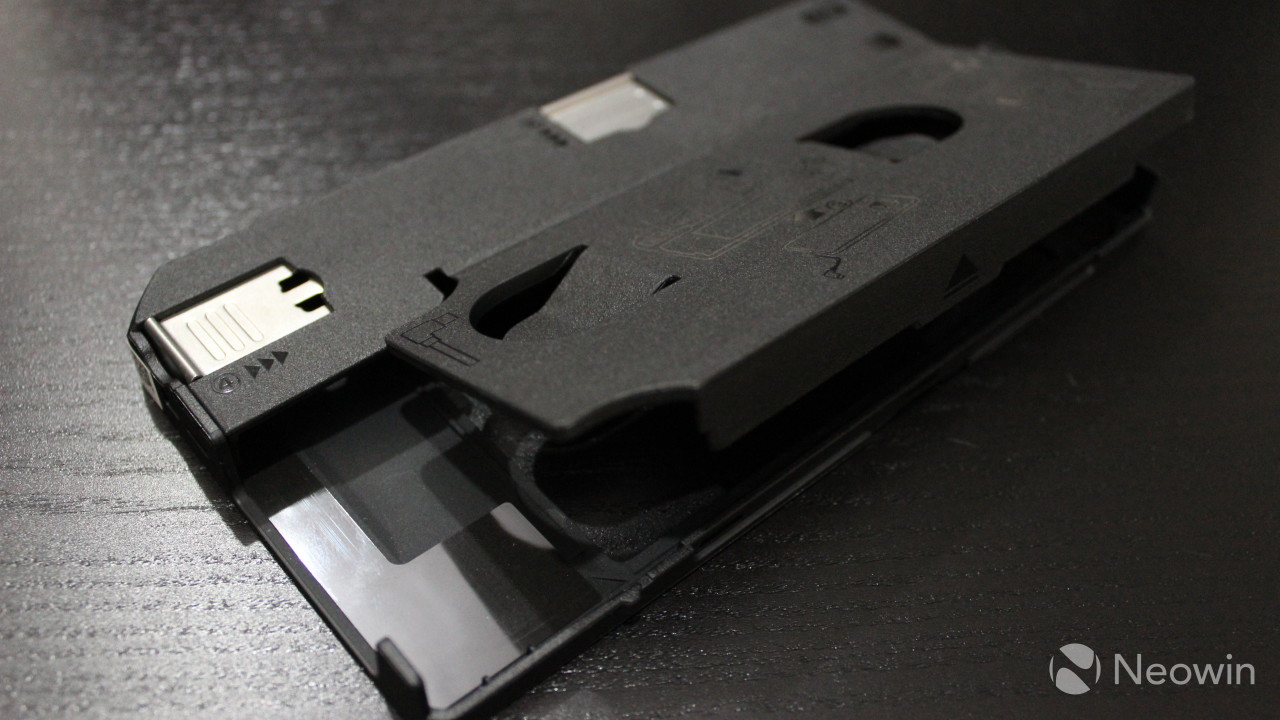 Finally, slide the tray back into the headset, and plug the micro-USB adapter into the port. The game should load into the tutorial right away.

Of course, once that whole bit is done, it's just a matter of plugging the phone in again to get started.

In the main screen of the experience, there are six planets that you can visit: Naboo, Garel, Lothal, Hoth, Takodana, and The Core. Each planet has a different set of challenges, and they get harder with each one.

You'll start out on Naboo, but an actual lightsaber fight isn't the first thing you get. With each planet, you'll have to fight off two levels of Storm Troopers before you even meet the boss. I've not yet found these to be hard, but it's super-fun to have these guys shooting at me and bouncing their bullets back at them with my lightsaber.

And then there's Darth Maul from Star Wars Episode I: The Phantom Menace, who is the boss on Naboo. This is still pretty much the tutorial phase of the game, so it's easy. Players will see yellow lines on the screen where they'll have to place their lightsaber to block, and then be told when Maul is vulnerable to an attack. 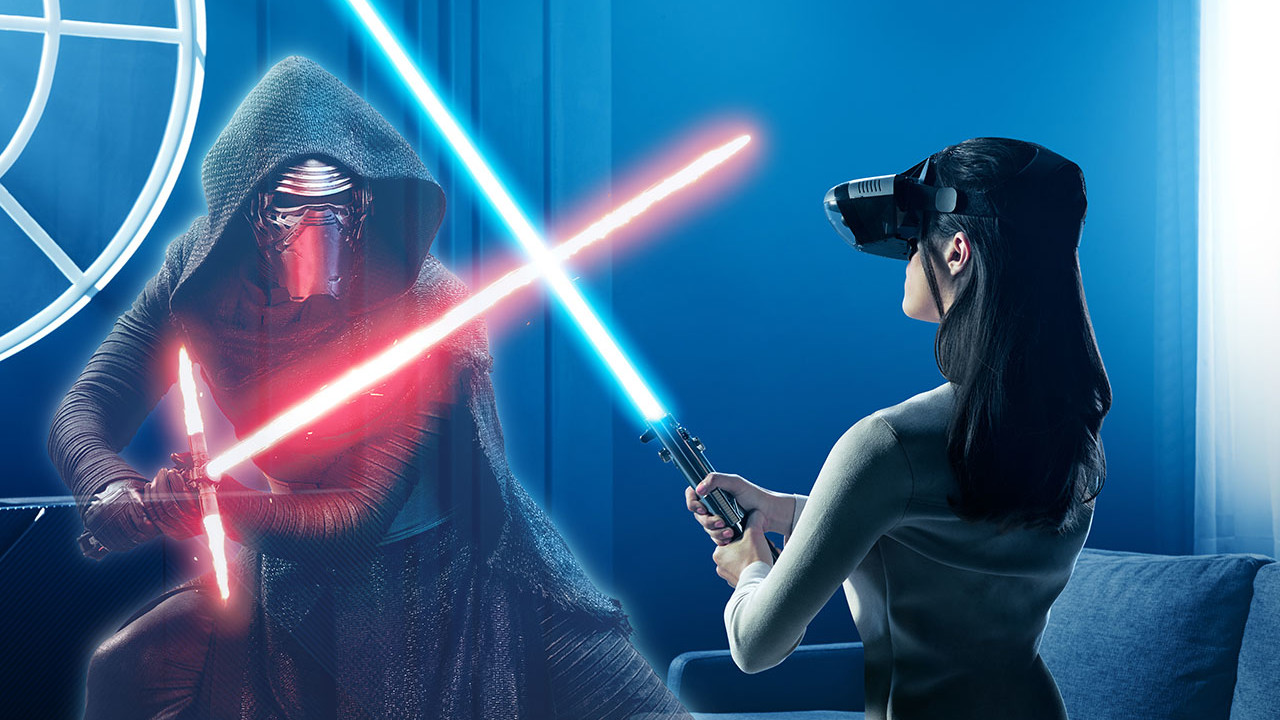 Note that I used images provided by Lenovo for gameplay, as I don't have a way of capturing this stuff. This image is a bit misleading. You can most certainly see where the controller ends and the AR portion of the lightsaber begins, and the field of view isn't that big.

Throughout the game, you also get new Force powers. For example, there's 'push', which when activated, will push any enemies in front of you and knock them down.

It gets so much harder. I'd love to tell you that I beat all of the bosses, but I only made it up to Darth Vader, who is on Hoth, or level four. I didn't even attempt going to Takodana where I'd find Kylo Ren, mainly because I could barely move my legs.

Darth Vader was the one that I kept losing against, and it probably took me a good 45 minutes of trying to beat him. By this point in the game though, you're not just blocking and swinging the lightsaber. There are also arrows that come up when you have to duck and dodge his attacks.

I was so consumed by the adrenaline rush of beating Darth Vader that when I finally defeated him, I realized just how exhausted my legs were.

I've had a lot of technical issues with the product though. The control button on the lightsaber exists for calibration purposes. If your lightsaber is pointed one way and your display says it's pointed another, you have to look down at it and press the control button. This happens more often than I'd like, and it can cause issues.

I told the story about my fight against Vader for a reason, because despite numerous technical issues, this game is just oh-so-much fun to play. It feels immersive, even though the field of view isn't great. It kept my mind busy to the point where I didn't know how much my legs were exhausted.

And on top of six different worlds with six different bosses, there are also three different levels for each one. Again, I'd love to tell you that I beat them all, but my legs are way too sore right now to even try.

If you've seen Star Wars Episode IV: A New Hope, then you've seen Holochess. The idea behind the game is that you get a certain amount of creatures on a board, and you send those creatures to attack those on the other side.

Different creatures have different strengths, and can move a different amount of places on the board to attack their opponent. Like regular Chess, it's a game of strategy, and it takes a little while to get used to. You don't want to move too close to your opponent, because they can attack you too. 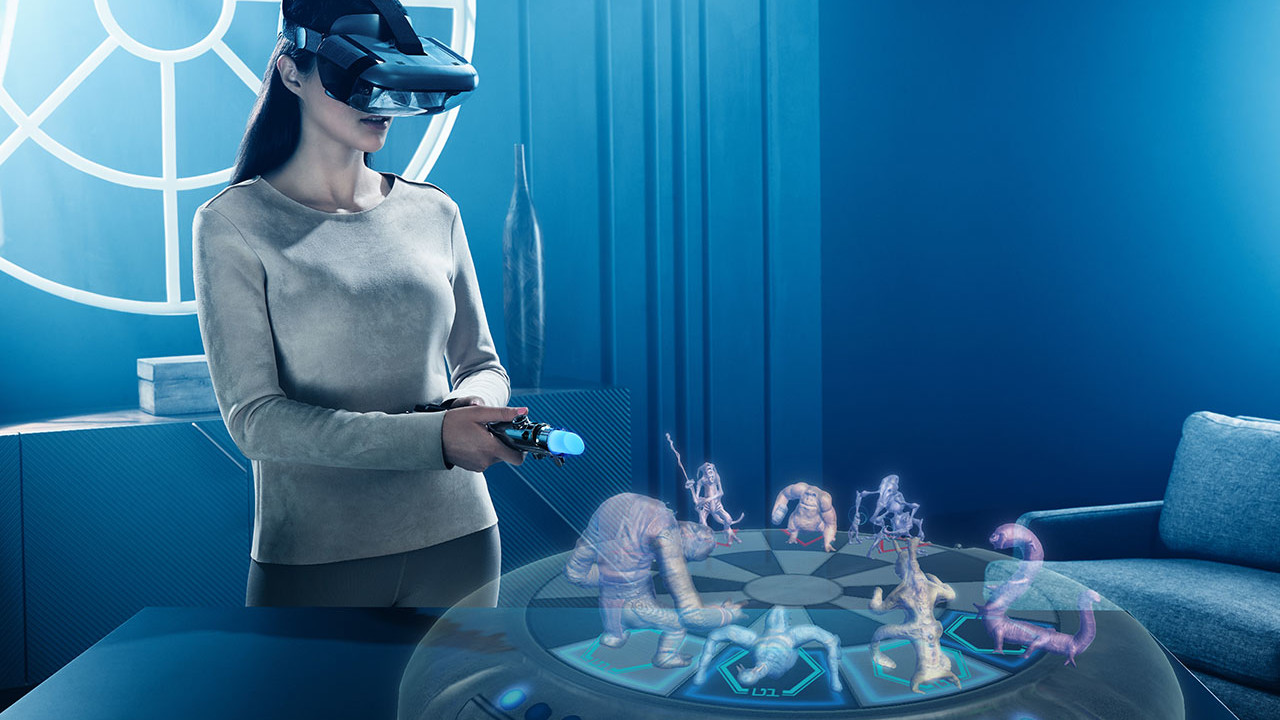 As with Lightsaber Battles (and all of the games, for that matter), there are three stages on each world, and each world is harder than the last.

Holochess is fun, in the same way that Chess is fun. It requires patience, and the willingness to try out different strategies. Of course, it's much more graphic than Chess, with various monsters beating the crap out of each other.

Strategic Combat is exactly what it sounds like. Think Halo Wars, but instead of fighting The Covenant, you're fighting The Empire and The First Order. There are three stages for each world, with increasing difficulty.

In the first world (Naboo), you're the Clone Troopers fighting the Droid Army of The Separatists. You can place various weapons and troops in different places to defeat the enemy, and those things move on their own. 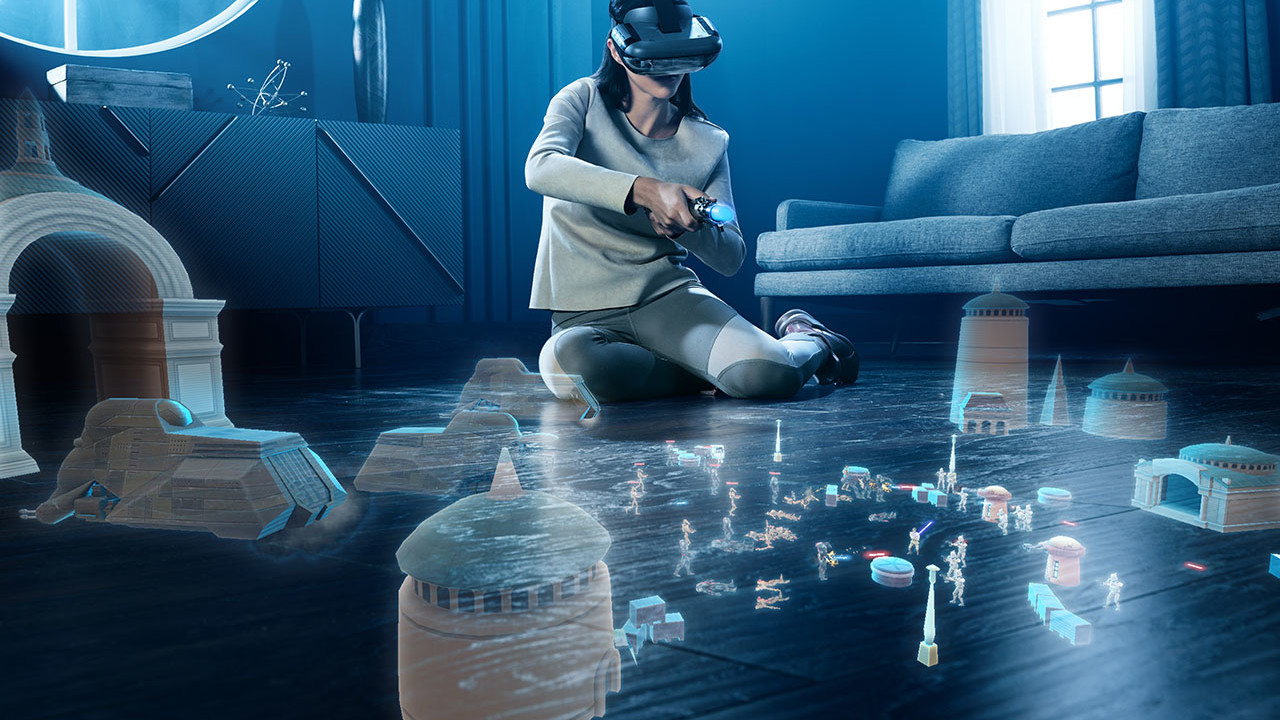 I'll be honest; these games have never been my cup of tea. I was way more into Lightsaber Battles and Holochess, but the cool thing is that there's something here for everyone. I know plenty of people that would love to play Strategic Combat.

Ever since I first heard about Star Wars Jedi Challenges, I've been really excited about it. I mean, seriously, I can now fight with a lightsaber. This seems to me like the type of game that augmented reality was made for. 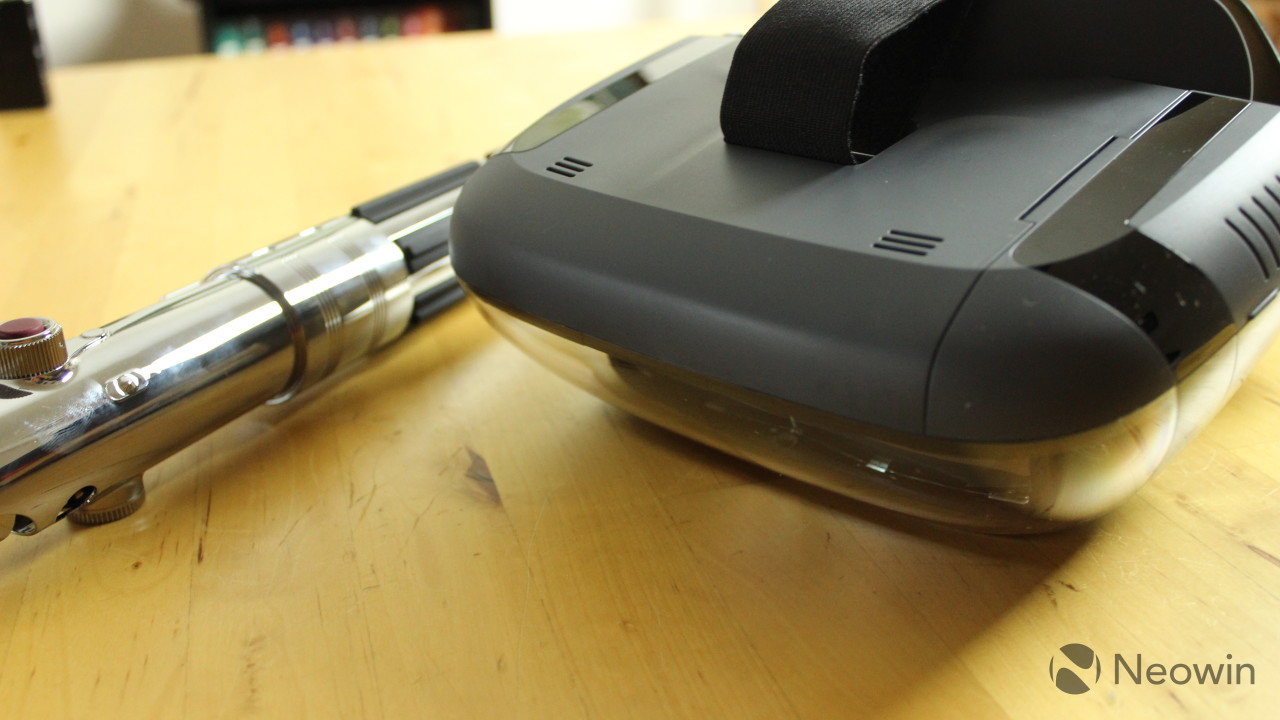 It's not too expensive either, and I think that $199 is a low cost of entry to a product like this. This is especially true considering that you're getting not just a headset, but the lightsaber controller as well.

I can't lie and say that there are no kinks that need to be worked out. There most certainly are. Calibration issues with the controller can even become frustrating at times.

Still, it's just so much fun. If you're a fan of Star Wars, or if you've ever dreamed of fighting against Darth Vader or Kylo Ren, then this $199 purchase should be a no-brainer. And remember, it's not just lightsaber fights. Strategic Combat is a battle simulation game, and Holochess is a lot of fun too.

I've been playing with this rig for a few days quite a bit, and I've still got much more to go. It gets pretty challenging, which means that there's plenty of replay value. With the whole game, there are countless hours of fun to be had. 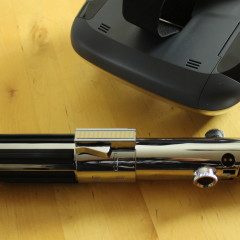 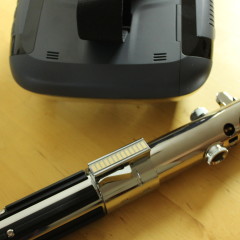 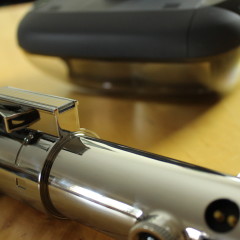 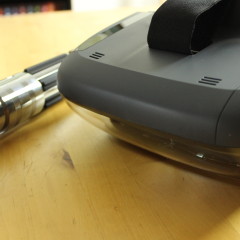 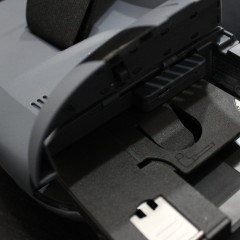 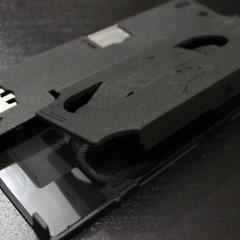 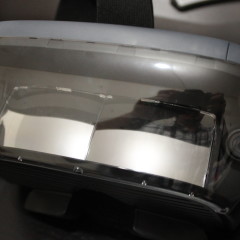 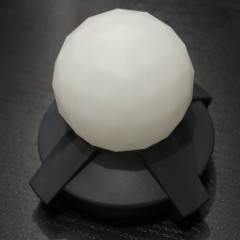 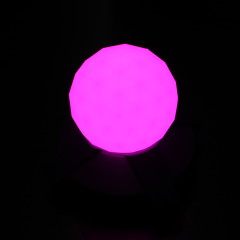 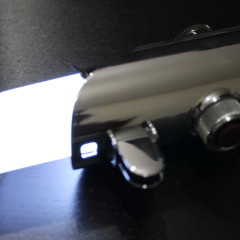 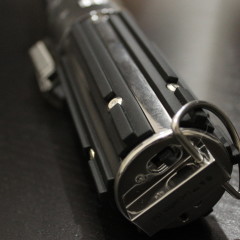 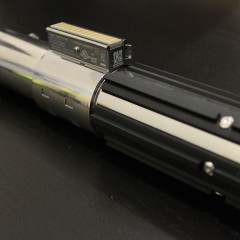