Last month's Humble Monthly Bundle that offered Civilization VI, among other games, has finally come to an end, and replacing it as the early unlock for this month is FromSoftware's massively popular action RPG, Dark Souls III.

Aside from the base game, the early unlock also includes the Ashes of Ariandel expansion, meaning the only thing you will need to pick up separately to get the complete experience is The Ringed City expansion. Expect deep discounts for the expansion to be rare, however.

The $12 bundle will be available for purchase until March 2, and once it comes to a close, the store will reveal the rest of the games that all owners will receive in addition to the early unlock. Note that a number of countries in Asia will be receiving Sid Meier's Civilization: Beyond Earth – The Collection instead of Dark Souls III due to region restrictions.

Meanwhile, the new Rockstar Bundle that Humble put forth earlier this week is essential for anyone who has yet to experience some of the earlier works of the studio. Arriving with a surprising lack of Shark Cards, the bundle offers 11 games in total that are split into three tiers.

Putting down just $1 will get you Manhunt, Max Payne, Grand Theft Auto III, and Grand Theft Auto: Vice City. Fun for the whole family, except for the families in regions that Manhunt is not available in.

Up next is the 'beat the average' tier, currently at almost $10, which adds on Bully: Scholarship Edition, Max Payne 2: The Fall of Max Payne, L.A. Noire, as well as Grand Theft Auto: San Andreas.

And finally, we have the $15 third tier, which brings along all games from previous tiers as well as Max Payne 3, Grand Theft Auto IV, Grand Theft Auto: Episodes from Liberty City, and the L.A. Noire: DLC Bundle.

However, note that the PC ports of some games in the bundle may have issues running on newer Windows systems. We suggest having a look at PCGamingWiki regarding workarounds and such for each game before trying them out. 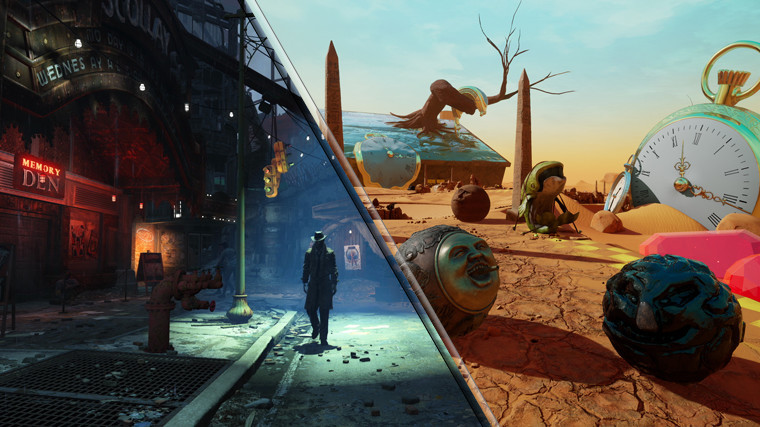 Fallout 4, Bethesda's newest entry in the post-apocalyptic series, is free on Steam this weekend. If you ever wanted to roam in a nuclear-ravaged city of Boston while killing mutated monstrosities, picking up random scrap until you become encumbered, and maybe dabble in building your own town, this is a great opportunity to do so.

Rock of Ages 2: Bigger & Boulder is also free to play this weekend on Steam. The game is a tower defense racing game that involves rolling around as a highly customizable boulder in surreal environments while destroying everything. It even has online and local split-screen multiplayer support for up to four players.

Now, with all those out of the way, let's have a look at some DRM-free deals that are on offer at the GOG store.