Acer's Swift 3 is a laptop that I grew to fall in love with throughout my time with it. When I unboxed it, I was immediately turned off by the fact that it has a USB 2.0 port and that there's an unreasonable amount of third-party software that comes pre-installed.

After I got rid of the third-party software though, the Swift 3 was really good to me. The matte display has vibrant colors, the keyboard is comfortable, but most importantly, the weight and size is just right.

Looking at the body from the outside, the Acer Swift 3 looks pretty standard. It comes in a silver-colored aluminum chassis, like so many laptops do. Picking it up feels different though. The weight feels evenly-distributed, and it's comfortable to hold. It's also comfortable to use on your lap. I found myself using it on the couch pretty often, and it felt good. 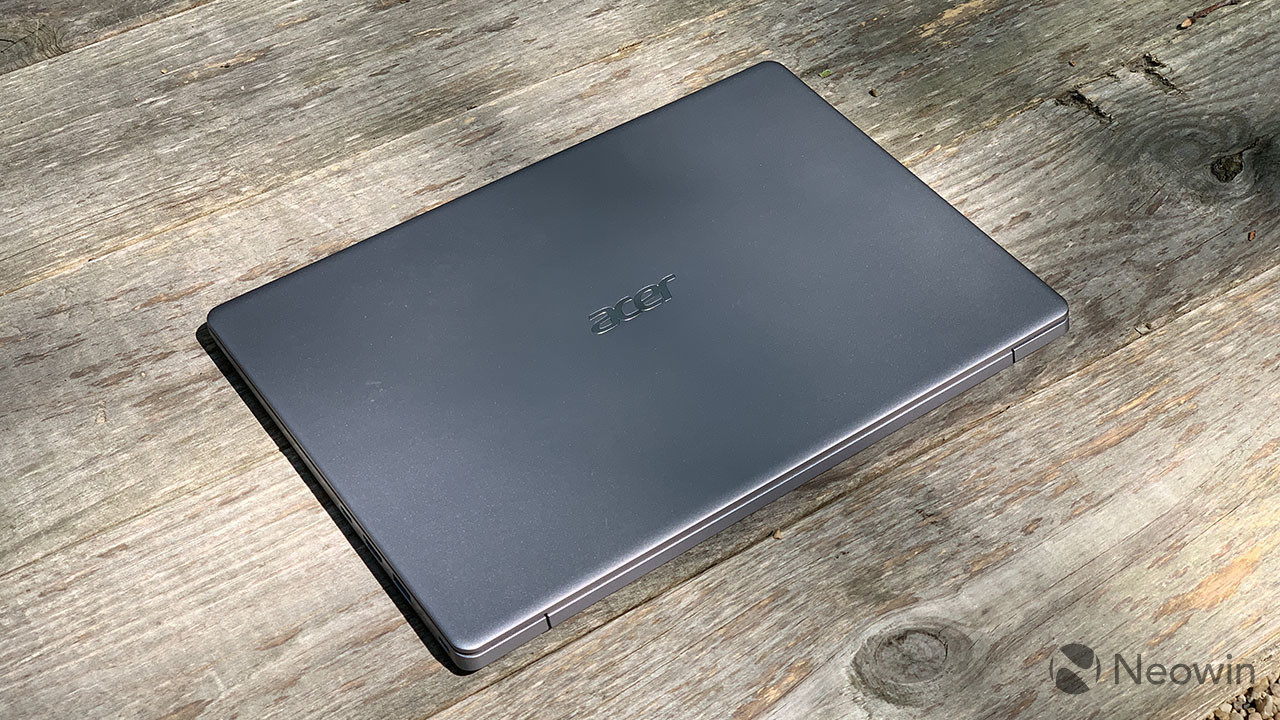 Stamped on the lid is a silver Acer logo, and the sides of the device are pretty flat, but the front is too. There's a tiny notch for opening the lid, and I think you'll actually have a hard time opening the Swift 3 with one hand. All of the seams are pretty flush. Like I said, there's nothing that really stands out from the design. 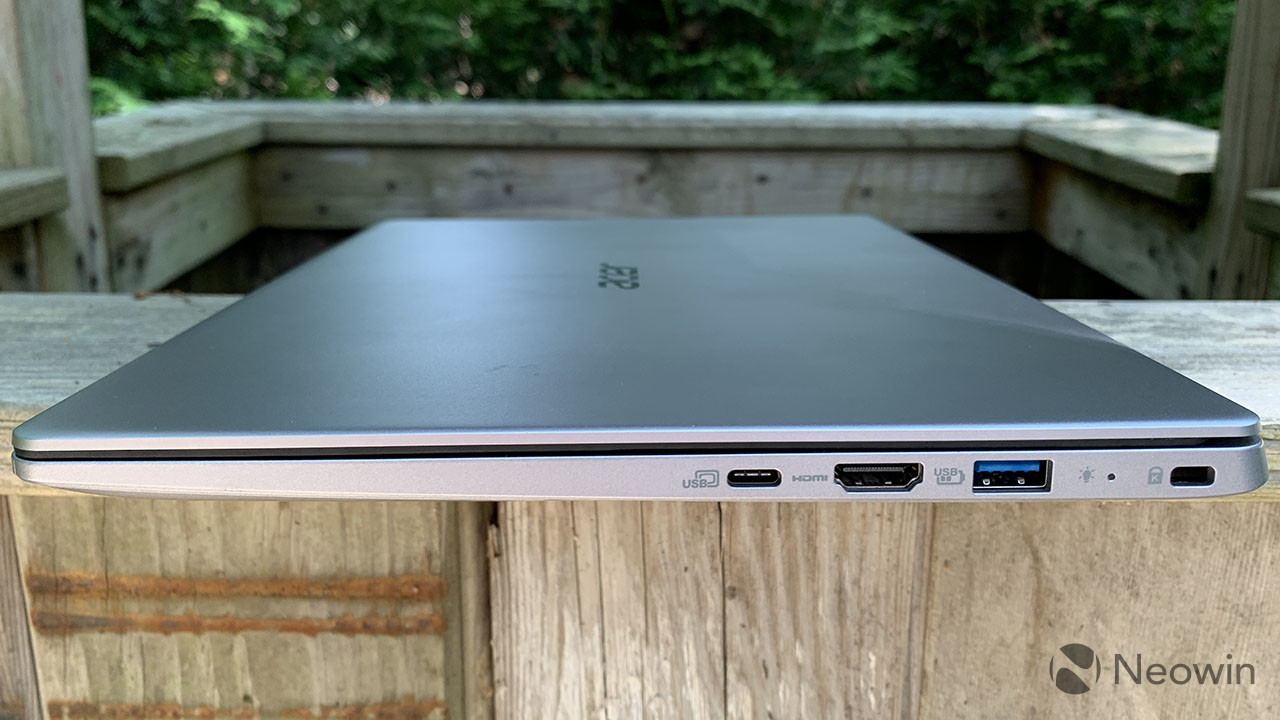 It has all of the ports that you need, and some that you don't need. On the right side of the device, there's a Kensington lock slot, a USB 3.0 Type-A port, HDMI, and a USB 3.1 Gen 1 Type-A port. Both of these USB ports are good for 5Gbps data transfer, because USB 3.0 and USB 3.1 Gen 1 mean the same thing, despite the way that many spec sheets are written. 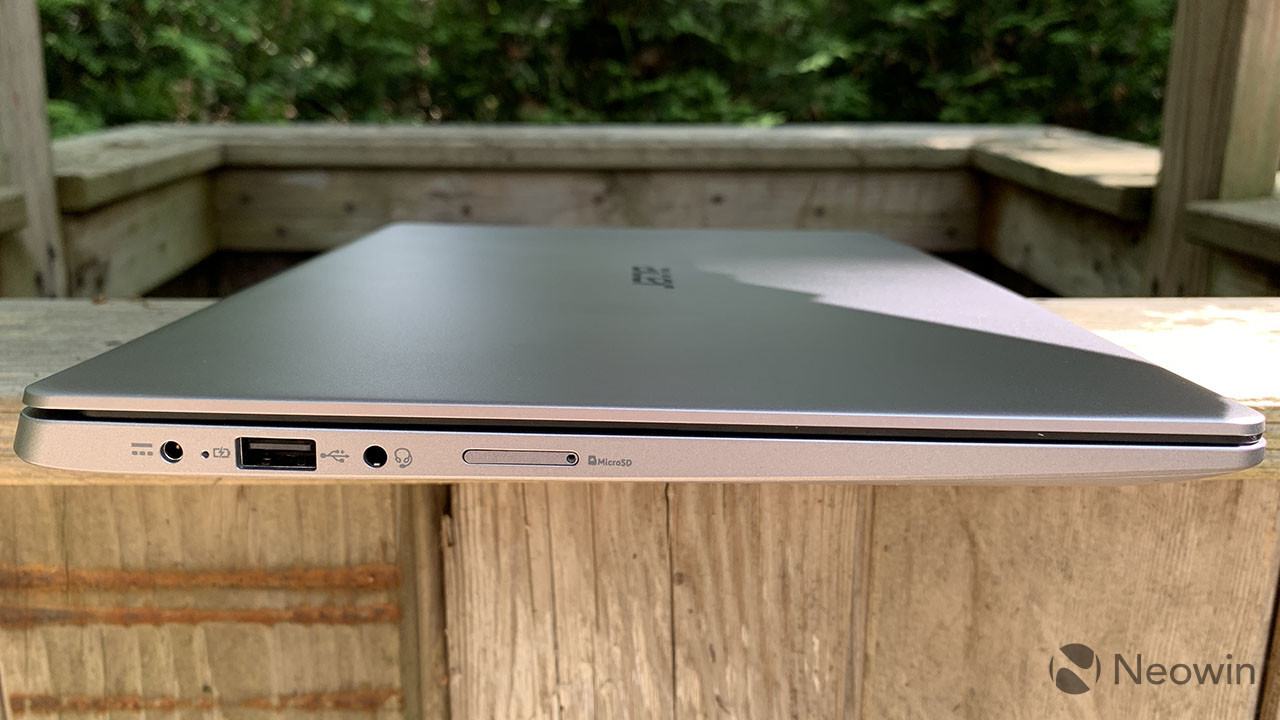 On the other side, however, you'll find a barrel charging port, USB 2.0 Type-A, a 3.5mm combo audio jack, and a microSD slot. USB 2.0 gets data transfer speeds of 480Mbps, and in my opinion, the world would be better off if OEMs stopped using it. I'd rather just have the single USB 3.0 Type-A port than have both. Besides, you're now asking the average consumer to know the difference between those two ports.

There's more bad news though, which is that the USB Type-C port cannot be used for charging. It comes with a 45W pin charger, and that's your only option. The other thing I don't care for, and it's really more of a personal preference, is that the microSD tray requires a pin to remove it. That means that you can't easily swap out microSD cards on the go.

But what I do appreciate is the overall build quality. It feels like it's just the right weight, not so light that it feels fragile and not so heavy that it will weigh down your bag.

The Acer Swift 3 comes with a 13.3-inch 1080p IPS display, but it also comes in 14- and 15.6-inch flavors. There's no support for touch, something that's really not an issue in clamshell devices. 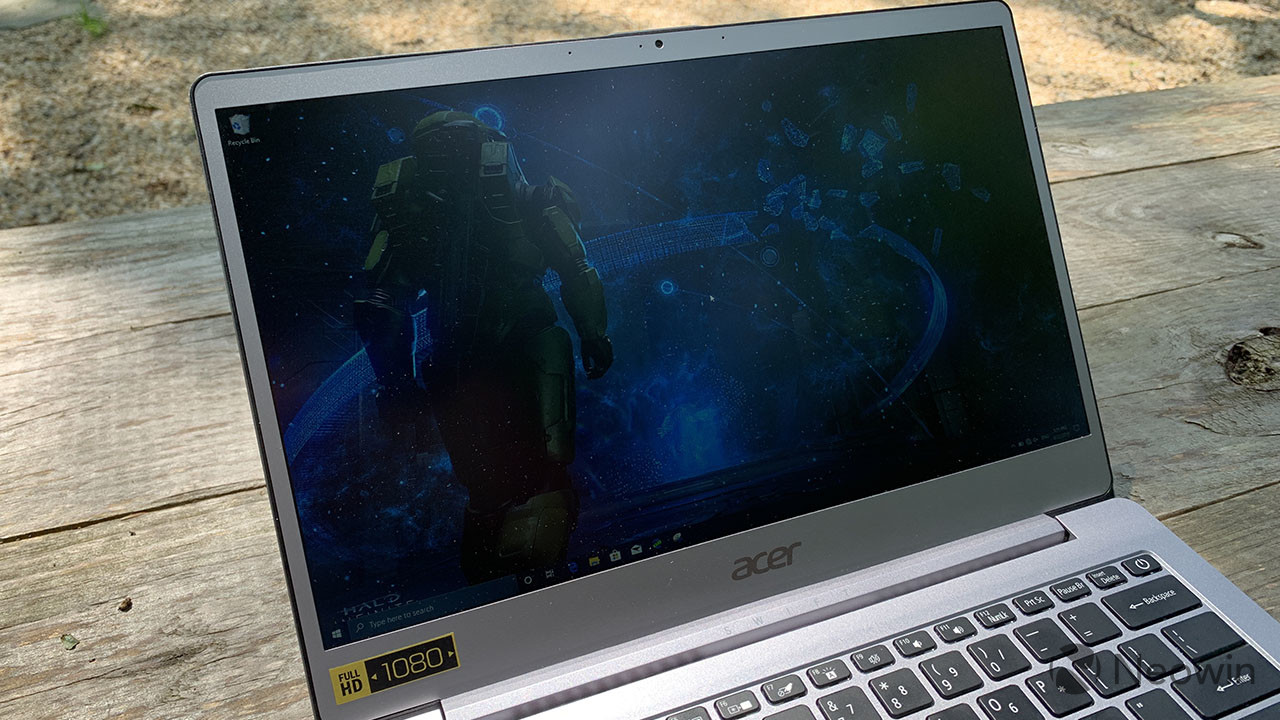 It's a matte, anti-glare screen, which actually looks pretty good. I say 'actually' because a lot of anti-glare screens that I've seen look washed out. I'd note that over the past six months or so, I've seen more and more good ones though, so as on HP's EliteBook x360 1040 G5. The colors look vibrant without looking too bright. It sort of reminds me of Samsung's The Frame TV, which barely even looks like it's a screen. 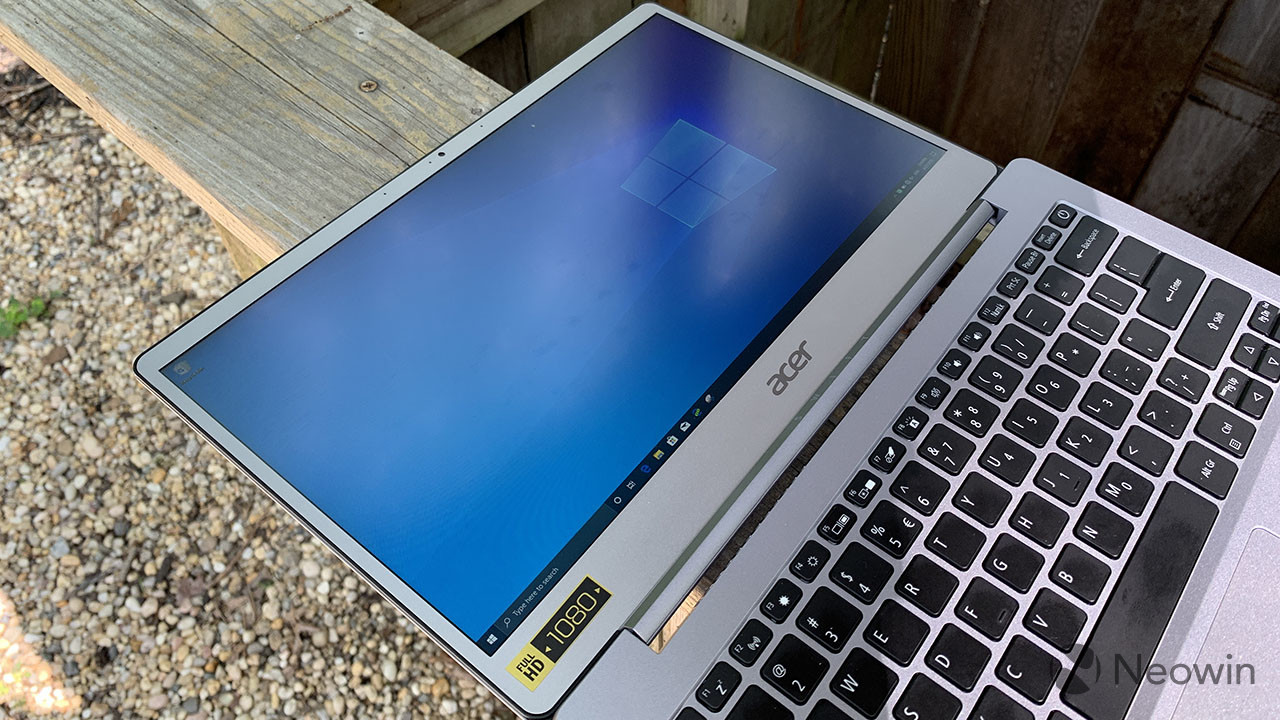 It does get the job done outdoors though. As long as you're looking directly at it in bright sunlight, you'll be alright. Indoors, the viewing angle is great, although it's not a full 178 degrees. The FHD display is definitely one of the more impressive parts of this machine.

The Swift 3 has narrow bezels on the left and right sides, with a slightly larger bezel on top. This is where the 720p webcam is placed, although there's no IR camera for facial recognition. If you want to use biometric authentication, you'll have to use the fingerprint sensor. The bottom bezel is pretty large, which isn't uncommon. It's where you'll find a big Acer logo, and it also props up the screen. I'm not even sure the bottom bezel could be smaller, as there isn't really any room to be cut out of the keyboard deck, which would be necessary for the smaller footprint.

If you watched my unboxing video, you've seen that I noted that the keyboard felt weird when I first opened it. That's because I've never reviewed an Acer PC before, and the keyboard is slightly different in design than the ones made by competitors, and not in any meaningful ways. There was just something about it that felt a bit different. 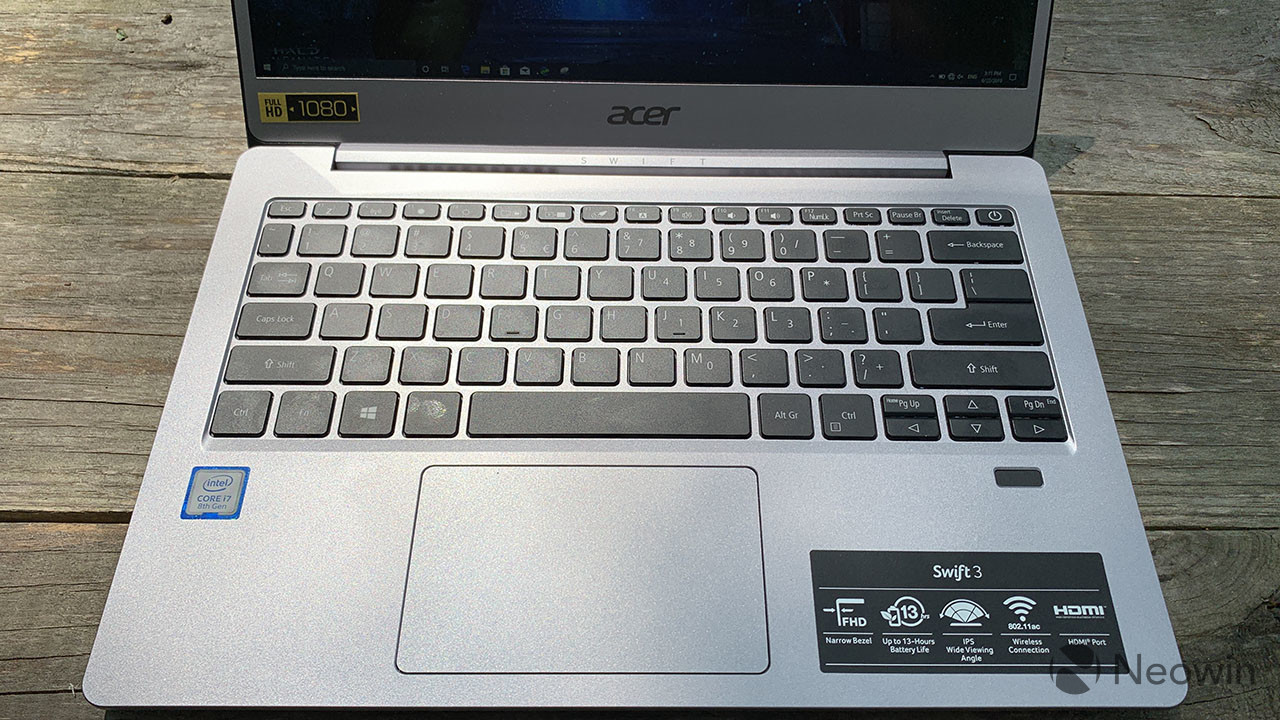 The keyboard is comfortable and accurate though, which is all I really need. It's a bit louder than I'd like, although it doesn't have the clackity sound that you get from cheap devices. The keys aren't wobbly at all either. The backlight is pretty bright, something I found impressive.

One thing that took some getting used to is that the directional keys are small. Again, there are plenty of keyboards like this, so this is more personal preference. The bottom-right corner of the keyboard included six keys in a 3x2 grid. The top-left and top-right keys are Pg Up and Pg Dn, so I'd find myself accidentally pressing those from time to time. 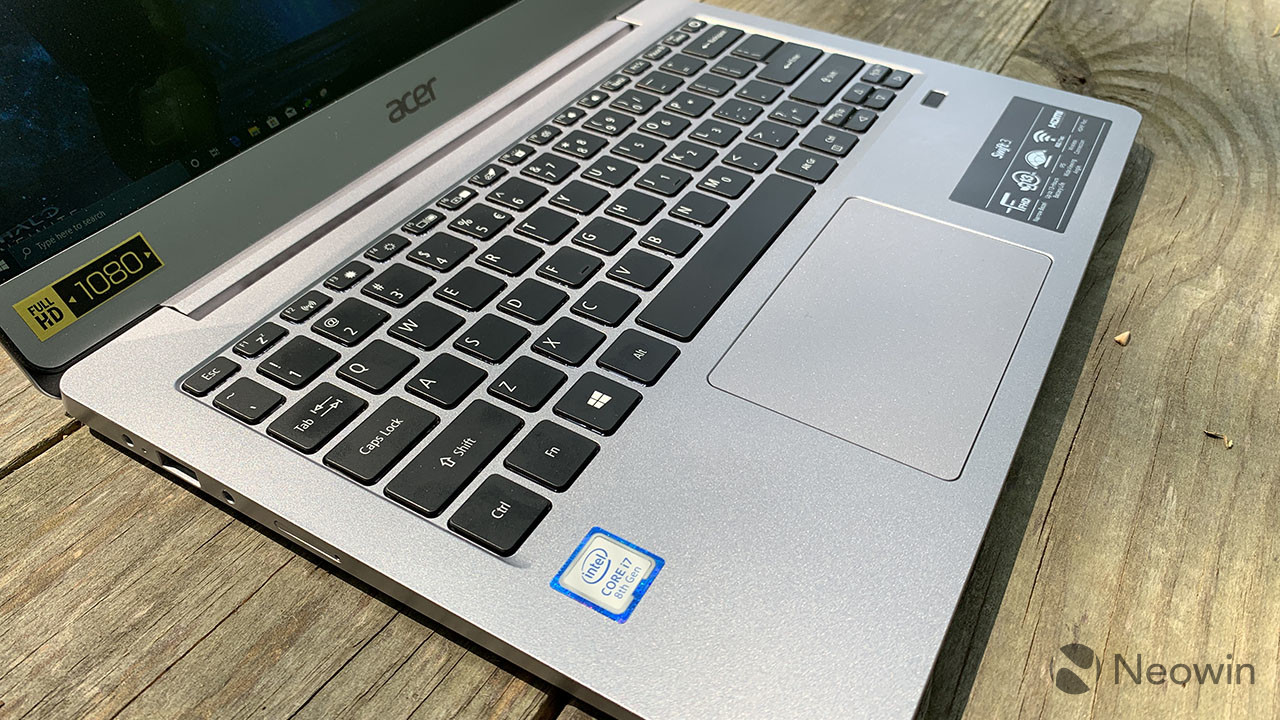 As you'd expect from any modern PC, the clickable trackpad uses Microsoft Precision drivers. It gets the job done, and the trackpad is large enough, not really wasting any space on the keyboard deck. 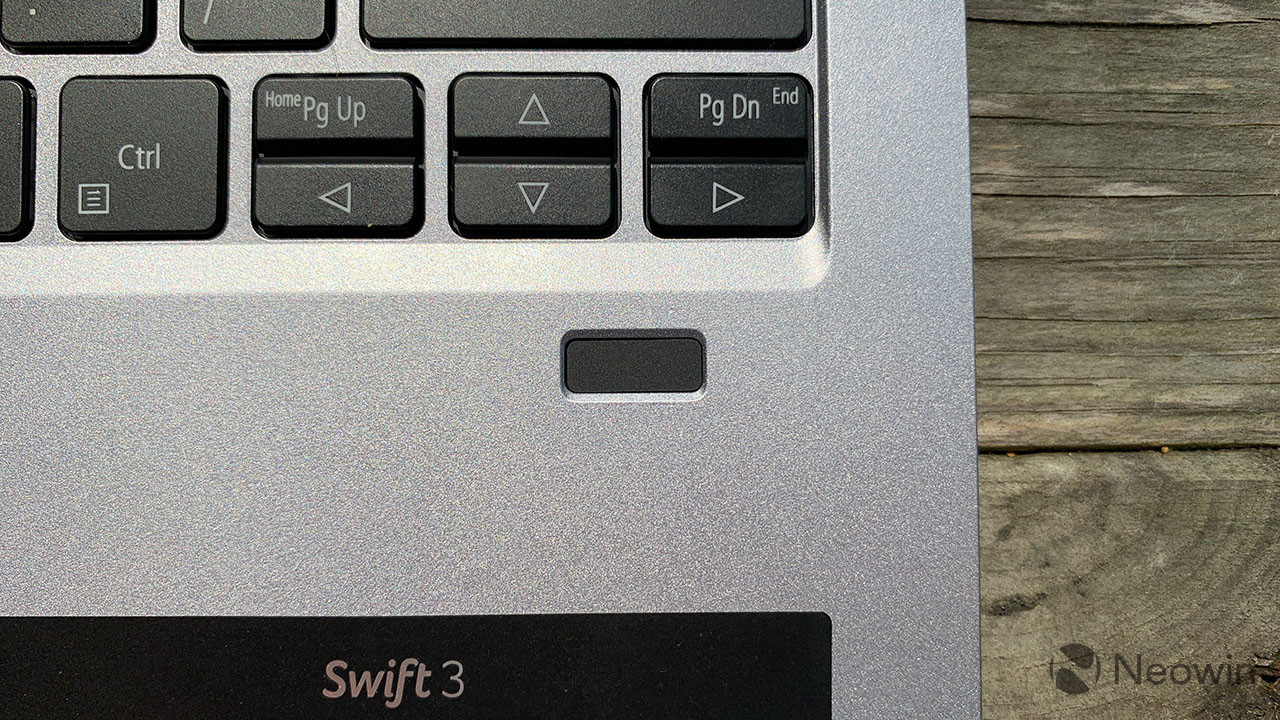 To the bottom-right of the keyboard, there's a rectangular fingerprint sensor. This felt like another odd choice in the land of square fingerprint sensors that everyone else uses. I was skeptical about this, expecting that a smaller sensor would mean less accuracy. It works great though; no issues there.

Ultimately, I was impressed with everything on the keyboard deck, and that's why I fell in love with this PC. The build quality is great, the display is practical yet beautiful, and it has a solid keyboard. That combination was enough to make me forget about the Swift 3's shortcomings.

Speaking of shortcomings, the Acer Swift 3 comes with a ton of third-party software, and that's not including the crap that Microsoft pre-loads into Windows 10 like Bubble Witch 3 Saga, Candy Crush Friends, and Microsoft Solitaire Collection. Here's a list:

First of all, many of these are easily uninstalled. They're Store apps, so they're just a few clicks from being removed. What seems strange to me is that these apps are very much designed to provide alternatives to the ones provided by Windows 10. You can use Firefox instead of Edge, Evernote instead of OneNote, Simple Solitaire instead of Microsoft Solitaire Collection, and so on.

Acer Collection S and App Explorer seem to have the same functionalities, which is to have a directory of apps. Choosing to install one just takes you to the Microsoft Store. 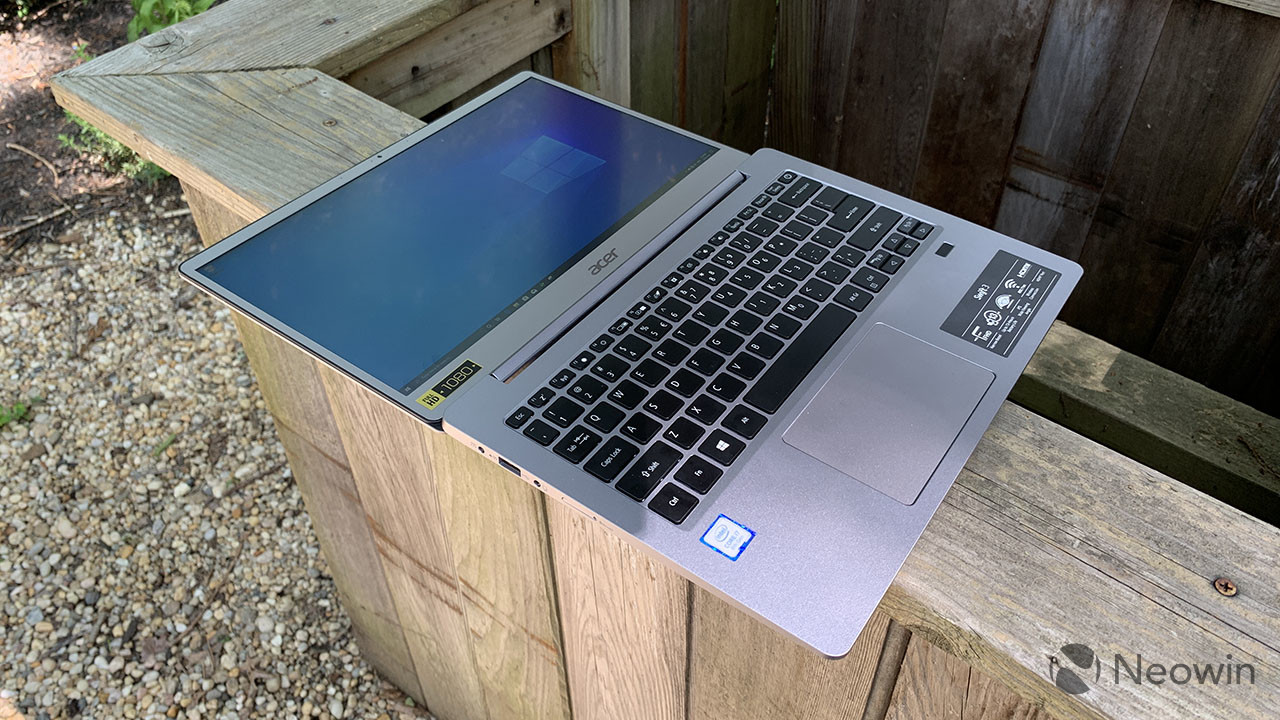 I do wonder if this is ever useful to customers. Sure, casual games are popular. Any of us that are old enough spent hours playing Solitaire on Windows 95. Perhaps it's worthwhile to provide the selection.

Not for me though. The first thing I do on any new PC is uninstall all of this stuff. The good news is that once it's gone, it's gone. It doesn't affect the overall experience after that.

What bugs me about this is that the Swift 3 isn't a $300 laptop that's getting subsidized by companies installing their software. This is a high-end $900 machine. Everything else that I review at this price point only comes with antivirus software, and that's it.

The Acer Swift 3 packs an Intel Core i7-8550U, 8GB RAM, and a 512GB SSD. The CPU is from the Kaby Lake R family, which is the first generation of eighth-generation Core CPUs. They're pretty much like the seventh-generation chips, except they're quad-core instead of dual-core. Naturally, there are eight threads, and it has a 15W TDP.

I was a little disappointed that it came with 8GB RAM instead of 16GB, but it never choked up on me unless I was using it to edit videos or something. I also used it for compiling Windows 10 apps in Visual Studio and Android apps in Android Studio. It went smoothly, or as smooth as can be expected from a laptop.

This machine is really built for productivity though, and for tasks like that, it does great. My workflow involves typing in the browser, and then I also have apps like OneNote, Skype, Slack, and To-Do running at the same time. I never ran into any issues.

Battery life is pretty solid too, although it will start to drain faster under intense workloads. Under a normal productivity workload, it should get about seven hours. Remember though, you have to have the pin charger to charge it up. If you've got a USB Type-C charger lying around, that won't work.

As you can see, it does pretty well. It's about what I'd expect from a Core i7-8550U with integrated graphics. Next up is the Creative test, which checks more GPU-intensive tasks like video editing, mainstream gaming, and more.

Once again, the Swift 3 is par for the course. The Work test checks productivity-related tasks like writing and spreadsheets.

As usual with specs like this, the Work test is where it really shines. Finally, I ran PCMark 10's all-in-one test, really just for those that like to keep score. 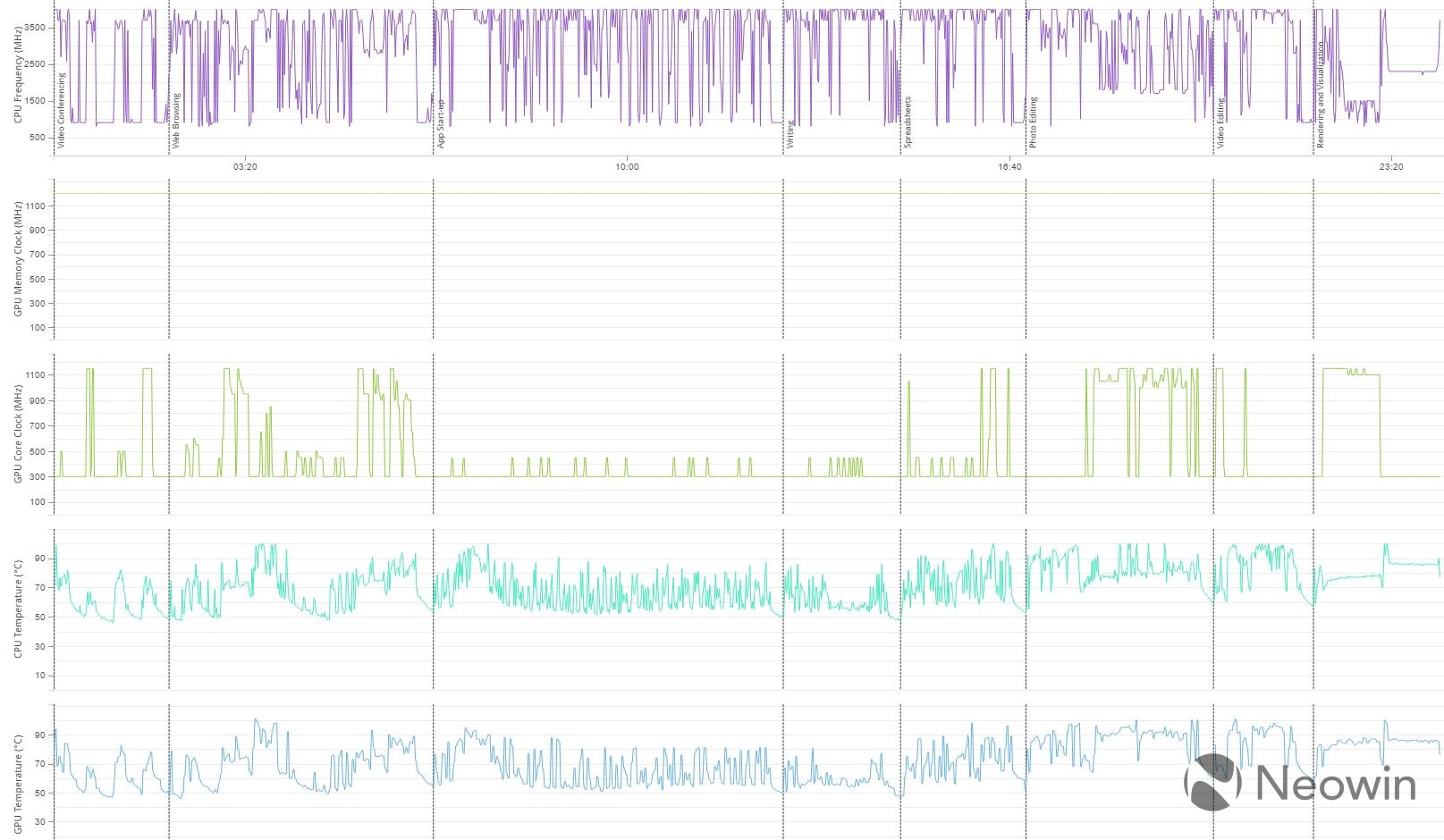 The Acer Swift 3 really is a solid device for $899. As I mentioned before, the build quality, the solid keyboard, and the vibrant anti-glare display made me forget about its shortcomings.

But to recap, those shortcomings are that it has a USB 2.0 port, you can't charge through the USB Type-C port, and it has a ton of third-party software. These are things that I don't expect to find at this price point, at least if the manufacturer is trying to offer some value for the consumer's dollar.

Other than the issue with charging though, most of that stuff is easy to overlook. The day the Swift 3 arrived, I uninstalled all of the third-party software, and I forgot about it. I reset the PC prior to writing this review just so I could make a list. The USB 2.0 port was easily forgettable too; I just don't use it. In fact, I rarely use any USB Type-A ports anymore, let alone two of them at once. 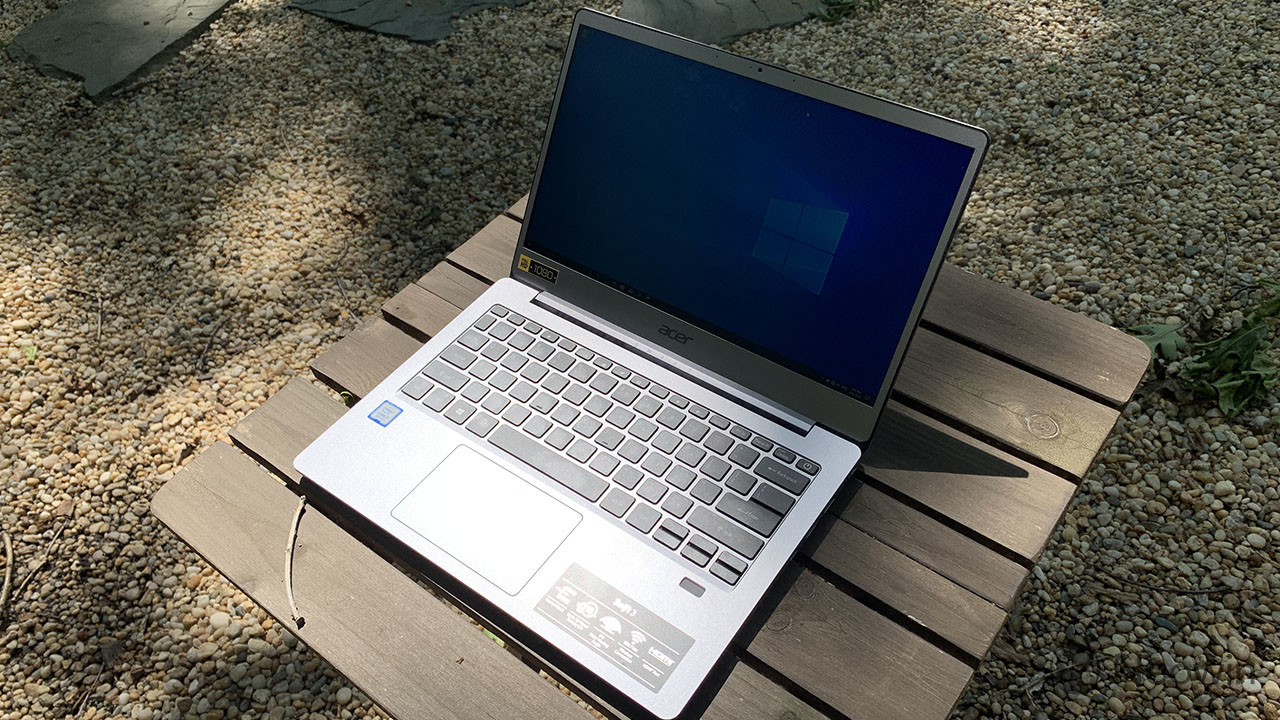 And that leaves us with a really solid PC. It weighs in at 2.87 pounds, and that weight feels well-distributed. It's light and easy to carry. The footprint is small, so it's easy to throw in a bag. The screen is really easy on the eyes, and while it gets bright enough to function, it doesn't feel like it's brighter than it needs to be.

As long as you don't have a bunch of spare USB Type-C chargers lying around that you want to be able to use, the Acer Swift 3 is a great PC for $899, with its Core i7 and 512GB SSD. It's a good option if you're looking for portability and a small footprint. Definitely shop around though, because you might find some better deals around this price point. 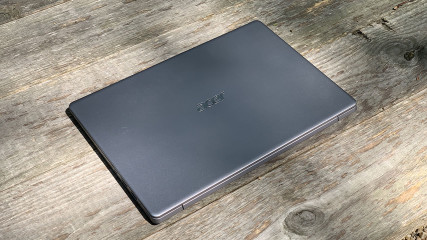 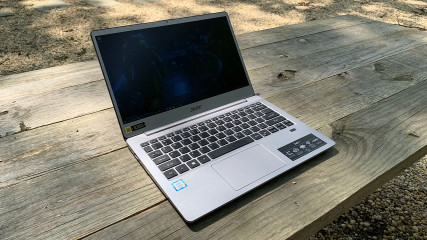 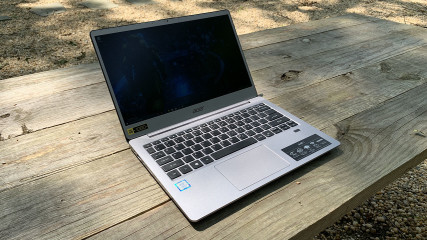 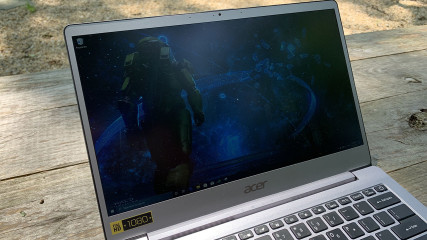 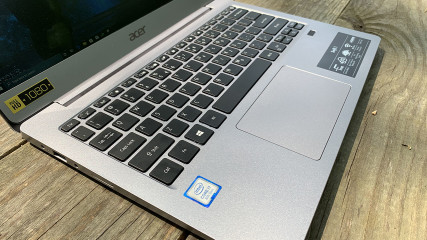 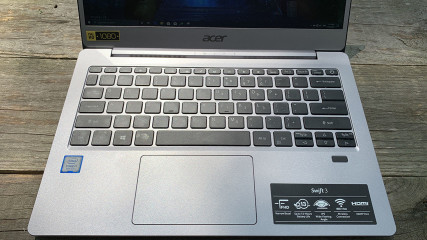 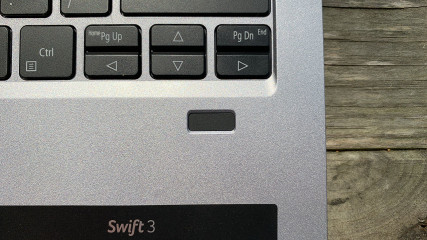 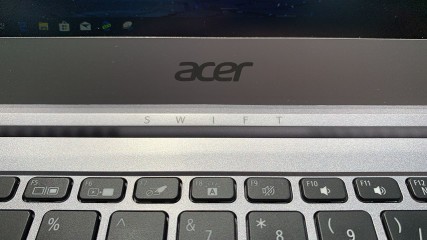 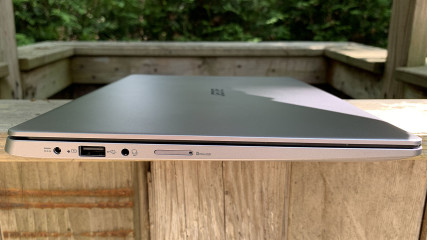 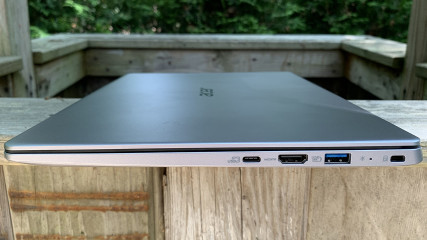 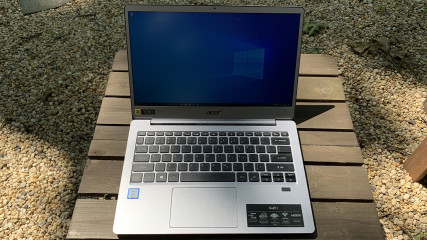 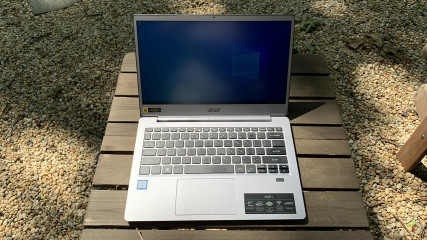 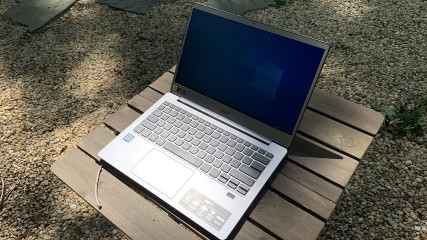 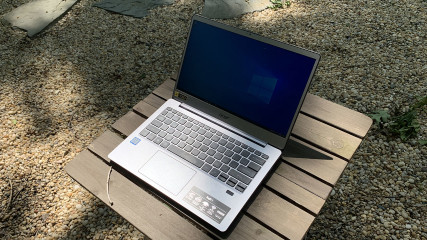 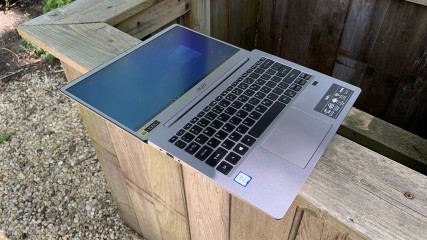 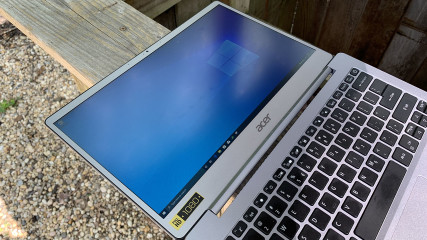 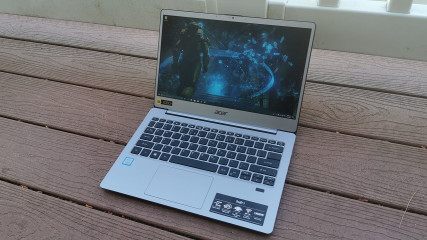