32 million Ashley Madison users were exposed earlier this week after the service was breached by hacking group, the “Impact Team”, exposing cheaters worldwide. At least 60GB of emails, addresses, search history and messages were released on unencrypted files on the dark web, and has since been accessible by searchable databases, making it even easier for suspecting partners to find out if their spouses are unfaithful.

To make matters even worse for people, extortionists are now trawling through the database and demanding Bitcoin payments from users. According to security researcher Brian Krebs, criminals are threatening to expose users to their significant others, unless a payment of exactly 1.0000001 BTC ($232 USD) is paid into their wallets.

The North-Virginian based researcher was forwarded an extortion email, which requested the money be sent to a Bitcoin wallet within seven days. Why is such a particular amount requested, you might ask? In the words of the criminal, “sending the wrong amount means I won’t know it’s you who paid”. 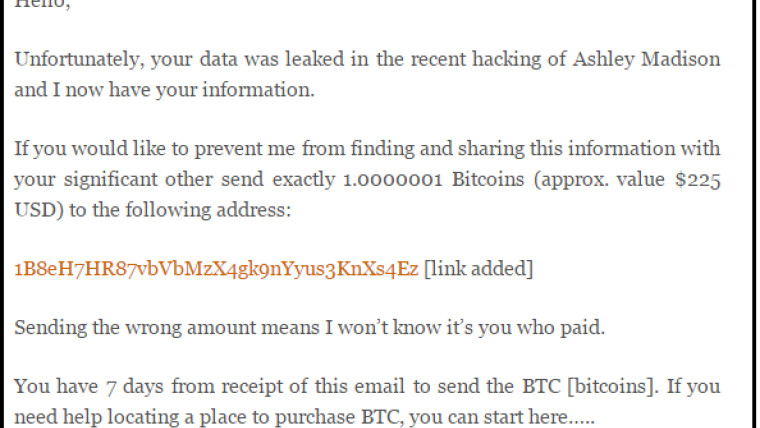 This particular extortionist has not been particularly successful, only receiving 0.0032 BTC since last Wednesday’s hacking scandal.

Tom Kellerman, chief cybersecurity officer at Trend Micro, told Krebs that the situation will only become worse as extortion attempts increase in number, sophistication and targeting. Kellerman also fears criminals will use the data to deliver malicious software, such as ransomware, which is used to lock a victim’s computer for a ransom.

“There is going to be a dramatic crime wave of these types of virtual shakedowns, and they’ll evolve into spear-phishing campaigns that leverage crypto malware. The same criminals who enjoy deploying ransomware would love to use this data.”

It is notable that if the situation cannot be contained and effective measures not taken against extortionists, there is a grave threat of people potentially losing millions of dollars through blackmailing.

Source: Krebs On Security via Gizmodo