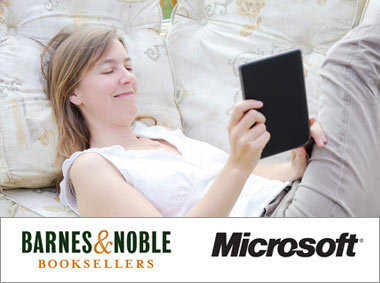 Barnes and Noble, the biggest book seller in terms of the number of retain stores, has seen better days. A few days ago, the company stated that for the fourth quarter of 2012, it recorded a net loss of $6.1 million. Part of that loss was due to its Nook tablet business, which saw its revenues fall over 26 percent to just $316 million for the quarter.

At the same time, Barnes and Noble stated in a press release that its Chairman and largest shareholder Leonard Riggio is trying to make a bid to buy the bookstore part of the business, but not the Nook Media portion. Microsoft currently owns 16.8 percent of Nook Media, which is worth at the moment about $300 million.

That has led some analysts to speculate that Microsoft could come in and buy Barnes and Noble. Barron's posted a story this weekend that stated:

B&N's current market value is $1.1 billion based on 70 million outstanding shares and it has a net cash position. Microsoft could pay $25 a share, or $1.75 billion, and gain full control of Nook plus the retail stores, which produced $371 million of pretax cash flow in the past 12 months. That price would be modest relative to Microsoft's $60 billion-plus in cash.

The author says that such a move could instantly give Microsoft over 600 retail stores all over the country and that it could launch a store-within-a-store to sell products like the Surface tablet.

Others disagree. The Motley Fool posted its own story which said:

There's no way that Microsoft could fill the cavernous Barnes & Noble stores, which also happen to be largely located in strip malls that lack the foot traffic of Apple's smaller footprint in shopping malls. If Microsoft wanted that girth, it could've picked up Borders' remnants for a pittance two years ago.

While that may turn out to be true, it's also true that Barnes and Noble's attempt to launch its own eReader and tablet lineup in the Nook to compete with Amazon's Kindle family has been met with indifference by the general public. With the exception of creating a Nook app for Windows 8 and RT devices, we have yet to see anything concrete from Microsoft in terms of its collaboration with Barnes and Noble. Microsoft might not want to buy a bookseller but it might have to either take full control of the Nook business or cash out of it while it still can.