Dell's XPS 15 laptop is something of a unique device. Most HQ-series processors end up in gaming laptops, so if you really want that kind of CPU power, but you're not a gamer, there simply aren't a lot of options.

On top of that, it includes an Nvidia GeForce GTX 1050 GPU, so it certainly has the power for some casual gaming. The thing is, laptops that are specifically built for gaming tend to lack things like Windows Hello, a touchscreen, or a keyboard that's good for getting work done.

The XPS 15 delivers that kind of power but in an ultrabook form factor. Here's our review:

Dell's XPS 15 is a clamshell laptop, so there's no 360-degree hinge or detachable display. If you want something that can be used as a tablet, or comfortably with a pen, look elsewhere. This machine is more about productivity and power in a portable package.

It weighs in at 4.5 pounds, and comes in at two-thirds of an inch thick, so this does qualify as an ultrabook. It's neither the thinnest nor the lightest Core-series laptop that you'll find, but it's certainly among the thinnest and lightest for a device with an HQ processor and Nvidia GPU. 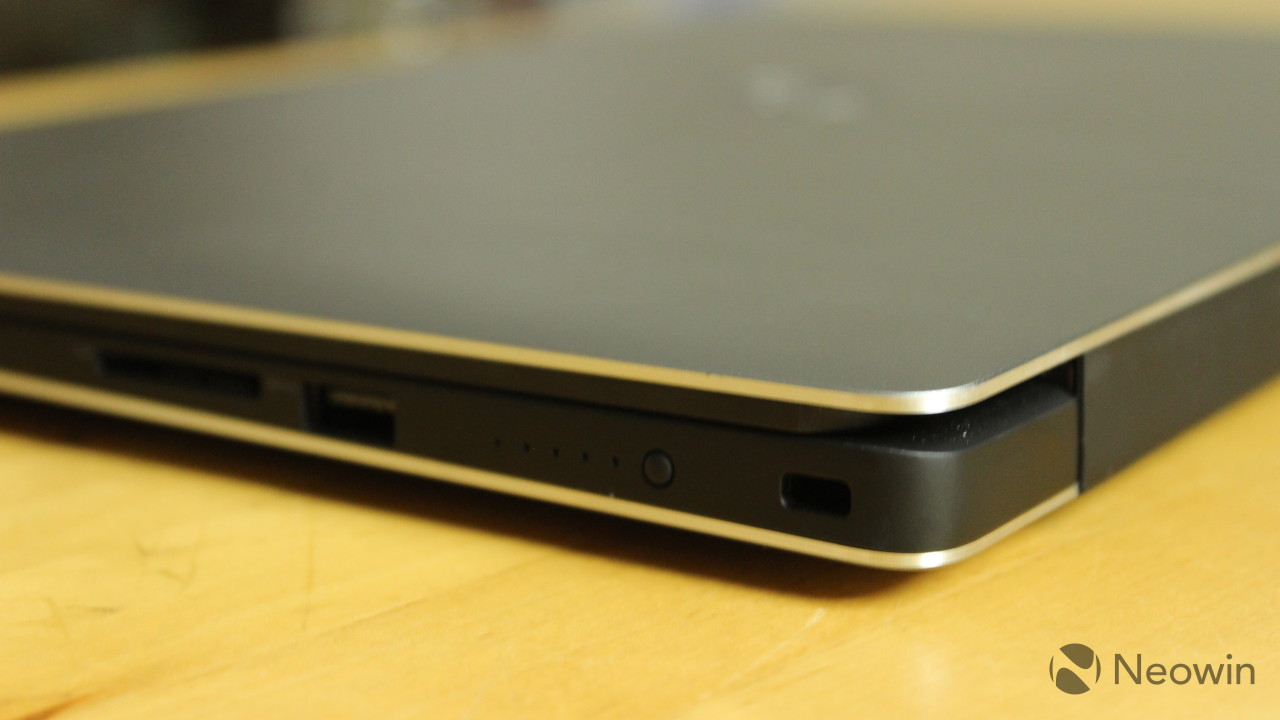 The outside of the body is made out of machined aluminum, as it comes in a silver color. The inside is all black though, as the palm rest is made out of carbon fiber, giving it a softer and cooler feel, similar to Lenovo's ThinkPad lineup.

Below the keyboard, in the middle of the device, is the trackpad, and off to the right is the fingerprint scanner that's used for Windows Hello. To the right of and above the keyboard is the power button. The front camera is placed below the display, which is renowned for being the worst design choice in the XPS series. 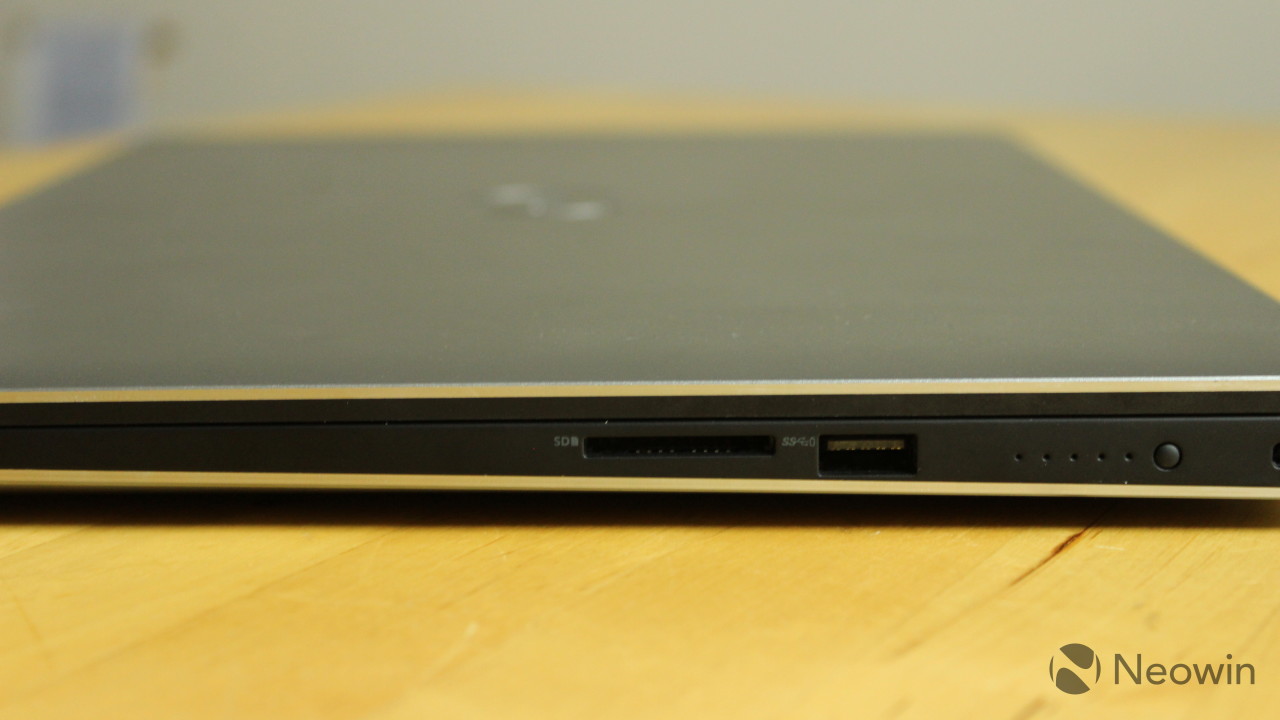 On the right side of the device itself, you'll find a USB 3.0 Type A port with PowerShare, an SD card slot, and a Kensington lock. On the left is a second USB 3.0 Type-A port, HDMI 1.4, 3.5 audio input/output, proprietary power, and a Thunderbolt 3 port. 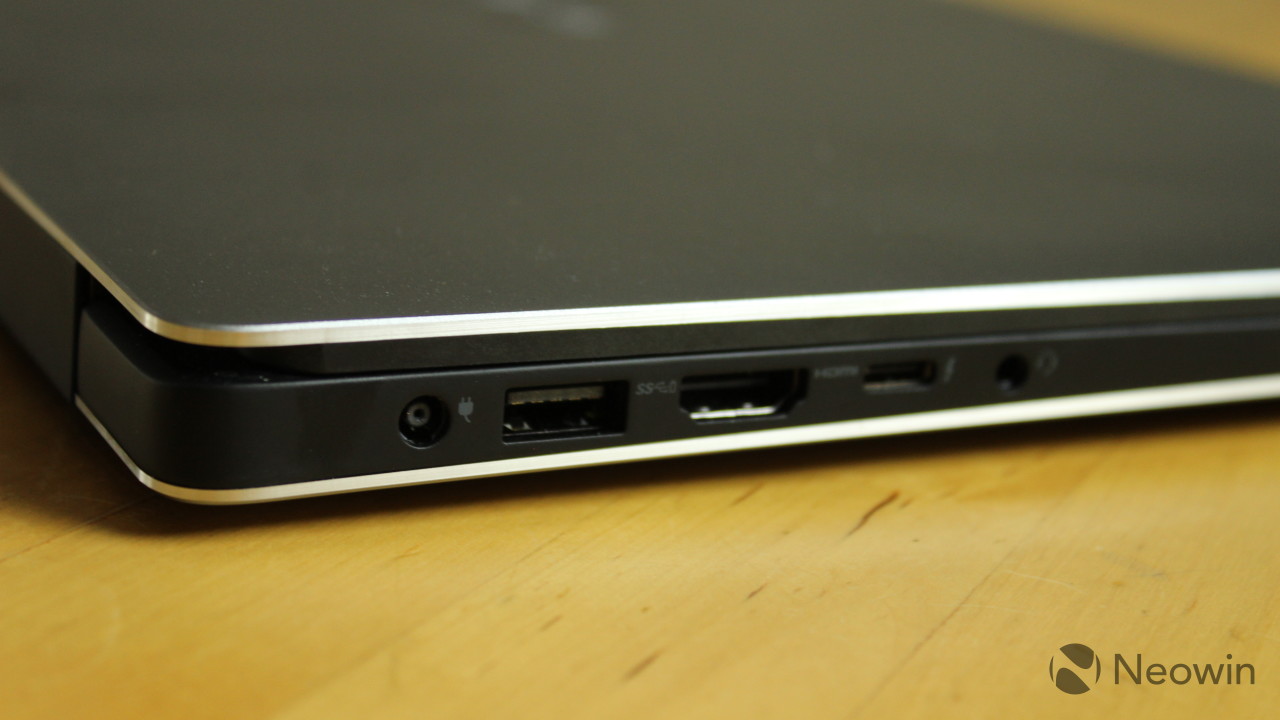 The screen on the Dell XPS 15 looks awesome. It's a 15.6-inch 4K IPS LCD touchscreen, and the company says that it has the only 100% minimum Adobe RGB display on a laptop. And the specs don't lie, as it looks fantastic. 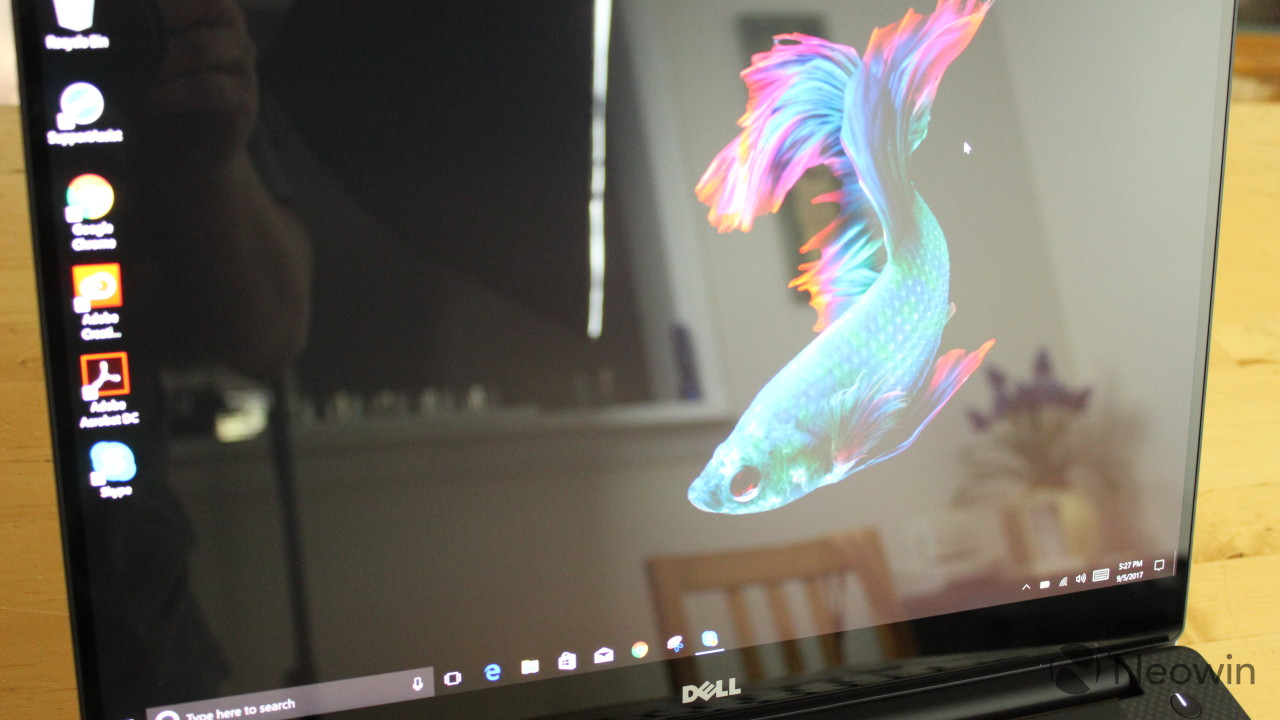 Normally, on a 4K laptop, this would be the part where I complain about how much the screen drains the battery, but I hardly think that's an issue when you consider everything else that's sucking down power on this machine.

Dell also promises that it gets 350 nits of brightness, and has a 1,000:1 contrast ratio. There's a 170-degree viewing angle, which means that if you can see the screen, you can read what's on it.

Of course, Dell is known for its InfinityEdge displays, and this one's bezels are just 5.7mm. Indeed, on the top, left, and right, it almost feels like there are no bezels at all, but unfortunately, that's also why Dell can't fit the front camera above the display.

OK, so just to be very clear about this, battery life on the XPS 15 sucks. I also want to point out that with the amount of power that this thing uses, it has a great excuse for it, but it does suck. In a laptop, you have a choice between power and battery life. With the XPS 15, you're choosing power.

Dell says that if you're using productivity apps like Word and Excel, the XPS 15 gets up to 19.5 hours of battery life, and 11 hours and 48 minutes of watching Netflix. I don't know how accurate these are because those tests aren't very relevant, as neither of them reflects the real world.

In real-world usage, I get six hours at the most from the XPS 15, with the average usage being around four hours. My regular usage includes the Chrome browser, Skype (desktop), OneNote for Windows 10, and the occasional Photoshop. Since I was looking to do more powerful tasks on the XPS 15, I also used apps like Adobe Premiere Pro. I also used it for playing games, such as Cuphead and Gears of War: Ultimate Edition.

Naturally, the more that you utilize the power of this machine, the faster it will drain the battery.

As far as charging goes, you have the choice of using Dell's proprietary port or using the Thunderbolt 3. The proprietary cable included in the box is 120W, and if you try to use a charger that's less than that, you'll get a warning when you boot up the machine, which you can turn off in the BIOS.

The Dell XPS 15 uses a fingerprint reader for Windows Hello. I always prefer facial recognition on a laptop, as it feels more natural to open it up and have it just recognize you, although it would probably be terrible on the XPS 15 given the front camera placement. 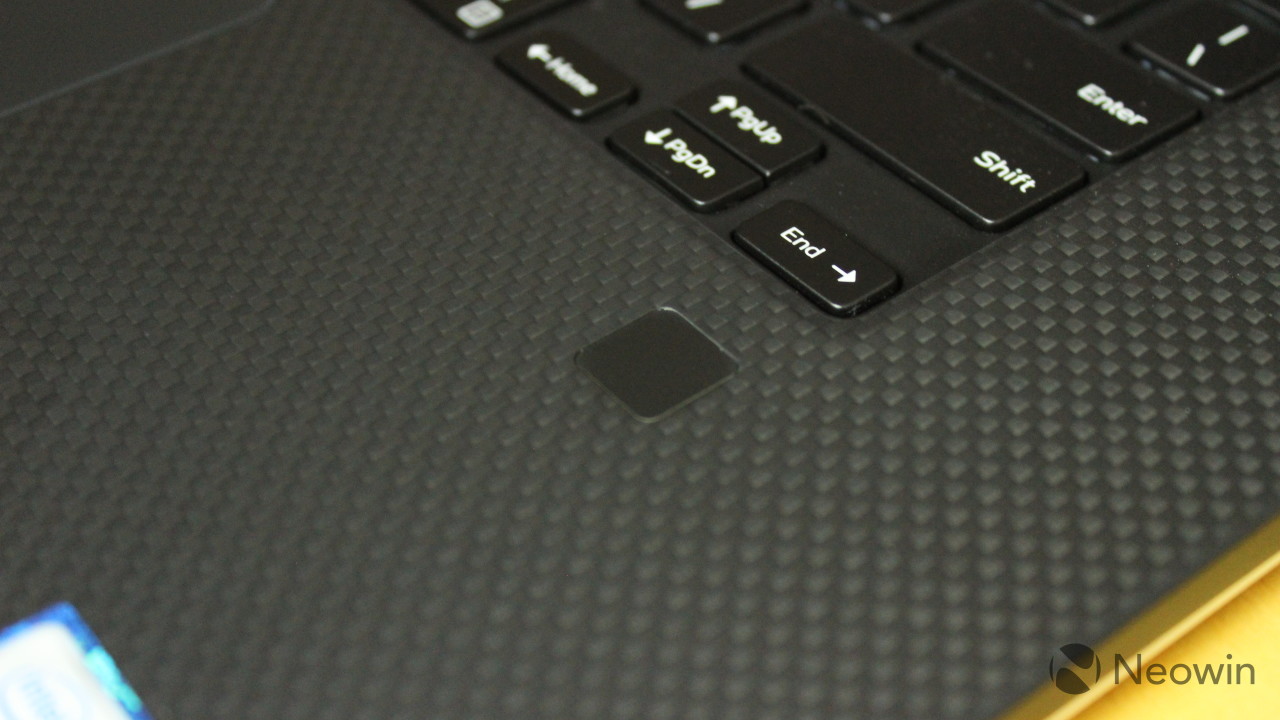 The good news is that it's a good fingerprint reader. It seems to be accurate enough to where it never really has a problem recognizing me. It's not blazingly fast or anything, but I'm happy with it given that I don't have to go through the annoying procedure of scanning my finger, it failing, and having to type my PIN.

The point is that Windows Hello on the XPS 15 works, and there's really not much more to say there.

Obviously, the keyboard on a laptop is very important to me, as I use it throughout my entire workday. The ultimate test for a laptop keyboard is always whether or not I can make it through an entire review by using that device only, and the XPS 15 passes. 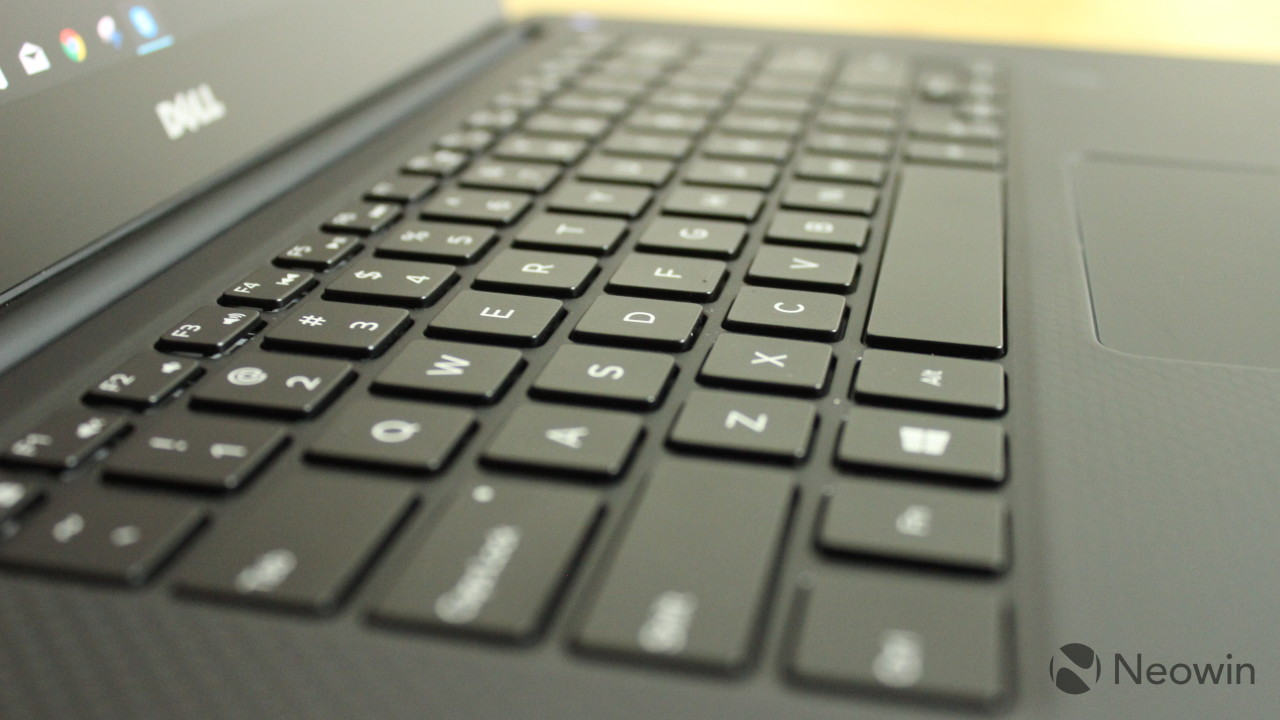 I really can't explain it. The backlit keyboard doesn't have any special design like on Lenovo's ThinkPads, and there are no special mechanisms like on Apple's MacBooks. It just feels comfortable to type on.

And it's accurate too. An issue that I've had with Windows laptops before is that some are hyper-sensitive, where they'll type characters twice at times, and some aren't sensitive enough. The XPS 15 feels just right, with the right amount of space around keys so that there aren't many typos.

The Dell XPS 15 ships with Windows 10 Home, something that I always find disappointing in a premium device. After all, your reason for wanting a quad-core processor might be because you want to run VMs in Hyper-V and do software development. Unfortunately, you'll need a $99 Windows upgrade to get Hyper-V.

What's most offensive is that it comes with McAfee pre-installed, the software that just about everyone hates. Unlike a Dropbox app that's easy to uninstall, you need to jump through some hoops for McAfee, and there's no way to do it without it leaving some trail of crap on your machine.

Performance is where the Dell XPS 15 really stands apart from the pack. The company says that it's the lightest performance class laptop on the planet, and that seems to be pretty accurate.

The laptop contains an Intel Core i7-7700HQ processor. To break that down, the first '7' in 7700 means that it's seventh-generation 'Kaby Lake'. The 'HQ' means that it's high-power and quad-core, whereas most laptops use a U-series chip, which is low-power and dual-core (quad-core in eighth-generation). This processor is similar to what you might find in a gaming laptop.

And then there's the Nvidia GeForce GTX 1050 GPU with 4GB of GDDR5 RAM. You'll usually find a 1060 with 6GB or higher in a gaming laptop, but as I mentioned earlier, this isn't a gaming laptop. It's a powerful ultrabook, which you can still play some games on.

Of course, I also used it for editing videos in Adobe Premiere Pro and any other tasks that I could think of to tax the CPU and GPU. It actually struggled with these things coming out of the box, but with some updated drivers (mainly the Nvidia GeForce driver), it works like a dream.

One more thing that's worth noting is that while the one I reviewed has 16GB of RAM, you can buy one with 32GB of RAM, something that many other laptops just don't offer.

As usual, I used PCMark 8 for benchmarks, to run three tests: Home, Creative, and Work. First up is Home, which checks on things like web browsing, video chat, and other general tasks.

As you can see, the XPS 15 scored better than 51% of other devices, falling short of gaming PCs and 4K gaming PCs. That's not bad, although it's really not as good as I'd have hoped for with the power that's under the hood of this machine.

Next up is the Creative test, which checks things like advanced photo editing, video editing, and more.

The results of the Creative test are more around what I would expect for such a device, especially given the powerful GPU. Finally, the Work test checks up on things like writing, spreadsheets, and video chat.

The results of the Work test are the same as the Home test, which is just fine.

As you can probably imagine, a lot of people ask me what kind of laptop they should buy. I respond by asking what they'll be using it for and how much they want to spend. The answer is always, "Just for Facebook and checking email, and I don't want to spend more than $400." To be clear, the "$400" is being extremely generous, as many people will aim more for $200. 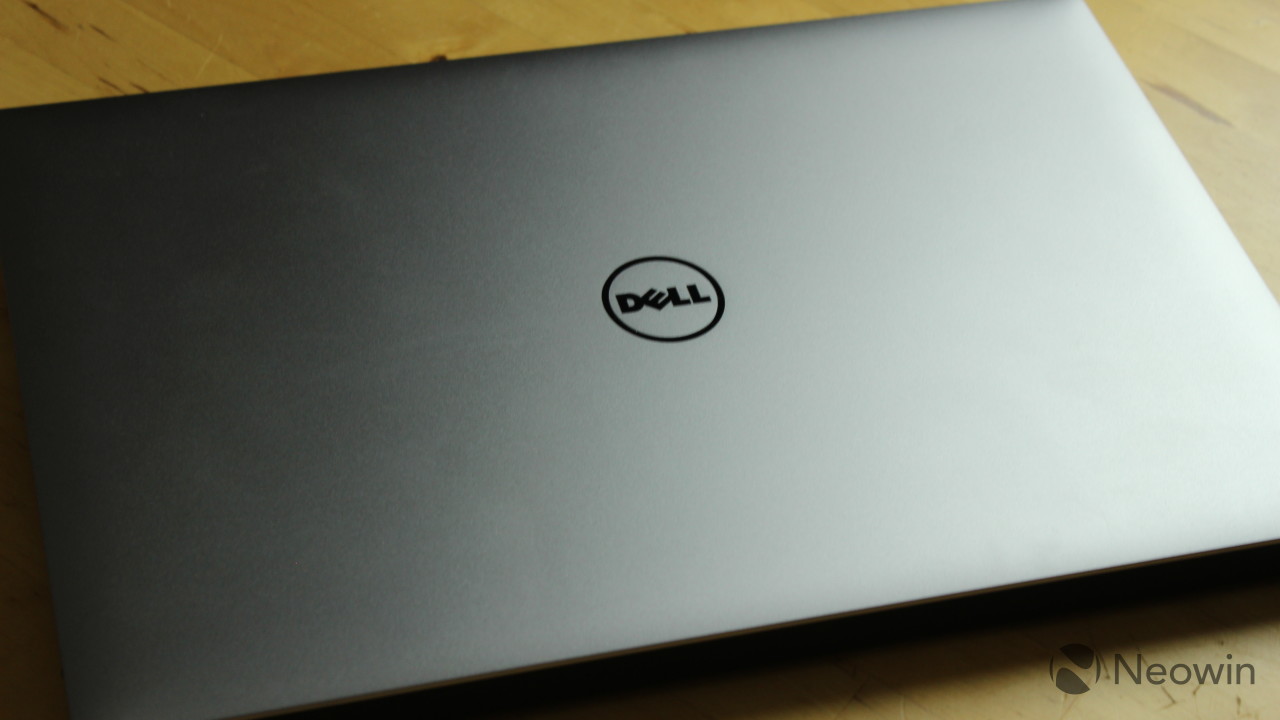 A few months later, they come back to me and complain about their new machine and how it sucks. I then try to avoid saying "I told you so", and give them some tips to speed up their PC.

The point is that people so often underestimate what they need from a PC in an effort to spend less money. And then they give their new $200 laptop to their kid, send them off to college, and they have to use something like Microsoft Access, Visual Studio, Adobe Photoshop, or some other application that requires a lot of resources.

That's why I love machines like the Dell XPS 15, because you're generally future-proofed. Whatever task you're going to try to do, it can do it for you.

Whether it's casual gaming, video editing, photo editing, web browsing, programming, database management, or just about anything else, you're good to go with the XPS 15. It comes in a portable package too, at just 4.5 pounds, so it's easy to carry around.

I don't want to imply that the XPS 15 is for everyone. There's no pen support, not that you'd need it without a convertible form factor, but if you're the type that would benefit from a convertible, you should look elsewhere, such as at Microsoft's new Surface Book 2.

And if you don't need seventh-generation processors or quite as much GPU power, Microsoft is actually selling the sixth-generation model with 32GB RAM and 1TB SSD for $1,899, or $1,000 off of its normal price.

Ultimately, I think that the mass majority of users would be very happy with a Dell XPS 15. It offers a high-power quad-core CPU, a powerful Nvidia GeForce GTX 1050 GPU, a 15.6-inch 4K display in the body of a machine with a 14-inch display, and it just feels pleasant to use. 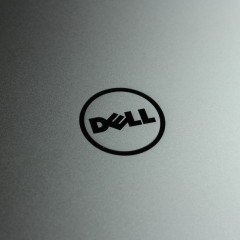 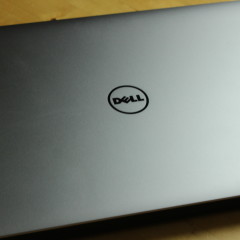 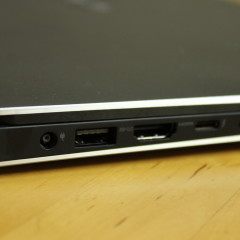 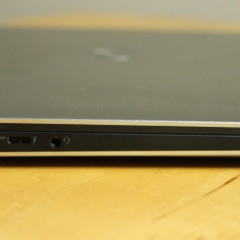 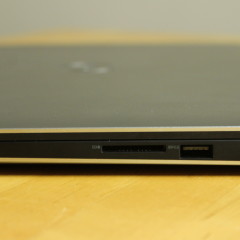 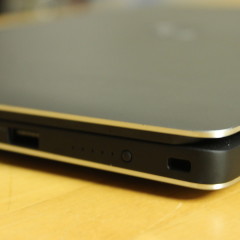 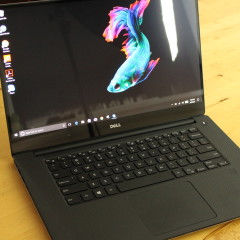 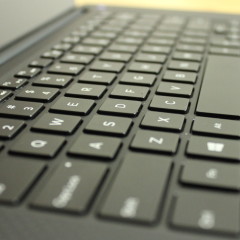 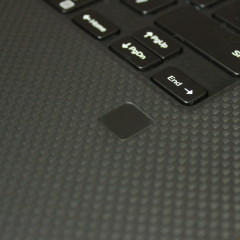 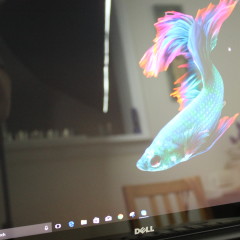