This week, Microsoft is hosting its Build 2017 developer conference in Seattle, where it's already made a wide range of announcements - from 500 million Windows 10 devices, to Visual Studio for Mac general availability, the public preview of Cortana Skills Kit, a range of new Microsoft Graph capabilities, and the new Azure IoT Edge platform, among others.

But along with all the other big announcements in its day one keynote, Microsoft also showcased a remarkable experimental project led by one of its researchers, which began when she met a young woman affected by hand tremors caused by Parkinson's disease.

33-year-old graphics designer Emma Lawton said that by the time she was in her late 20s, her right arm began to have "a mind of its own". She was later diagnosed with Parkinson's disease, which had left her with severe hand tremors that not only eroded her ability to draw, but also stopped her from being able to even write her own name. 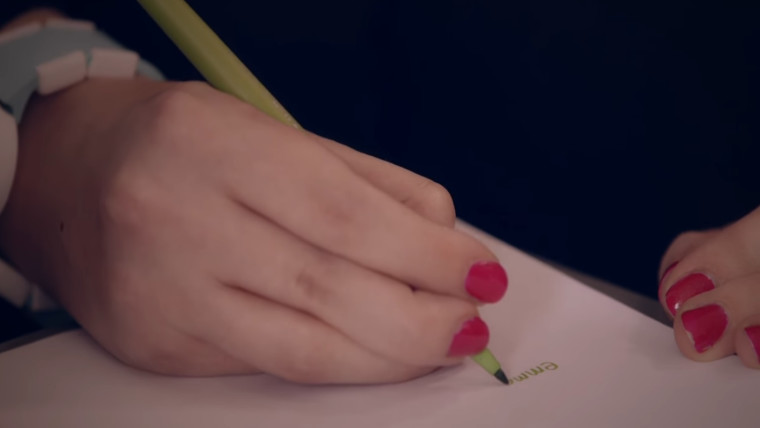 Lawton met Microsoft researcher Haiyan Zhang, who was inspired to draw on her technical expertise to consider ways of helping Lawton - and, potentially, millions of others like her. Zhang is the innovation director at Microsoft Research Cambridge, one of the company's most important research hubs. Microsoft said that Zhang's team is additionally "developing a project called Fizzyo, a connected device for kids with Cystic Fibrosis that turns their daily physiotherapy exercises into a video game experience. She’s also working with colleagues to develop Project Torino, a set of physical blocks that helps children with visual impairments learn computer programming."

Zhang spent months studying Parkinson's, and considering how technology could help Emma to manage the tremors, and give her the freedom to be able to write and draw again. Those efforts evolved into Microsoft Research's Project Emma, "exploring the use of sensors and artificial intelligence (AI) to detect and monitor the complex symptoms associated with the disorder – from body rigidity and gait slowness to falling and tremors".

Zhang created a prototype smartwatch, itself known as 'Emma'. The Emma Watch followed six months of research into the root cause of tremors, and the creation of many other prototypes. Microsoft said that "she sometimes worked in her London home, soldering wires to PC boards and tinkering with coin cell motors to create vibrations. She tested early versions with four other people with Parkinson’s, producing promising results for three, spurring the idea forward."

The Emma Watch vibrates with a particular rhythm, and has a specially designed companion app running on a Windows 10 tablet, that controls the pattern and speed of the vibrations. Microsoft explained:

In people with Parkinson’s, the brain fires off extra signals to muscles, creating a chaotic, internal feedback loop that causes muscles to essentially panic and perform many movements at once. That creates tremors. The vibrations from the watch seem to cause Lawton’s brain to focus on her right wrist, apparently reducing the brain’s messages to that spot.

“It’s like injecting white noise into that feedback loop in order to disrupt it,” Zhang said.

The watch enabled Emma to write her own name again - an extraordinary and emotional moment captured in Microsoft's video, shown below.

Microsoft is now exploring ways to "streamline and optimize the Emma Watch - and scale the technology", working in collaboration with a neuroscience team based in London, with the first wider-scale trials already being planned.

You can see the overview video that Microsoft showed in its keynote below...

...and the device was also featured by BBC Stories a few months ago: