The Human Media Lab based in Ontario’s Queen’s University has revealed the world-first holographic and bendable smartphone. The Canadian experimental laboratory will officially exhibit the HoloFlex during the Association for Computing Machinery’s Conference on Human Factors in Computing Systems (ACMCHI) in San Jose, California, on Monday, May 9.

The mobile device uses motion parallax and stereoscopy to create its 3-D effect without the need for auxiliary equipment. Not only can the phone be bent similar to the ReFlex smartphone, but it also includes a sensor which moves objects along the z-axis (or, in other words, towards and away from the user) as the phone bends. Users can also move the images vertically or horizontally by swiping the screen.

The HoloFlex employs a 1920x1080 HD Flexible Organic Light Emitting Diode (FOLED) touchscreen, 12-pixel wide circular blocks and over 16,000 individual fisheye lenses to render the holographic imagery visible. Therefore, a 160x104 resolution image is projected, which can be seen at virtually any angle. 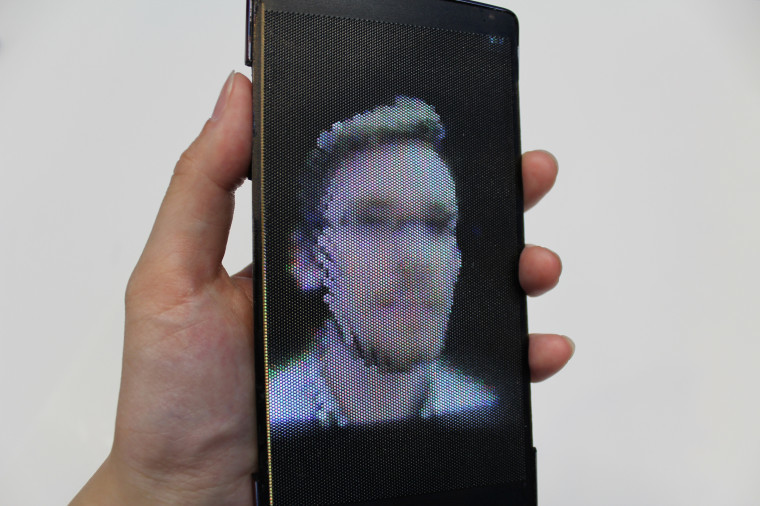 A professor of human-computer interaction (HCI) at Queen’s University, Dr. Roel Vertegaal says the technology could open up a new way of speaking to each other. “By employing a depth camera, users can perform holographic video conferences with one another. When bending the display users literally pop out of the screen and can even look around each other, with their faces rendered correctly from any angle to any onlooker.”

The HoloFlex is supplied with a 1.5 GHz Qualcomm Snapdragon 810 processor, 2 gigabytes of memory, and equipped with Android 5.1 and an Adreno 430 GPU with OpenGL 3.1.

The project was assisted by Immersion Canada Inc. and the Natural Sciences and Engineering Research Council of Canada (NSERC).