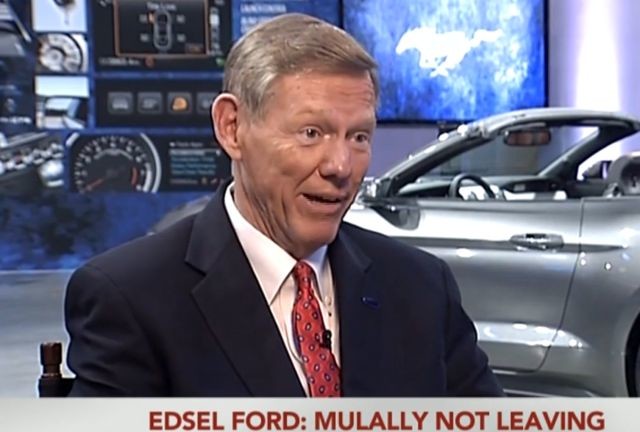 Microsoft may be trying to recruit current Ford CEO Alan Mulally to lead their company as the successor to the retiring Steve Ballmer, but Ford director Edsel Ford II says that Mulally has told the company's board that he plans to remain with the car maker for another year at least.

Bloomberg quotes Ford, who is also the great-grandson of company founder Henry Ford, as saying, "Frankly, he has told us that his plan is to stay with Ford through the end of 2014." Bloomberg also chatted with Mulally today, mostly on the topic of the new Ford Mustang. When asked if Ford's board was requesting him to renew his commitment to the company, Mulally stated, "I love serving Ford and there is no change to the plan." When asked what Microsoft should be looking for in a new CEO, Mulally completely dodged the question, saying he really wanted to talk about the new Mustang.

Mulally's name has repeatedly come up as a front-runner in Microsoft's CEO search for the past couple of months, even though Mulally has never publicly spoken about being in talks with the company for the top spot. Other unconfirmed reports suggest that Satya Nadella, the current executive vice-president of cloud and enterprise at Microsoft, could be chosen as its new CEO.

The search committee, which includes Microsoft chairman Bill Gates, reportedly wants to finish its job by the end of the year.