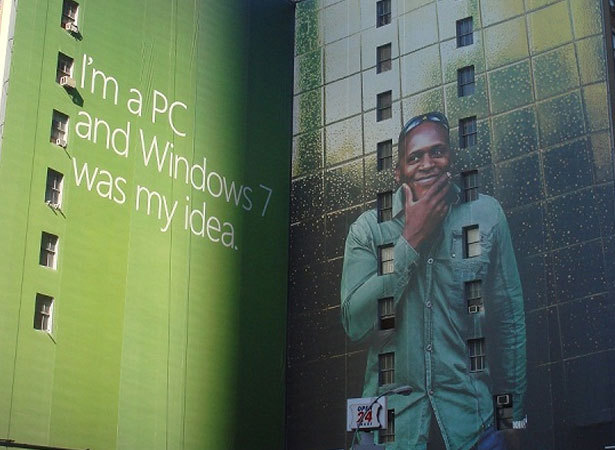 We all remember the "I'm a PC and Windows 7 was my idea" initiative from Microsoft, it was promoted extensively around the world. But what about Windows 8; is that really my idea?

From reviewing the past few screenshot leaks and blog posts from the Building Windows 8 blog, I'm not so sure. As of yet there hasn't been an announcement by Steve Sinofsky on the removal of the start orb. Other recent posts like power management are encouraging, even if they appear to favour handheld devices such as tablets over a traditional PC. I also haven't seen any evidence on how the desktop experience has been improved over Windows 7, aside from the addition of a ribbon and, again, wonderful for touch input, the dragging of folders to a location in the address bar in Explorer. If only that was in Windows 7!

Let's also not forget dragging Metro apps down to the bottom of the screen is also great for tablets, but what about closing them on a desktop with the traditional close button? Whoop, no Start orb for you!

The Metro user interface is obviously geared toward touch screens and devices with limited screen space, a concept that works very well on Windows Phone 7 due to the screen size. But when it comes to traditional desktops with screens in excess of 21" and in many cases multiple displays, all we're going to see here is a massive grid of applications on what used to be the Windows Desktop; and now the start orb has been removed in favour of some pop out that is obviously designed for finger pointing.

Good for touch devices, not so for traditional PCs.

Yes, we know we can switch back to the desktop and that it'll be the hub for traditional tasks such as file management and legacy applications; I say legacy because from what I can see, legacy apps will probably all end up as Metro apps that can be launched from the Start Panel, and eventually the desktop will not be needed at all, just like on a Windows Phone.

I like having a taskbar that shows the applications that are currently running complemented with the notifications area, and the management tools that go with it. I also like feeling that the Desktop is "home" or the Start Screen if you will.

Back when Windows 7 was in testing, I asked why the "Superbar" wouldn't be extended to a second or 3rd screen (there is a shareware app or alternatives that do this well), and the response from Microsoft was that users would get confused with the taskbar being on more than one screen. It could have been a power user option, but no.

Now with Metro, the grid spans as many screens as you have: Happy hunting for that app in a year's time when your grid goes on forever! And moreso, on a laptop with a small screen without touch capability. Good luck using the Metro Start Panel unless you know what you're searching for.

To me, Microsoft should have designed a SKU specifically for touch devices and tablets, and a version for the traditional desktop that can possibly make use of the touch features with an add-on pack or simple change of "Windows Features" that can be turned on or off. Instead it feels like Microsoft is putting their eggs all in one basket, with the expectation that in maybe two or three years time everything will be "touch." Now where did I leave that app?

Now we appear to have stepped backward to a two dimensional design that allows you to scroll endlessly left and right if you have enough pinned on the Start Panel, really emulating the Windows 7 Phone.

A desktop as a giant Windows Phone, with features that are clearly there for touch input, on a desktop.

So is Windows 8 really my idea? From what I've seen so far, no. I guess we'll find out on February 29th, and I'm still willing to be proven wrong.

You can follow our latest Windows 8 news coverage here and also in our forums.