Lenovo's Yoga C930 is the successor to last year's Yoga 920 (there have been some branding changes), and as far as internals go, it's pretty much the same. It has the same Kaby Lake R processor options, up to a 4K display, far-field voice microphones, and so on.

But the changes this year are more in terms of hardware features. For example, the watchband hinge has been swapped out for a soundbar. With speakers in the hinge, it provides superb audio quality no matter what form factor you're using.

The C930 also takes a note (pun intended) from the ThinkPad Yoga lineup, with a pen that's stored inside of the device. There's a privacy guard built into the webcam as well, another feature that initially debuted on ThinkPads last year.

Before we go on, let's break down Lenovo's new branding. Previously, Yoga meant it was a convertible, Miix was for detachables, and IdeaPad was for clamshell laptops. This is not the case anymore. IdeaPad is now for mainstream, and Yoga now means premium. Both of them can come in any form factor.

Now, the numbers will have a letter by them. C means convertible, S is for a clamshell, and D will be for detachable. The Yoga C930 is the flagship consumer convertible PC.

Don't worry though, as it does get more confusing. Lenovo does its gaming Legion PCs completely differently, as the C in the Legion C730 means cube, and it's a desktop. But we won't go there for now.

As I mentioned earlier, this year's model is more about providing a better experience, rather than offering better specs. With the Yoga C930, there's better audio, video, and more. 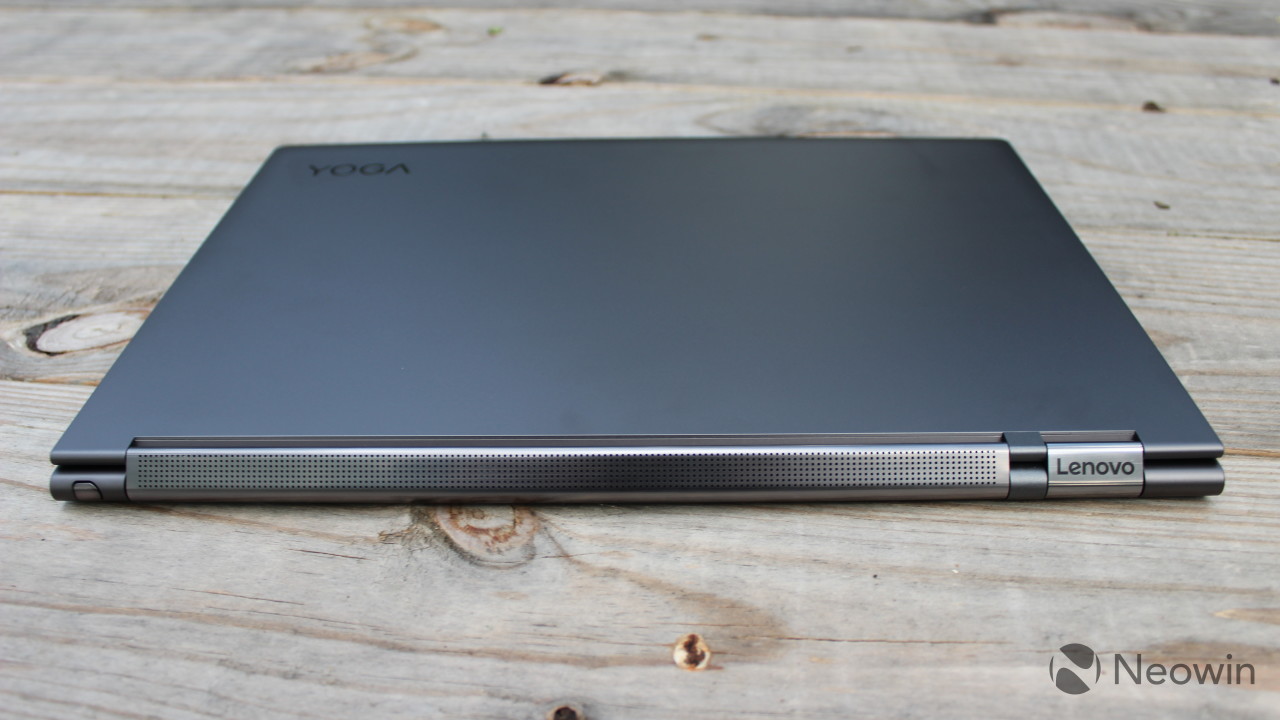 With the being said, the watchband hinge is gone. This has been replaced by a soundbar that can pump audio out of the front or the back of it. The benefits of this are that no matter what form factor you're using, you have a speaker that's firing in your general direction. 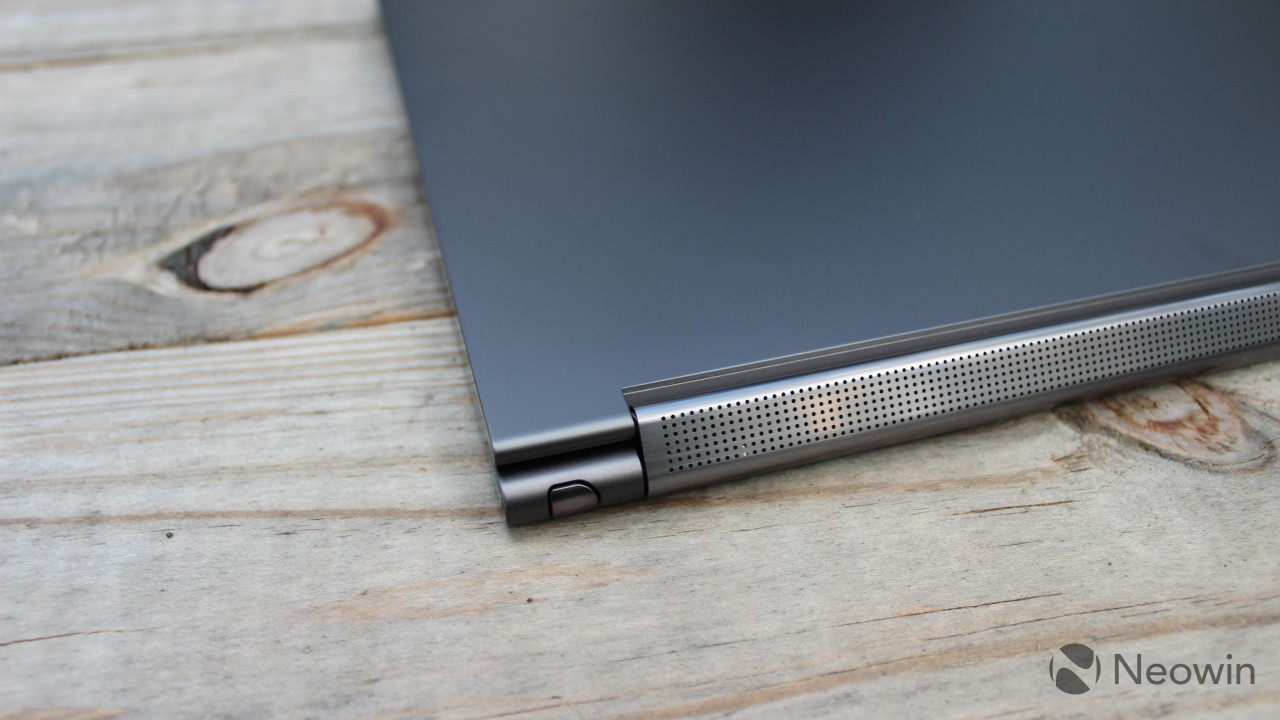 Right next to the soundbar on the back of the machine, you'll find a pen that can be ejected by pushing it in. The idea of storing the pen inside of the device is a feature that Lenovo first used in its ThinkPad Yoga devices, and I'm really happy that the firm is bringing these features to its consumer devices.

And that brings us to the keyboard, because that's one feature that hasn't been adopted. ThinkPads have this feature where the keys retract and become flush with the palm rest when you fold the display back, but that remains exclusive to ThinkPads, no matter how much I beg Lenovo to bring it to the consumer convertibles.

The keyboard is pretty standard for a consumer laptop, with Lenovo's rounded keys and a shallow key depth. There's a clickable trackpad below that and to the right, there's a fingerprint sensor. Sadly, it's only a fingerprint reader for Windows Hello, and there's no IR camera for facial recognition.

There is, however, a privacy guard in the camera. Also first debuted on ThinkPads, this provides a switch that blocks the camera, so you don't have to worry about putting tape on it. The camera is still above the display, so the top bezel is a bit larger than the ones on the sides.

The port selection hasn't changed. On the left side of the device, you'll find a USB 3.1 Gen 1 Type-A port, along with two Thunderbolt 3 ports and a 3.5mm combo audio jack. On the right side, there's only the power button. 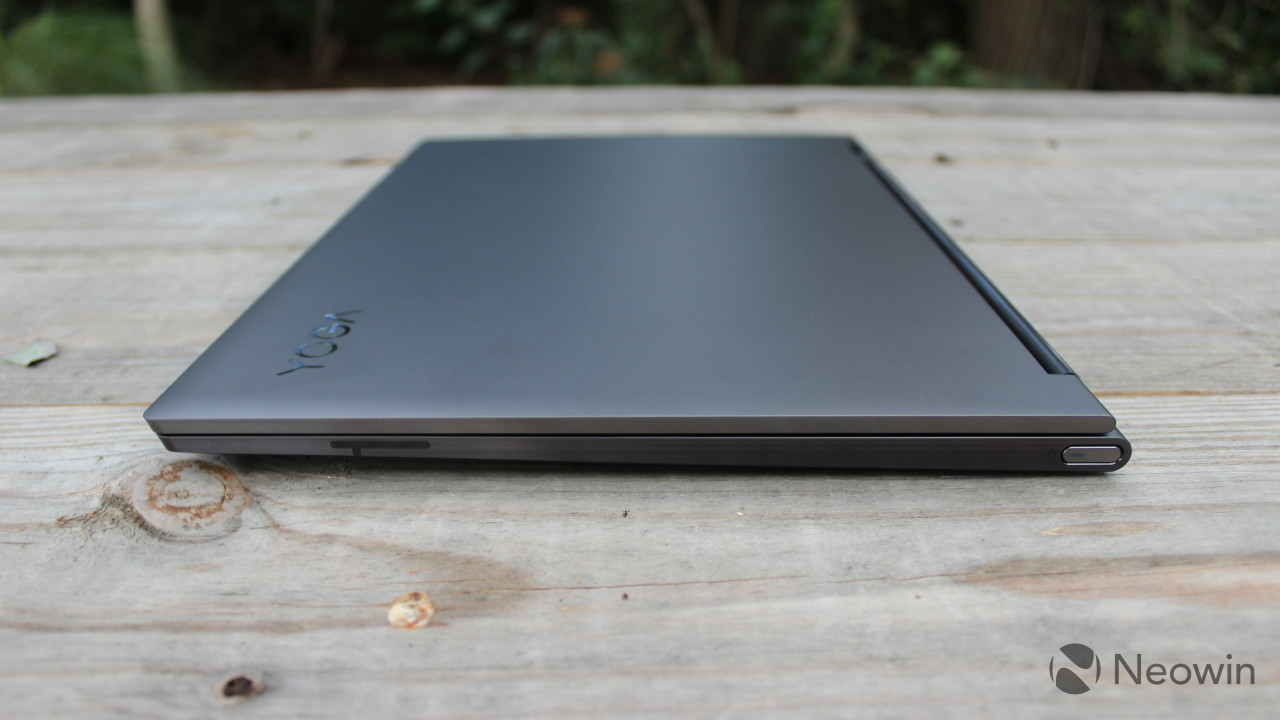 The Yoga C930 is made out of aluminum, and the Iron Grey finish looks nice. As usual, there's the lone Yoga logo on the laptop lid. 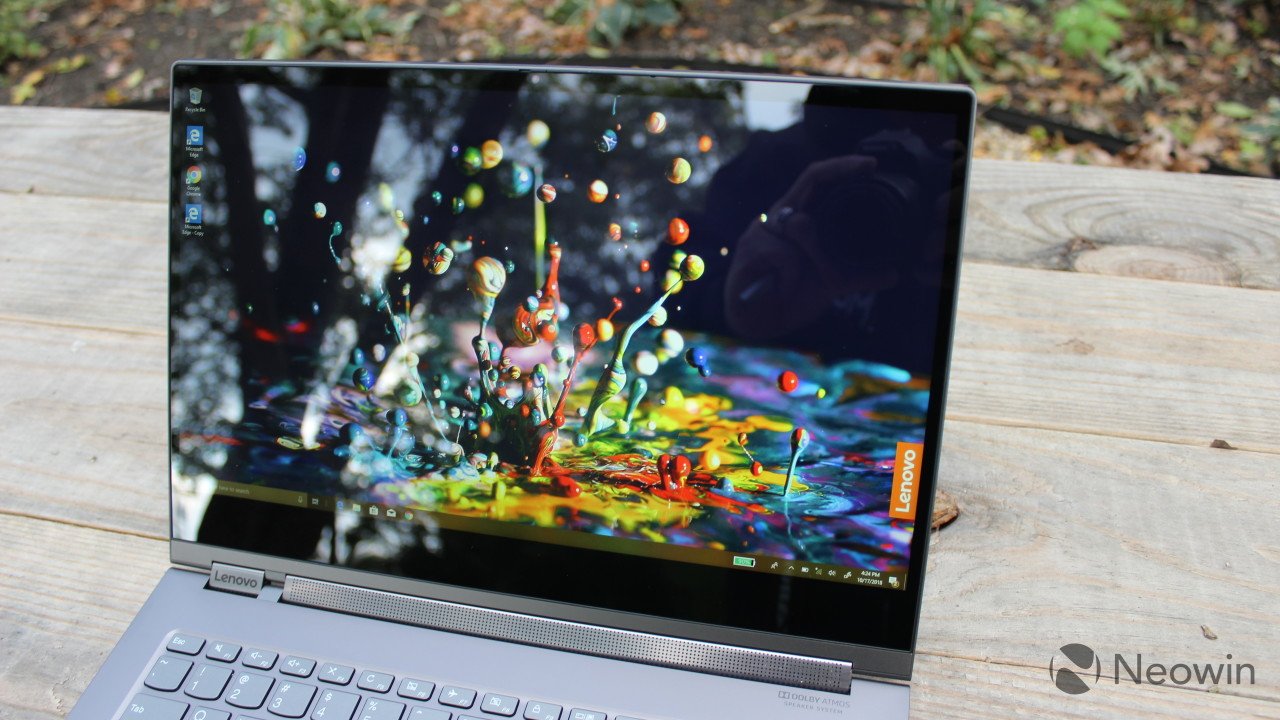 Dolby Vision is an HDR format that changes the color profile of a video that you're watching dynamically, while standard HDR is static throughout the video. The feature is more common on higher resolution displays, so it's nice to see it on 1080p. 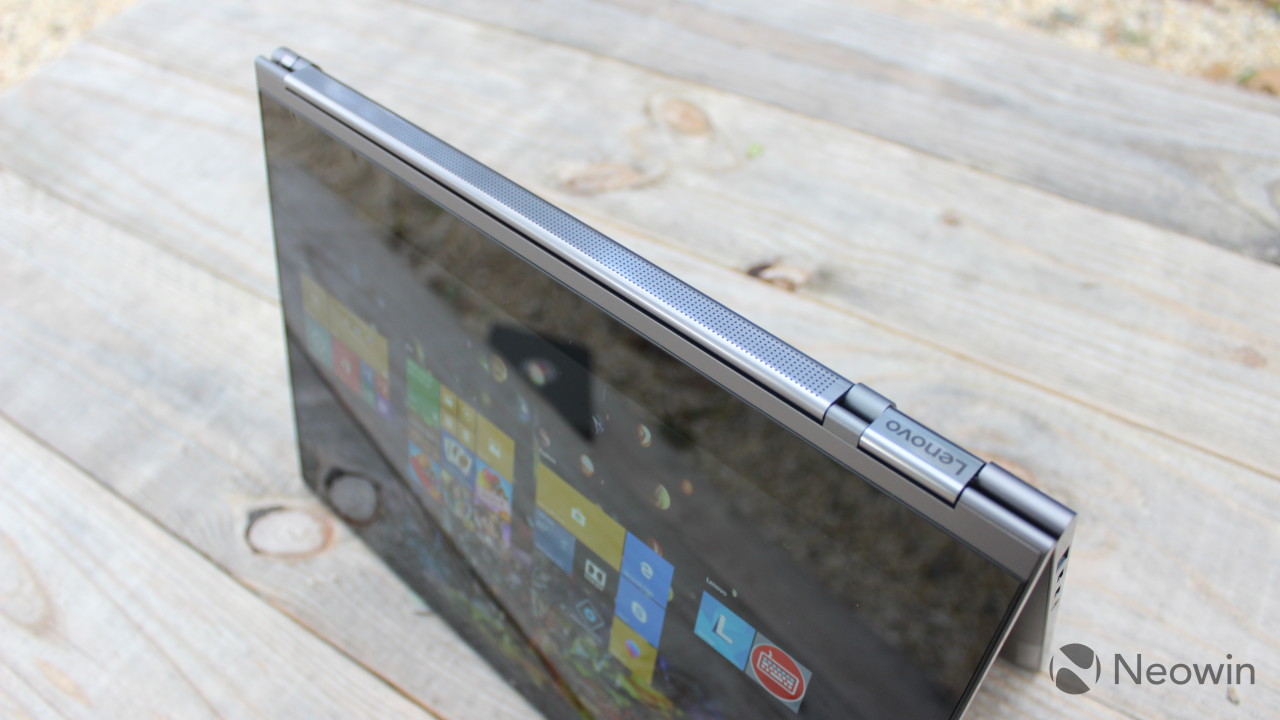 And here's what I really love about the Yoga C930: the immersive media experience. There's plenty of HDR content available on Netflix, let alone things you can buy from various sources like the Microsoft Store, Amazon, etc. On top of the stunning visuals, the audio quality is amazing. The Dolby Atmos soundbar is loud and it's clear, to where you can walk into another room and still hear everything perfectly. 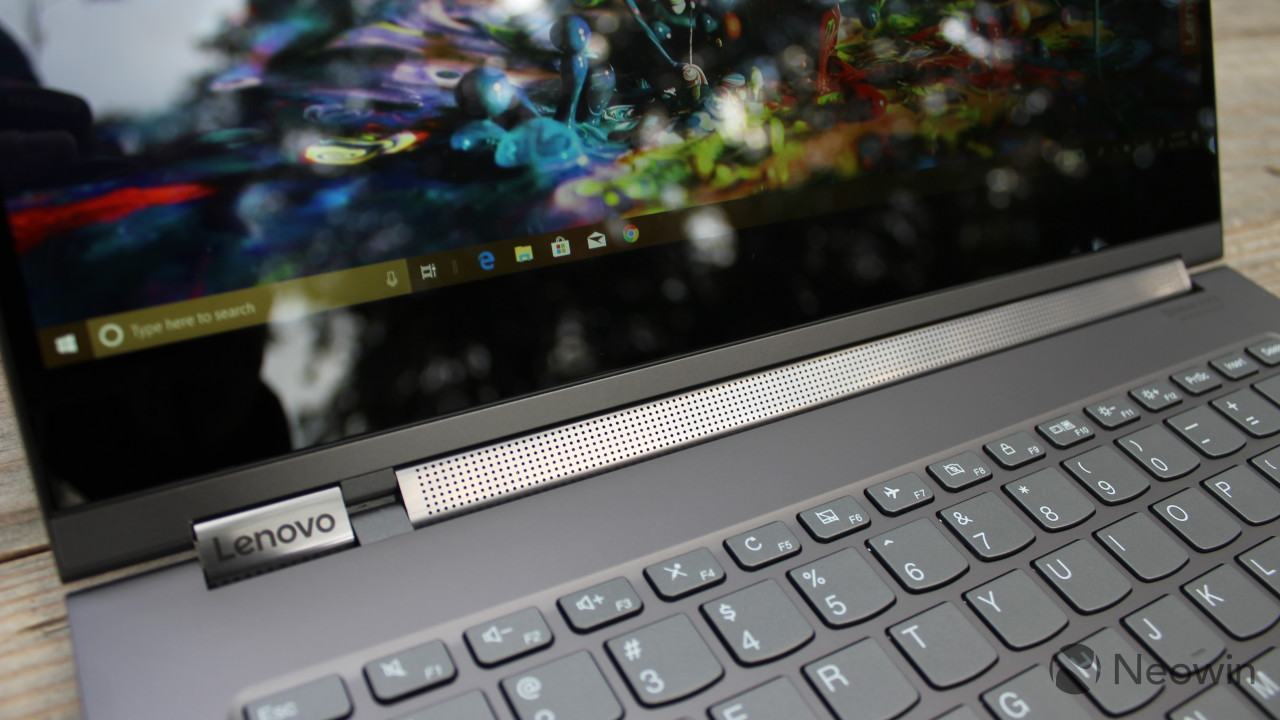 This is a trend that I just love on laptops, especially convertibles. You can fold the display back and use it as a tablet, and you might want to watch a movie that way. Or, you can prop it up in tent mode. When you do this, it's an incredible and immersive experience. Also, even if you're just listening to music while you work, it sounds great.

If you're choosing, you'll probably be tempted to go for 4K, and that's definitely the better visual experience. Remember though, the higher resolution will certainly affect your battery life.

As far as the keyboard and the trackpad are concerned, nothing has really changed. If you've used Lenovo's recent consumer laptops, then you know what to expect here.

The keys have a fairly shallow key travel, much shallower than a ThinkPad. Still, it's very comfortable to use, and the keyboard is precise. I don't find myself with the mistakes that I get from lesser keyboards. Naturally, it uses the rounded keys that Lenovo has become known for. 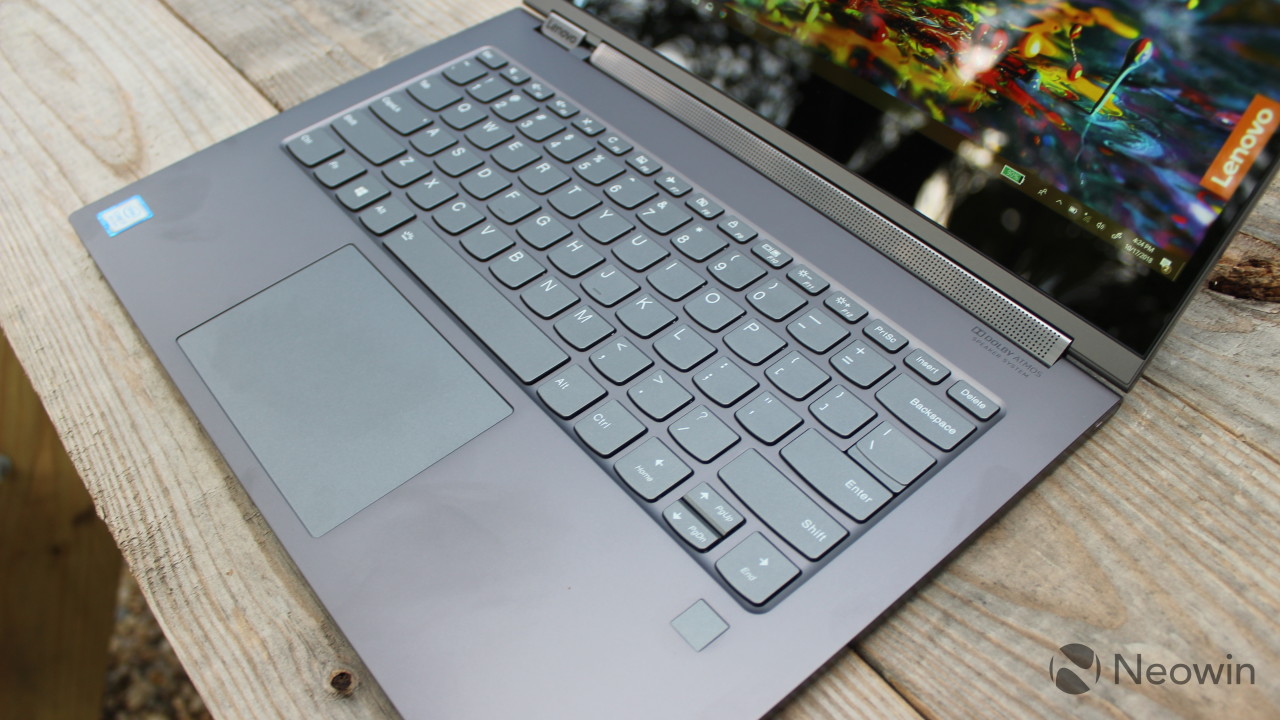 The trackpad is clickable, which is nice, considering that there are no physical buttons. It's made of glass, which is pretty standard these days on Windows laptops. Believe me, it wasn't always this good.

As someone that writes articles for a living, the keyboard is the most important feature on a laptop for me, and the Yoga C930 certainly passes the test. It's a very comfortable machine to type on, and that's almost always the case with Lenovo devices, in my experience.

I absolutely love that the pen is stored inside of the device. Pen storage has been thought of in different ways by different companies. For example, Microsoft uses a magnet for the Surface Pro, as do companies like Apple with the iPad Pro and Samsung with the Galaxy Book 2. With last year's Yoga 920, the pen was stored in a holster that plugged into the lone USB Type-A port. Unfortunately, with magnets, the pen can fall off in your bag, and with a holster that uses a USB Type-A port, it uses a USB Type-A port.

That's why I like it when it's stored inside of the device. No matter what, the pen is with me, and it's always charging. I'm not exactly a power pen user, so it's not something that I'd opt to bring with me. It's just nice that when I do use it, it's there. 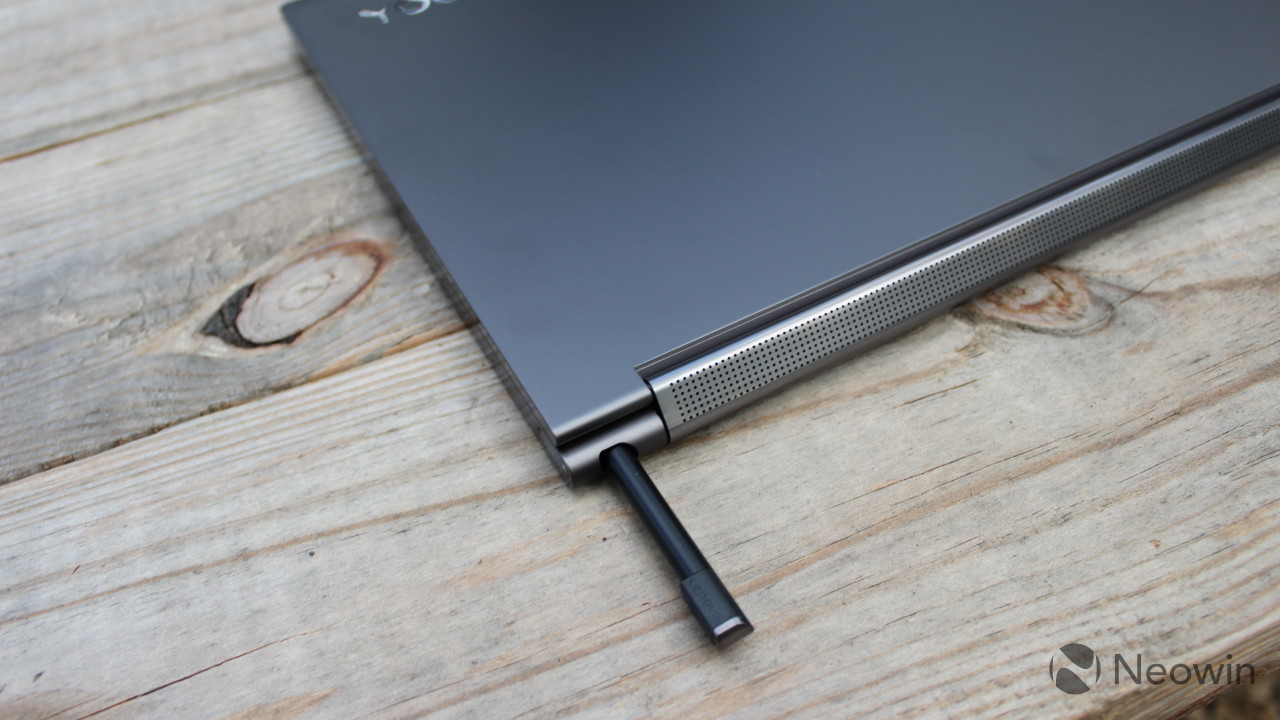 There's one downside though, which is that the pen is smaller. If you are a power pen user, you might want a larger pen, and the good news is that there are plenty of third-party pens that will work with this device.

Personally, I like to use pens for taking handwritten notes in OneNote. I can just pop the pen out, flip the screen back, and start writing on the PC that I just converted into a tablet.

But Windows Ink has many uses, and while Windows 10 on tablets is lacking in many ways, inking is not one of them. You can write on photos in the Photos app, draw routes in Maps, mark up PDFs in Edge, and more. Remember the old days when someone sent you a file to sign and you had to print it, sign it, and scan it back again, like a barbarian? Those days are over. Just open the file and write on the screen.

I just wanted to call attention to the fingerprint sensor, because I really wish that there was an IR camera for facial recognition. To me, it's just natural to sit in front of a PC and have it recognize me. 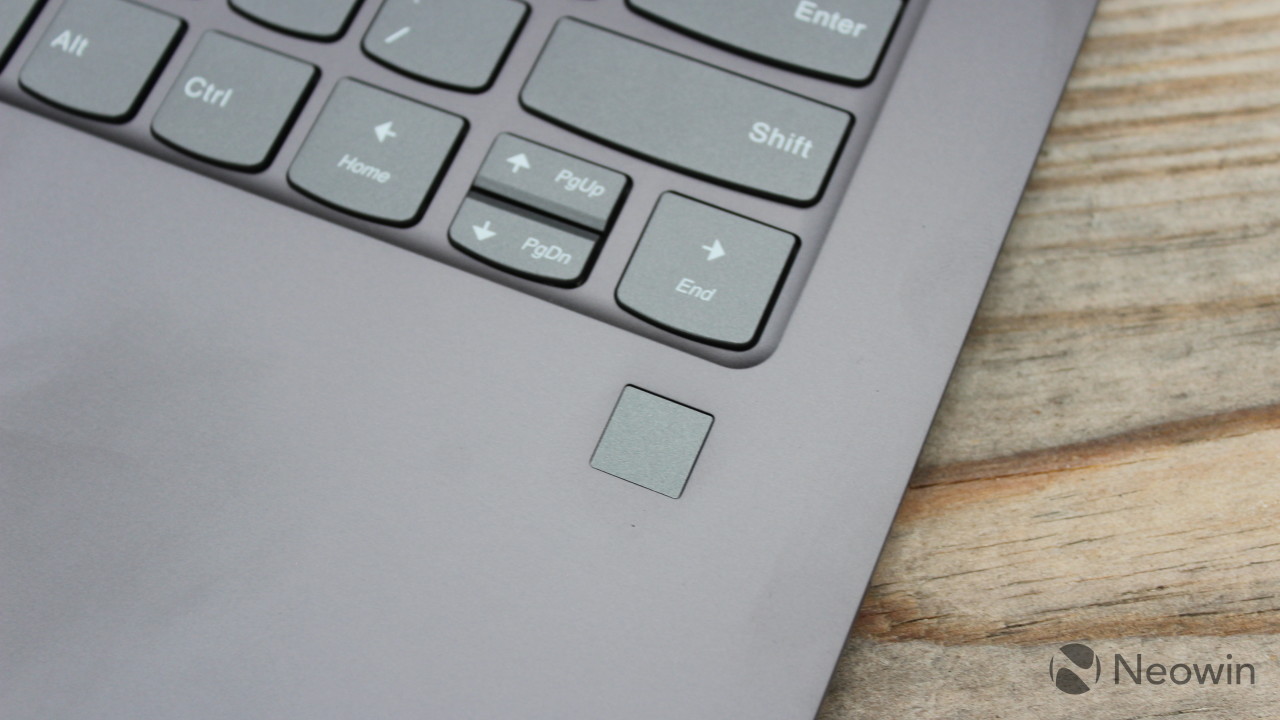 Unfortunately, Lenovo still hasn't worked out using both the privacy guard on the camera and an IR camera. In fact, the firm really hasn't used IR cameras at all until this year, so when it introduced them on ThinkPads, users had to choose between facial recognition and the ThinkShutter privacy guard.

The fingerprint sensor is OK, not great. While it's not my preferred method of biometric authentication, I won't dwell on it. After all, you're still only going to log onto the device once per session, so entering a PIN or password still isn't that much of a hassle.

The Lenovo Yoga C930 includes a Core i7-8550U processor, or on the lower end, a Core i5-8250U. This is a bit disappointing to me, since it's the same selection as with the Yoga 920, despite Intel announcing its new Whiskey Lake chips. Whiskey Lake is also a lineup of 15W U-series chips, just like the older Kaby Lake R CPUs that are used here. You can think of them as second-generation eighth-generation processors. Still, don't be surprised if you see a mid-stream refresh like we saw with the Yoga 910.

When I reviewed the Yoga 920 last year, I thought the performance was great, so naturally, that hasn't changed. The Yoga 920 I reviewed was the 4K model, so there should be increased graphics performance on the 1080p model, due to the lesser demand by the display.

The quad-core processor can handle any productivity task you put in front of it. Remember, up until Kaby Lake R was introduced, U-series processors were dual-core, so just about all productivity software is optimized for lesser hardware than this. You can also use it for some light gaming at 1080p, although I wouldn't go beyond that and performance will start to lag if you start plugging in external monitors.

For benchmarks, I used PCMark 8, which provides three tests: Home, Creative, and Work. First up is home, which tests the most common tasks, like video chat, web browsing, and so on.

The score is a little bit better than last year when the Yoga 920 got a 2,991. Presumably, this is the result of a year's worth of refinements to the chipset firmware. Next up is the Creative test, which checks more GPU-intensive things like gaming, video editing, and so on.

This is also pretty standard for this chipset, and it's once again slightly higher than last year's Yoga 920, which scored 3,495. Next up is the Work test, which focuses on productivity-related tasks like writing and spreadsheets.

If you're looking for a new PC and you're OK with spending around $1,500, look no further than the Lenovo Yoga C930. Not only is it nearly perfect, but it's an amazing value for the price.

The performance is there, even if I complain about Lenovo's choice in processors. It's a productivity powerhouse, and you can do some heavier tasks like photo editing and casual gaming. You can go even heavier in a pinch. 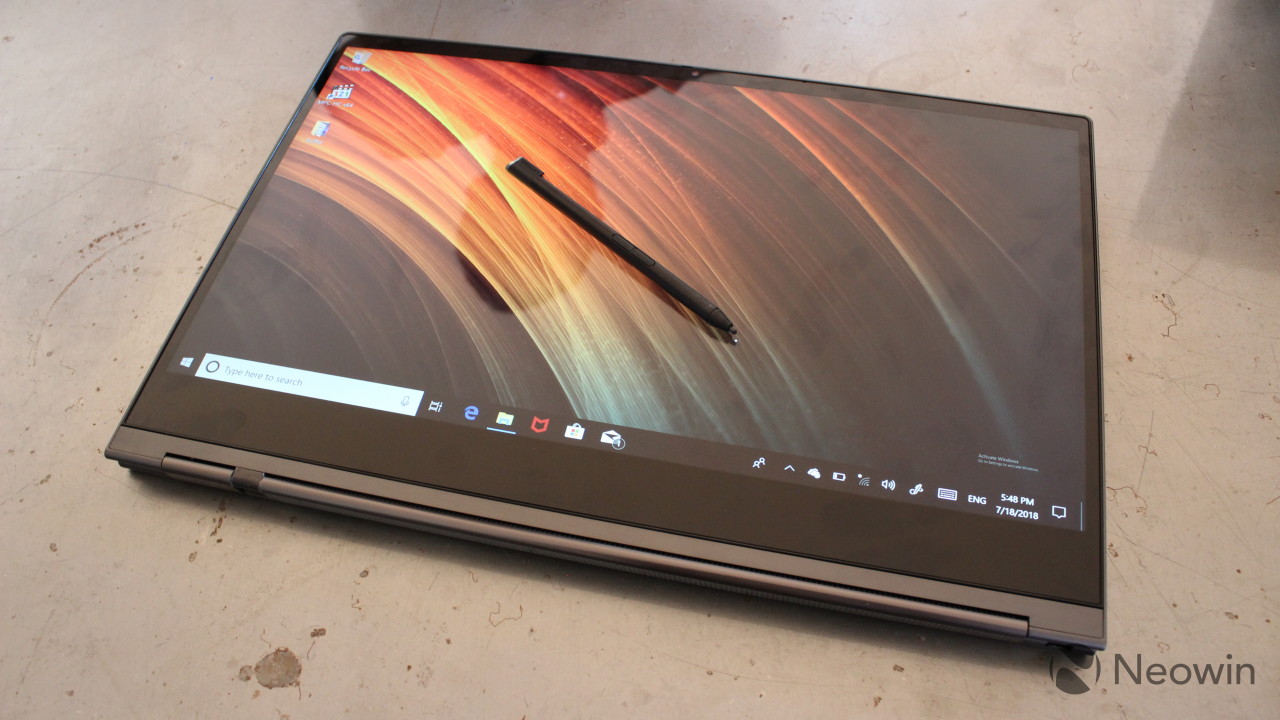 On top of the power, the pen is built into the device, another thing that boosts productivity. You don't have to go looking for it in your bag, or have it take up external space.

But it's also an immersive media experience, so when you're not working, you can play. The Dolby Vision HDR is beautiful, and the display has narrow bezels. But most importantly, the rotating Dolby Atmos soundbar is one of the best audio experiences that you'll find on a mobile PC. 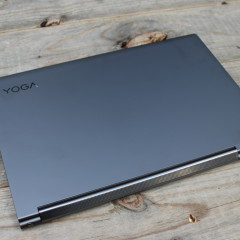 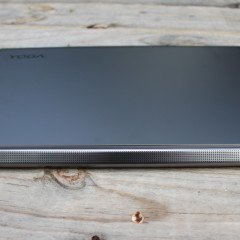 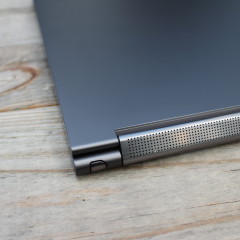 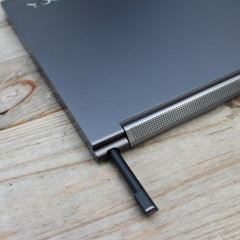 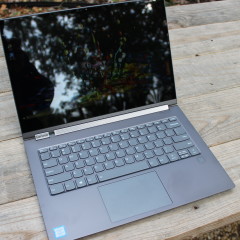 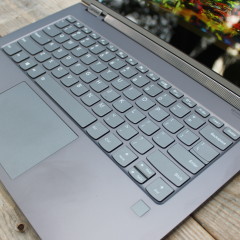 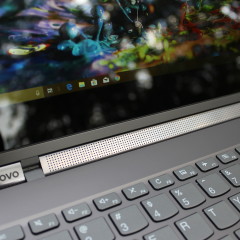 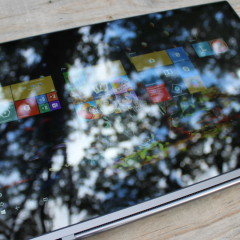 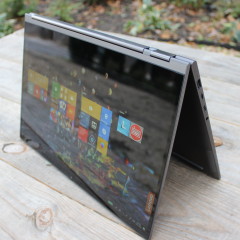 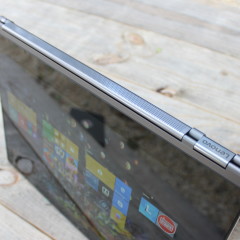 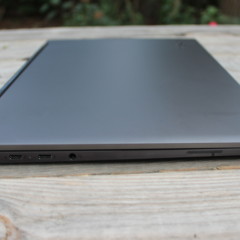 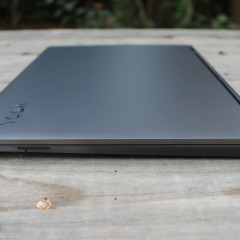 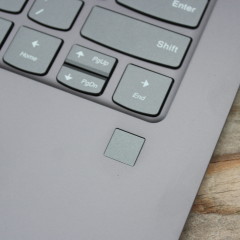 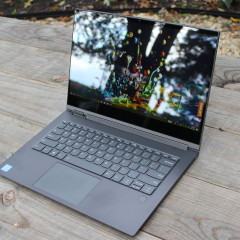