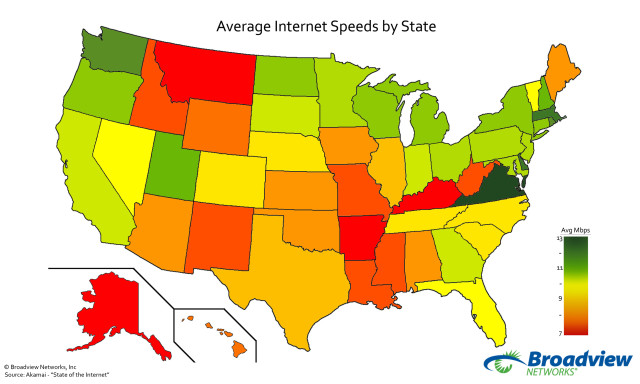 A heatmap reveals the varied speeds of the 50 states.

A fast and reliable internet connection is essential for any tech corporation to prosper. Judging by the latest results, it turns out Microsoft’s decision to relocate their headquarters to Washington in 1986 has paid dividends for the company. The latest study reveals the state outperforms California, New York and Florida in the realm of average internet speeds.

Research conducted by Akamai reveals the average internet speeds across 50 states. Virginia took the top spot, recording an average of 13.7 Mbps, despite seeing a 4.3% decline from the fourth quarter of 2013. Delaware, Massachusetts and Rhode Island also made the top four. Microsoft’s home state Washington came in at 6th at 12.5 Mbps, up 8.5% from 2013. A generous peak of 50.2 Mbps could give them a slight advantage over other companies located in other parts of the nation.

Surprisingly, California placed 20th on the list, registering an average of 10.9 Mbps. This means companies in Silicon Valley, which include Google, Apple, Facebook and Cisco, may not have access to the nation's fastest internet. This places the Sunshine State below Utah, Wisconsin and North Dakota.

Larger and more sparsely populated states, such as Alaska, Arkansas and Kentucky saw the lowest scores, recording around 7 Mbps respectively.

If current trends continue, the State of Washington may lose its top 10 spot, allowing other states and their corporations to claim bragging rights over the fastest internet speeds.