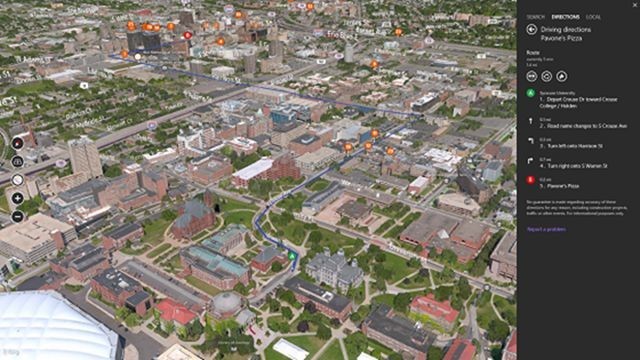 Earlier this month, Microsoft released a Bing Maps preview edition for Windows 8.1 users, adding in features such as full 3D photographic maps for 70 cities around the world and more. Now a recent post hints at even more changes in the works for future Bing Maps updates.

The blog buries the information near the end of the post, which is mostly a flashback to all of the changes and additions that Microsoft has made to Bing in the past 12 months. That included adding more information about people, places and things that can be accessed from the Snapshot database. Microsoft says that kind of access could be visible inside its maps at some point:

Moving into the future, entity knowledge will greatly enhance our mapping experiences. While our Bing Maps Preview app already takes advantage of Satori to deliver smart features like Local Scout, we have a vision for maps where everything is annotated with useful information: what buildings are called, what stores are in them, how to get in touch with those stores and when they are open. Much of this exists today in our current experiences, but further integrating entity knowledge into maps will transform digital maps from the visual representation they are today to a deep model of what the world is like.

That kind of plan is highly ambitious and it doesn't sound like it's going to be added to the service in the near future. However, it's clear that we will see a merger of more search features inside Bing Maps in the coming months and years. Indeed, the end of the blog post has Microsoft stating, "Moving forward, you will see us mapping more of everything – both the web and the real world."