You know things are bad over in the Windows Phone camp when an operating system that almost no-one talks about is beating Microsoft’s latest and greatest. Yep, according to the latest reports from research firm Gartner, Samsung’s seldom-used Bada OS is actually beating Windows Phone in worldwide smartphone sales. Just take a look at the chart below: 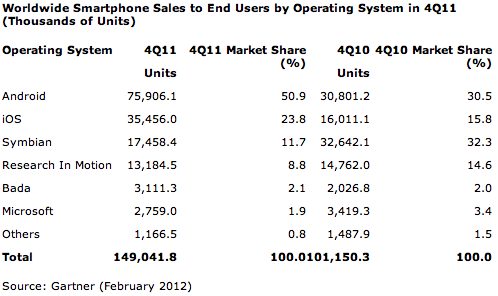 Gartner is reporting that Windows Phone had a worldwide smartphone sales total of 2.759 million units in Q4 2011, while Bada had a sales total of 3.111 million units. This does indeed equate to the latter operating system beating Microsoft’s by a grand total of 352,000 units for the previous quarter. This must surely hurt Microsoft considering all the effort they went to, along with Nokia, to promote their operating system on Nokia’s Lumia range.

As you will also notice from the chart above, Microsoft’s smartphone market share has decreased year-on-year from 3.4% to 1.9% while Bada actually grew by 0.1%. Despite Microsoft’s market share loss they actually only sold 650,000 fewer units year-on-year, which isn’t all that much less considering giants like Android occupy 75 million units with an increase of 45 million year-on-year.

Another thing to remember is that in 2010 many people were still rocking Windows Mobile devices, and between now and then they have likely ditched these old devices for a newer smartphone that runs a more established OS such as iOS or Android.

As the 2011 numbers have likely scraped away most of the Windows Mobile figures and reflect almost solely Windows Phone, from here on out there is only going to be growth for the Windows Phone platform. Gartner predicts that by the end of 2012 Windows Phone will grow to reach 8.6% market share, helped along by multiple OS updates (“Tango” and “Apollo”) and new devices such as the top-tier Lumia 900.

One would have hoped that by now Windows Phone would be occupying a larger share of the market, but hey, Android started out in relatively similar rocky waters and look where it is now.