The graphics card market has experienced some amazing turns lately even though AMD and Nvidia haven't made serious architectural changes in 2013. Most recent GPUs have been rebadges, while a handful are just extensions of previous-gen technology, including the flagships from both camps. The R9 290X's Hawaii XT core boosted the performance of the HD 7970's Tahiti XT core around 38% with a memory bus that's 33% wider, while the GTX Titan is powered by a version of the GTX 680's GPU, except it's 90% bigger!

Having traded performance blows, both companies are tightening their pricing with the $400 R9 290 forcing the GTX 780 down to $500 from $650, further invalidating the GTX Titan, which is effectively history after the announcement of the GTX 780 Ti that we'll be testing today. 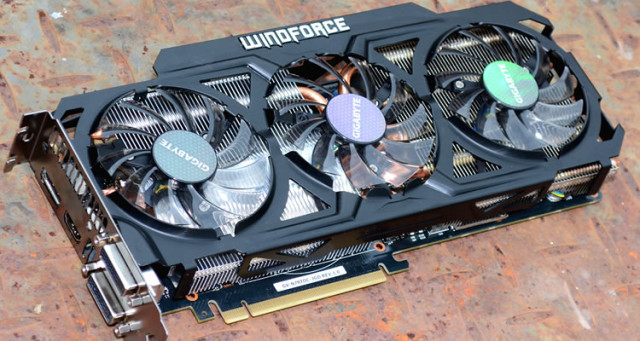 Gigabyte has armed its GTX 780 Ti with a massive air cooler that can handle 450W of heat, allowing the company to ship its variant of Nvidia's newcomer with a 17% overclock. The company has also been working on other overclocked GTX 780s, including a "GHz Edition" (not official Nvidia nomenclature) that features the same 450W cooler, allowing a core clock of 1.02GHz or 18% higher than the standard version of the card.