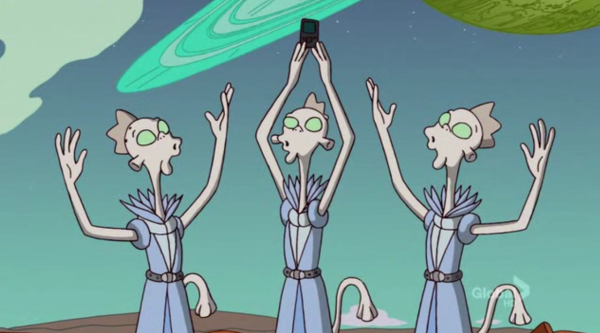 During its annual "Treehouse of Horror" episode last night, The Simpsons took an opportunity to poke fun at Microsoft's most disparaged product, the Zune.

In the episode, which is not currently available online, a black hole had formed in the Simpsons household, and the family had chosen to get rid of its garbage by throwing it in the black hole. The black hole continued to grow until all the residents of Springfield were sucked in, where they were then met by aliens on another planet.

At the end of the episode, the aliens stated the garbage deposited by the Simpsons and other Springfield residents had become favorites on their planet. A banana peel, for instance, was a delicacy. The aliens then said "the most incredible device ever made" was the Zune and began chanting the product's name.

Last night's episode is perhaps a good example of why Microsoft has chosen to kill the Zune brand and replace it with Xbox Music. Despite being well-received by critics, Microsoft's portable music players were unable to gain a foothold with consumers, as they were considered to be iPod knockoffs.

Episodes of The Simpsons are not available on Hulu until eight days after viewing.