It's been nearly two weeks since the last Windows 10 Insider Preview, which was build 18334. Microsoft released build 18342 to the Fast ring today though, and it builds on top of features that were introduced in build 18334.

The features, however, are quite mysterious. Microsoft only describes them as "gaming improvements", offering a chance to play State of Decay for free. While the game arrives via the Microsoft Store, State of Decay was never offered through the Store, so it's likely that the company is testing deployment of Win32 games through the Store that you'd normally get through a vendor like Steam.

The other part of the new features has to do with the Windows Subsystem for Linux. You can now access your Linux files from within Windows 10, and this feature was first introduced in last week's 20H1 build.

Thanks to everyone who signed up to try out our new Windows gaming technology in Build 18334. With today’s new build (Build 18342), we have some fixes that we can’t wait to have folks try out: the game now runs correctly with parental controls enabled, and the install process is more stable (including a fix for the game being stuck in “Pending” instead of downloading).

If you see any problems downloading or installing the game, or if important functionality like game saving isn’t working, please be sure to use the Feedback Hub to tell us. And thank you again for helping us find any issues!

Linux Files inside of File Explorer

We added the ability for users to access Linux files in a WSL distro from Windows. These files can be accessed through the command line, and also Windows apps, like File Explorer, VSCode, etc. can interact with these files. Access your files by navigating to \\wsl$\<distro_name>, or see a list of running distributions by navigating to \\wsl$. You can learn more about this here. 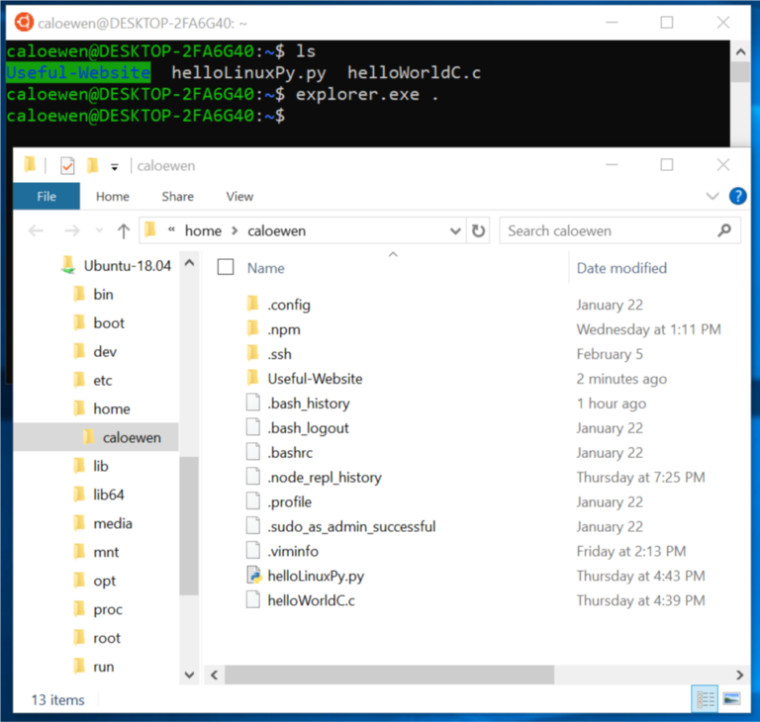 New Chrome Extension for Timeline: We’re pleased to announce an extension that collects activities from your Google Chrome browser and adds them to your Timeline in Windows. You can download the new Web Activity extension now from the Chrome Web Store. Just sign-in to the extension on your Chrome browser with your Microsoft account, visit a site in Chrome, then watch it appear on Timeline – and pick up where you left off. Your Chrome activities will also sync with Timeline on Android devices using the Microsoft Launcher app. Give the new extension a try and let us know what you think in the Feedback Hub. This is just one of many updates inspired by Insiders to make Timeline even better!

Obviously, this build is from the Windows 10 19H1 development branch, and the development of new features is winding down. The version number is 1903, meaning that we should see an RTM build in March, followed by a public release in April.