iPod touch cases are a dime a dozen these days, and it's no wonder; the metal backs of the things scratch more than a DJ in a record factory. Recently I had looked around for a better solution, but didn't want to settle for second best, and had discovered this: Shinnorie's GEN Label contoured nylon case. As the title may indicate, this review is for the iPod touch 2G device, but Shinnorie make these cases for the iPhone 3G and iPod Classic, also.

The GEN Label case series is quite an interesting one. Shinnorie allows you to customize the color and thread of the case, as well as the color of the front panel. I opted for a sleek black piece, with orange thread, shown below: 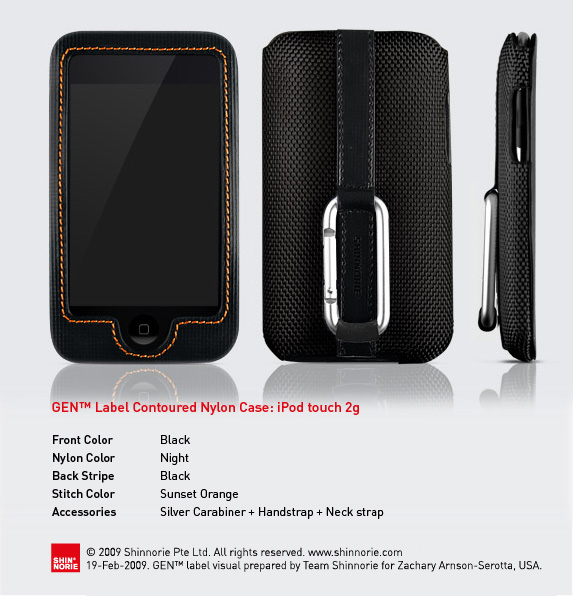 Of course, if you don't like that, Shinnorie has a range of colors on the customize page for the case, so feel free to browse. Without further ado, onto the review.

Packaging, and what's in the box:

Normally, I couldn't care less about the packaging of my case; after all, you'll probably never look at it again. I thought this deserved a mention because Shinnorie has really put in a nice bit of detail. The box is the same card as the box for the original iPod touch, and really feels high quality. It speaks for the quality of the case, and I liked that. So, what's in the box?

-- Shinnorie's GEN Label case, of course.
-- A screen protector, for the iPod. I'll discuss this a bit further down.
-- Two straps, one short and one long, to attach to the carabiner on the back of the case.
-- A cleaning cloth, so you don't get fibers stuck behind the screen protector.

Pretty standard stuff, really, but you can't expect much more. An issue I had with the screen protector was that it was about 1mm too big for the screen. I'm not sure if this was just a one off, but it was annoying none-the-less. Of course, those things are cheap and you can buy them from a lot of places, so it's not a big deal. Also, with the iPod in the case, it doesn't matter as the case will cover any excess screen cover.

Shinnorie's case is made out of nylon, and a bit of leather here and there, so it feels good to hold. It's also very well put together. I've used it for about a week straight now, over my clear silicone case, and so far it's been wonderful; I certainly don't miss the old case, and I can imagine using the nylon case for a very long time. There was one issue I had with quality, however, and that arose whilst putting my iPod into the case. There is a centimeter strip of material between the top of the hole for the volume button, to the top of the case; this strip immediately came slightly unstuck from the front panel, and if I pull on it slightly, I can see it becoming even more loose. It makes me slightly concerned, but fortunately Shinnorie covers all of their products with a 1 year warranty.

Another issue I had with the build quality was that the case could do with an extra millimeter or two in width; the left side of it bulged out a bit, due to it being such a tight fit, and as it was so tight, putting my iPod into the case left light scratches on the back. I wasn't too impressed to have the case scratch my iPod when it's supposed to protect it.

In general, Shinnorie's case is terrific to use. There's no problems with the headphone jack being slightly covered, nor the Sync port (I've had this problem before). I used it whilst walking to and from University, and it in no way annoyed me while changing songs, or anything else; it However, one slight problem I had was that the volume buttons are slightly hard to access; you've got to point your finger on them in order to press them, as opposed to just pressing them with your thumb as I was accustomed to. On the contrary, some people may find it easy, as a couple people who used the case said it was fine, but also some others said it was a bit hard to press the volume, so it's a mixed bag really.

The case does a great job of protecting the iPod. I've dropped it (accidentally) a couple times with the case on, with no ill effects. The case is very solid, and I imagine it would survive quite a high fall. I've put together a small gallery of my photos of the case, which you can find here.
(Note: I made them a small enough resolution to show up in the gallery without having to click the link, but it doesn't appear to be working for me. Strangely, in other galleries, images of larger sizes show up without having to click the link, so your mileage may vary.)

So, here's my ratings for the Shinnorie GEN Label iPod touch 2G case:

For those who don't want to read through all the review, here are my pros and cons for the case:

Pros:
1) High quality case, appears like it would last a very long time.
2) Customizable in color.
3) Comfortable to hold.

Cons:
1) The iPod 'bulges' out of the case.
2) Volume buttons are a bit hard to reach.
3) Causes light scratching on the back of the iPod when you put it into the case.

I think it's also worth noting that Shinnorie actually allows you to sketch your own case, and they will create a mock-up of it. This is probably the ultimate in customization, although I unfortunately have yet to check out this feature. So, do I recommend the case? Yes, I do. It's well put together, great to use, and while having a few minor issues, its benefits greatly outweigh the downfalls.

If you want to get your hands on one of these beautiful cases, feel free to visit Shinnorie's site here and pick one up for USD$60 (including shipping worldwide), or alternatively you can keep your eyes on Neowin through the month of April for the chance to win one.