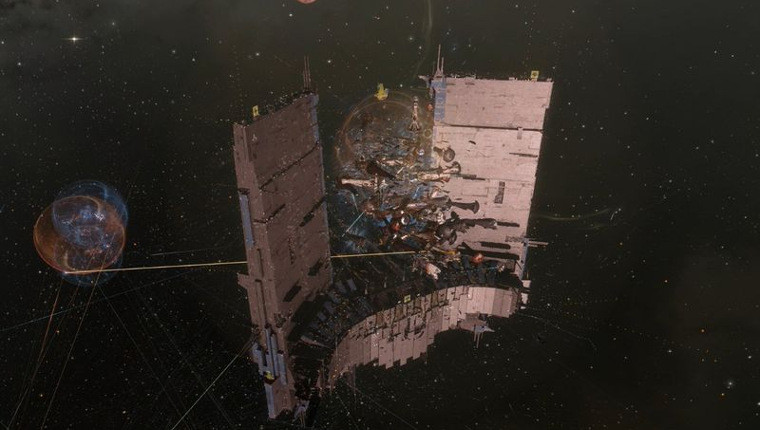 Eve Online; the space-based, persistent world, massively multiplayer online role-playing game, has just had its largest battle to date. However, the space battle seemed too much for the real world systems managing the game to handle. Thousands of players have complained about the game not operating as it should have at crucial points in the battle and ultimately deciding the outcome.

Players in Eve Online have access to thousands of star systems on one server where they can mine for resources, raid other ships, trade, manufacture, and a whole bunch of other activities. Players actually spend so much time in the game that this battle's estimated cost was $10,000 in real world terms because of ships being lost that had hundreds of accumulated game hours embodied in them.

Although that's far short of what was expected, as this fight had been dubbed by some as the "million dollar battle". Unfortunately though, one of the sides in the battle didn't commit some of its more expensive ships. So in terms of cost, it didn't come close to the $330,000 that the last major battle tallied up a few years ago.

The game is 15 years old but has received updates over the years. Players have also formed factions with hundreds of members that command massive fleets. The recent battle, over what is known as a Keepstar citadel (that giant gray space station which dwarfs everything else), was a territorial clash that involved some of the game's biggest factions; the Imperium and the Pandemic Horde. The Imperium fleet had hinged their attack strategy on sending in wave after wave of drone fighter-bombers to periodically defeat the Keepstar through attrition.

In order to process the sheer amount of players, commands, and activity that happens in an online battle with thousands of players and craft; the game has its own supercomputer but also uses what's called Time Dilation. Basically, it slows down time in the game so that things should still happen as players want them to but also at a pace that the infrastructure behind the game can handle.

Nonetheless, players involved in the battle, as well as many spectators, are saying that the system started to react sub-optimally. According to the leader of the Imperium, unpredictable server lag was a major problem, but other issues - like pilots not being able to log in and the sequencing of requests essentially collapsing - all played a role in making the battle into a bit of a shambles. In the end, the attackers' plan didn't go as they had wanted. The game only saw them send in one wave of drone fighter-bombers to the Keepstar over a three-hour period, and not the waves they had planned. On a positive note, the leader of the rival Pandemic Horde agreed that these issues had affected his faction as well and that at the end of the day the company behind Eve Online, CCP, needs to do more to keep its loyal and dedicated players happy.

The direct battle over the Keepstar at sector 9-4 involved more than 6,000 pilots, while another 6,000 fought in a proxy battle nearby, with 10,000 people tuning in to watch the event on Twitch. Just for perspective, there were more people piloting ships in the main Keepstar battle in the game than there were piloting planes for the RAF during the Battle of Britain in the Second World War.

CCP is an Icelandic gaming company that recently announced it would be abandoning any future VR projects, the company is looking into the issues that were experienced to see what can be done in the future. From the large reported collective experience, by thousands of gamers and spectators, it seems the demands of the world's biggest video game battle is presently over the edge of what can be offered by its makers.