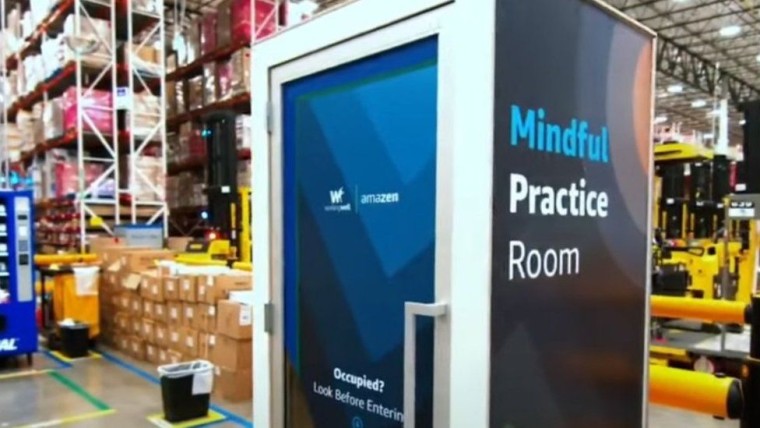 After receiving some bad press about workers' conditions at Amazon, the world's largest online retailer has since introduced several new major improvements to ensure their staff is taken care of, which is vital if they are to grow at the rate they want.

Their latest new solution to this is simply called "AmaZen", and are booths where workers can wind down if they are feeling stressed. Inside these booths, workers can then watch "short videos featuring easy-to-follow well-being activities, including guided meditations, positive affirmations, calming scenes with sounds." Some people took offense to this and started likening the booths to 'despair closets' and even comparing them to the suicide booths from the TV show "Futurama":

i feel like livable wages & working conditions are better than a mobile Despair Closet https://t.co/k4stnC0Ws0

For example, it was reported earlier this year about Amazon workers peeing in bottles for fear of being seen as wasting time, which lead some to suggest that Amazon should install porta-potties instead of Zen booths:

the AmaZen “ZenBooth” is here! a Porta Potty would be more useful to its intensely exploited and surveilled workers but I appreciate Amazon’s commitment to the bit https://t.co/U0GLysPqkP

The introductory video that Amazon released on Twitter has since been deleted, but seeing as the Internet never forgets, it has already been uploaded to YouTube for posterity.

However, one shouldn't quickly dismiss what might be one of many new initiatives from Amazon in the pipeline, but it's safe to say that considering the backlash in social media, AmaZen booths won't be the solution their workers have waited for.

And seeing as Amazon will have a new CEO called Andy Jassy by July 5, we can always hope that he brings with him a new take and ideas on the matter.

Source: BBC and The Guardian