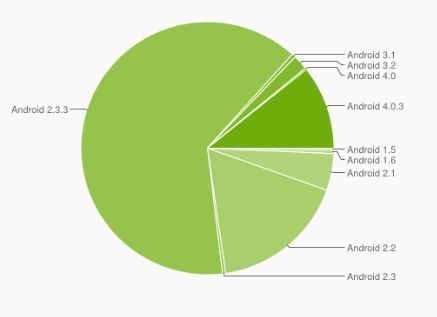 In June, according to information on Google's Android Developers page, Android 4.0 was installed in just 7.1 percent of all Android devices that have the Google Play download store installed. In the latest update on Android installs, it appears that Android 4.0 installations saw a respectable increase in just one month.

The new update on the Android Developers page shows that the 4.0 version (also known as Ice Cream Sandwich) is now installed on 10.9 percent of all Android devices. While that's still a small fraction of all the Android products out there, it does show that 4.0 is finally gaining some traction nearly nine months after it was launched with the Galaxy Nexus.

Earlier in June, Google announced that Android 4.1 (Jelly Bean) would be included in the new Nexus 7 tablet and that it would be made available as an over-the-air update for Motorola's Xoom tablet and the Samsung Galaxy Nexus and Nexus S smartphones later this month.