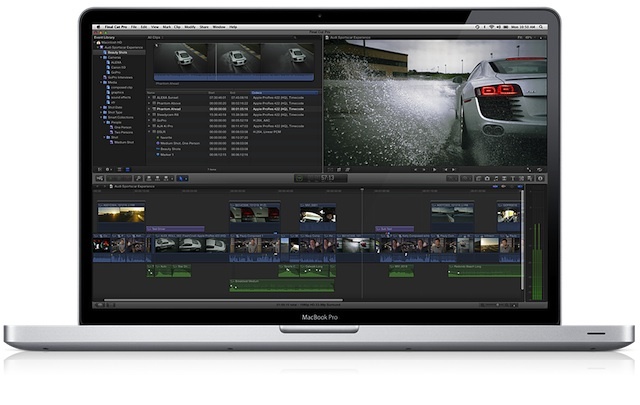 Final Cut Pro X, the much-anticipated overhaul of Apple's professional video editing package, made its debut on the App Store earlier today. Companions Motion 5 and Compressor 4 were also released, retailing for $50 each.

Apple highlighted three key features as the driving force behind FCPX. A redesigned editing interface includes new tools such as a magnetic timeline and clip connections, avoiding the usual annoyances of video syncing and filling in gaps. The media itself has also been made simpler to access with a new keyword and metadata searching system. Finally, the new Cocoa underpinnings have allowed for 64-bit support as well as a more responsive interface. Snow Leopard-specific technologies such as Grand Central Dispatch have been put to use for a more efficient use of system resources. Apple requires an OpenCL-capable graphics card or an Intel HD Graphics 3000 or later, any of which must have 256MB of VRAM.

Motion 5 also features a new interface. Joining the new interface is a new template system as well as "rigs". Rigs allow users to make adjustments to large groups of objects in a small amount of time. Compressor 4 has also been improved to match its bigger Final Cut Pro brother. More specifically, a new distributed encoding system promises to make encodes go faster by sharing the workload around other machines.

Final Cut Pro X is $300 and available from the Mac App Store.