It's OK though, the site was hacked "in the name of research". 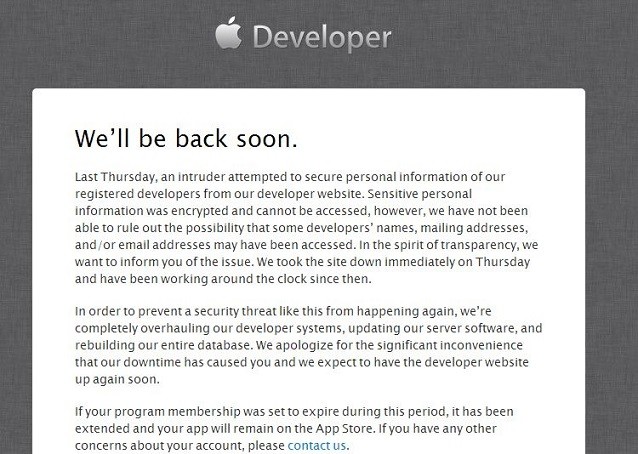 As reported yesterday, Apple’s developers website went down on Thursday of last week and after a few days the company finally admitted on Tuesday there was a breach in their security. As of writing the developers area of the site is still down for maintenance.

Now, ibrahim BALİÇ, a security researcher based in London has stepped forward and claimed responsibility for the breach, saying it was done "in the name of research" and not with any malicious intent.

This is definitely not an hack attack I have reported all the bugs https://t.co/TVhHM3p73c @Nirgoldshlager @TechCrunch @ForbesTech @mashable

BALİÇ later posted another tweet adding ""I am not a hacker, I do security research."

The tweets certainly grabbed Apple's attention, because they have now contacted him about the vulnerabilities he found. "We're completely overhauling our developer systems, updating our server software, and rebuilding our entire database," Apple said in an email. "We apologize for the significant inconvenience that our downtime has caused you and we expect to have the developer website up again soon."

This does raise the question about the ethics of such "research" practices. If you broke into a bank or business to expose the weakness of their security, it would almost certainly be considered a criminal offence and the authorities would be involved.

However, one has to ask if companies are still taking security too lightly, only acting upon such vulnerabilities when the breach has already taken place, or if the "researchers" could do better assisting companies rather than intentionally disrupting services.

Update: The Developer Center is for the most part still down, you can track the status of the site here.