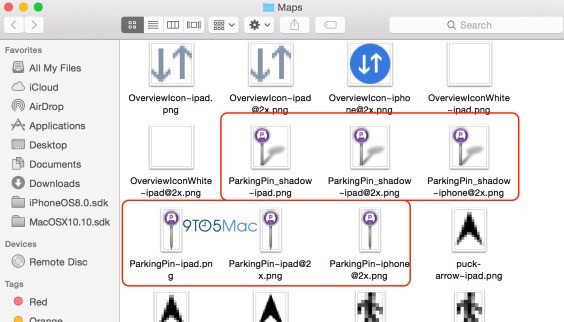 Have you ever parked your car, gone shopping, only to come out and have no idea where your vehicle is located? It’s happened to all of us at some point and it looks like Apple wants to help with this frustration, hinted at by assets found inside iOS 8.

Apple’s beta of iOS 8 contains six images that can be used to locate a parked car but we don’t know when, or even if, this feature will show up in iOS 8 after it launches later this year. It's possible it could show up with iOS 8.1, or be pushed back to an update even further down the line.

This feature is one of many that are likely hiding in the code of iOS 8 and we have already seen that multi-tasking support is present for iPads but the code is clearly not finalized.

These hidden features will most likely make their way into a stable build of iOS but Apple has a tendency to push out features slowly and will not typically release a feature until it has been perfected. Of course, this is not always true as the disastrous launch of Apple Maps demonstrated.

It’s not quite clear how the feature will work; for example, if your phone will know you are parking or if you will have to manually assign the parking location. If the device was somehow capable of storing your parking spot automatically, without needing you to prompt it to do so, this would significantly add to the usefulness of the feature.