Ubisoft's Assassins's Creed franchise is finally set to receive a new entry with Assassin's Creed Origins, following a two-year break. It seems that the French game developer has a few other plans for the popular game series as well, as the company is planning to create an animated series set in the Assassin's Creed universe.

The news arrived via a Facebook post by Adi Shankar, producer of the upcoming animated Netflix series, Castlevania. Shankar had been contracted by Ubisoft to create "an anime series" based on the popular action game franchise. Not many details about the series were revealed, with Shankar only saying that the new series' story will be an original one. 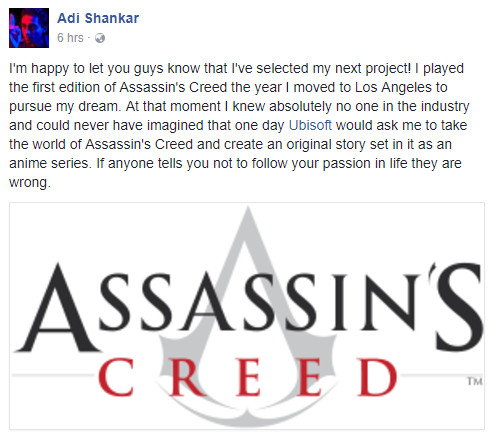 Shankar has been involved with movies such as the Judge Dredd remake 'Dredd' in 2012, Machine Gun Preacher, and The Grey. His latest project, Castlevania is set to air on Netflix on July 7, a series based on the 1989 Castlevania III: Dracula's Curse game by Konami.

It was revealed earlier in March that an Assassin's Creed TV series is in development, but it's unclear if that was, in fact, the same project as Shankar's. There is also a possibility of the animated series being a Netflix exclusive production.

All in all, this will hopefully be a better adaptation of the game series than the live-action Assassin's Creed movie, which garnered a poor critical reception.