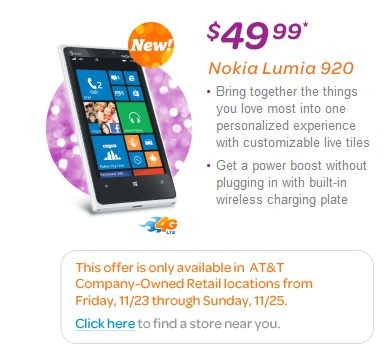 AT&T just launched the Nokia Lumia 920 a few days ago, but the wireless carrier is already planning to offer the Windows Phone 8 device with a big price cut as part of its Black Friday 2012 sales event.

The AT&T website has posted word that from Friday to Sunday, the Lumia 920 will be on sale for just $49.99, compared to its normal price of $99.99. The price comes with a free wireless charging plate. This Black Friday deal does have a caveat: it is only for those smartphones that are sold at AT&T's company-owned retail stores. In other words, this won't be available online or at other retail locations.

So what about all those people who became early adopters and bought the Lumia 920 ahead of this week's Black Friday sale? WPCentral.com reports that those customers who call AT&T or speak to a company rep in a store will be able to get a $50 credit on their AT&T account.

Keep in mind that there will be a limited supply of Lumia 920 devices at AT&T stores, and even if they do have some in stock, they may not have the case color that you have your eye on.