In May, the BBC introduced a major update to its iPlayer app for Windows Phone, giving it a new look, improved performance and, for the first time, support for live television, finally allowing British viewers to watch the Corporation’s portfolio of UK TV channels on the move. However, it wasn’t all good news, as support for radio content was removed from the app completely.

The BBC did offer some hope though, promising that it was working on an app to bring its radio services back to Microsoft’s mobile OS, and that app has now arrived. Almost two years after the launch of BBC iPlayer Radio for the iPhone, the app is now available on the Windows Phone Store. 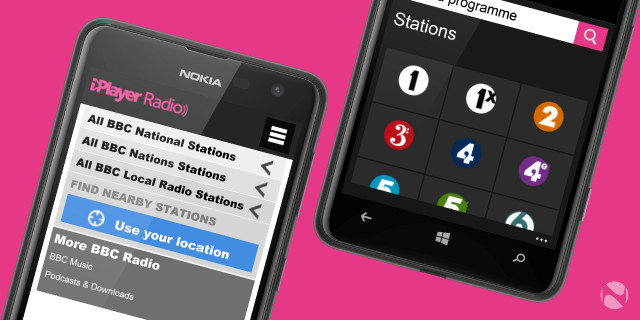 The app allows users to listen live to the BBC’s UK radio stations, along with the World Service, as well as offering catch-up support for some programming that has already been broadcast. The user interface is similar to that of the main iPlayer app, with some thought given to helping listeners to discover new content.

Unfortunately, like that app, iPlayer Radio is basically just a web wrapper, rather than offering a full native app experience. It also lacks some of the features available on other platforms, as the BBC itself acknowledges.

Daniel Bean, senior product manager for BBC iPlayer Radio, said that the Beeb was keen to deliver a working app as quickly as possible to satisfy demand from users who were left wanting after radio support was removed in May. He said: “This means that some features which are more challenging to build aren’t currently available, such as signing in to your BBC account or listening to catch up programmes for national and local stations.”

The BBC says it will deliver these features at some point in the future, but details have not been shared on when exactly that might happen.

BBC iPlayer Radio is now available to download via the Windows Phone Store, and is exclusively available in the United Kingdom.