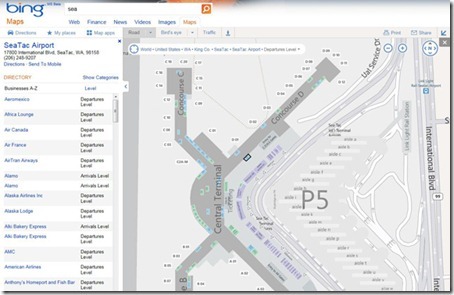 Microsoft's Bing Map service may not be as popular as Google Maps but the company has been trying to add new features to the services to make it stand out from the crowd. This week Microsoft announced on its Bing blog that it has added support for 42 airport terminals in the United States. They include such busy airports as Atlanta's Hartsfield Jackson International Airport, all three major New York City airports (Newark, John F. Kennedy and LaGuardia) and Los Angeles International Airport. Oddly none of Chicago's airports, which are some of the busiest in the US, are included in the Bing Map service. Microsoft does say it will add more airport terminals in the Bing Maps services in the coming months.

The airport terminal maps allow users to check out a number of the services and locations in detail in the terminal buildings. That includes things like parking garages, ticket counter locations, airline gates, baggage claims, currency exchange, shops, restaurants and more. In addition the Bing Map feature allows users to check their flight status while they are traveling.

The airport terminal maps in Bing Maps are much more detailed than the ones found on Google Maps which only show the basic layout of the terminal building with little info and no detailed  maps of what services are inside. Google launched its own airline flight service, Google Travel, earlier this month. It's possible that Google Travel would expand in the future to include more detailed airport terminal information.