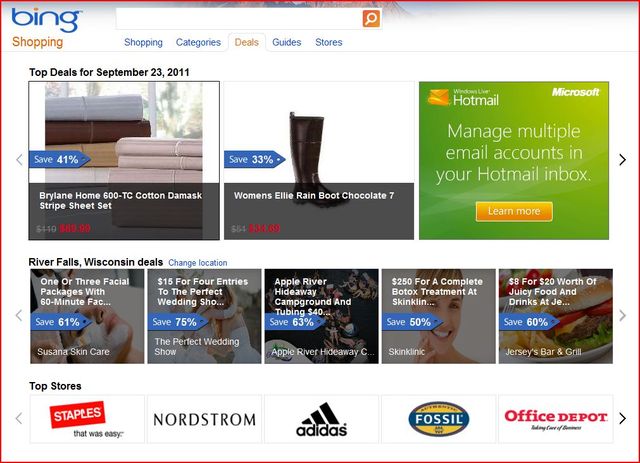 Online shopping is big business and everyone wants a piece of the proverbial pie. Daily deal sites like Groupon and LivingSocial may be losing some of their popularity, but everyone still wants to be able to find a deal when shopping. To that end, Bing has announced a new site, called Bing Deals, to help users find great prices on the products they want to buy. The new site searches the Internet and builds a database of products and their respective prices. This data is then accessible via the Bing search engine, displaying the best prices and what stores they are available at.

The big selling point for Bing Deals is the aggregation of daily deals that are presented based on the area where you live. Keeping track of the special deals in your area can be a time consuming process, so Microsoft gathers them for you and displays them in the middle of the screen. The site may want to update the labeling because there is no indication that those are daily deals and the company providing the deal is also absent from the display.

In addition to shopping, users can select from a large list of stores and are presented with deals that are available. For example, clicking on the prominently displayed “Office Depot” logo brings up several coupons including $30 off a $150 purchase and free shipping on all ink and toner.

There have been deal aggregation sites for years, with sites like Slickdeals.net and Techbargains.com helping shoppers save money with handpicked deals. While Bing Deals will not replace those sites, it looks like it has the potential to be a nice one-stop shopping spot for people who just want to browse.