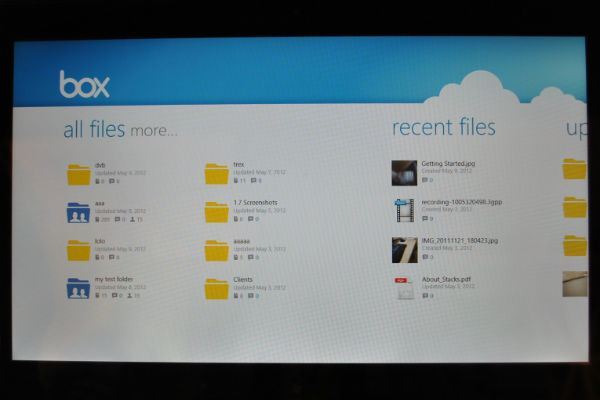 Microsoft may have announced plans to offer support for SkyDrive for Windows 8 but it is not the only company that will offer a Windows 8 client for cloud file storage. Time.com reports that Box has revealed plans for its own Metro-based Windows 8 app. The app was also demoed briefly, and in a beta state, at this week's CTIA Wireless trade show.

The app should be available when the final version of Windows 8 is launched later this year and Box might even release an early version of the app for the Windows 8 Release Preview version when it comes out the first week of June. Simon Tan, Box’s mobile product manager, states, "We kind of think that Windows 8 is going to be big. So we’re placing a bet.”

The Box app for Windows 8 won't just be for file storage; it will also be a place where users can share and collaborate on documents. The app can share file links from email or various social networks and will use Windows 8's universal search to file files in a user's Box account from any other Windows 8 app.

Box's file storage service is geared mainly for businesses. Indeed, the company's current PC desktop app is just for paid enterprise users, although anyone can download and use the Box app for iOS and Android.