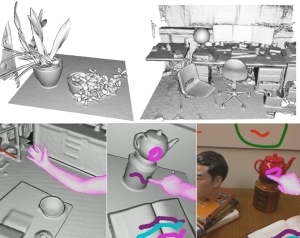 Microsoft has offered a way for PC developers to create applications that use the Kinect gesture capture device since early 2012. Recently, the team released a new version of the Kinect for Windows SDK which added, among other things, official support for Windows 8.

During a session today at Microsoft's BUILD 2012 conference in Redmond, Washington, the company talked about programming for Kinect on the Windows platform. At the end of the panel. the company reps showed off one of the future features it will added to Kinect for Windows, which it calls Kinect Fusion.

In basic terms, Kinect Fusion will allow the Kinect device to take a picture of objects, or even entire rooms, and then reconstruct them as 3D virtual models. The panel included a live demo where the Kinect device scanned a table, and even a person, and then showed those objects in full 3D models.

The panel also included a video which showed Kinect Fusion at work scanning a room. The software allows for virtual objects to appear in the digitized room. As an example, the room that was scanned was then hit with a virtual blob of paint, which reacted realistically with the room's objects.

There's no word on when Kinect Fusion will be added to the Kinect for Windows SDK, although we would think it's not too far off. We did ask in the Q&A session if Microsoft was planning any hardware changes or improvements to Kinect but, as expected, the Microsoft rep would not comment on any future Kinect hardware plans.