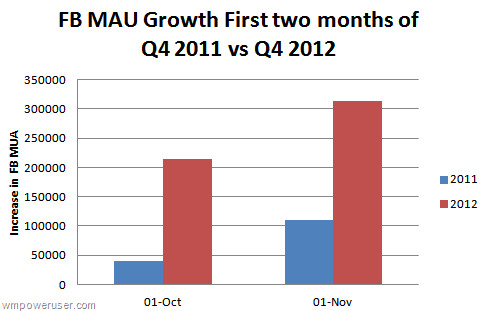 A few weeks ago, Microsoft CEO Steve Ballmer claimed that sales of Windows Phone devices had gone up by four times the amount sold in 2011 following the launch in November of Windows Phone 8. However, he declined to give any specific sales numbers. Now, there are indications that Ballmer may actually know what he was talking about.

What does this mean? While the number of Windows Phone users that use Facebook is certainly tiny compared to other platforms like the PC, iOS and Android, these numbers do seem to suggest that Windows Phone ownership has grown by the amount that Ballmer said in late November.