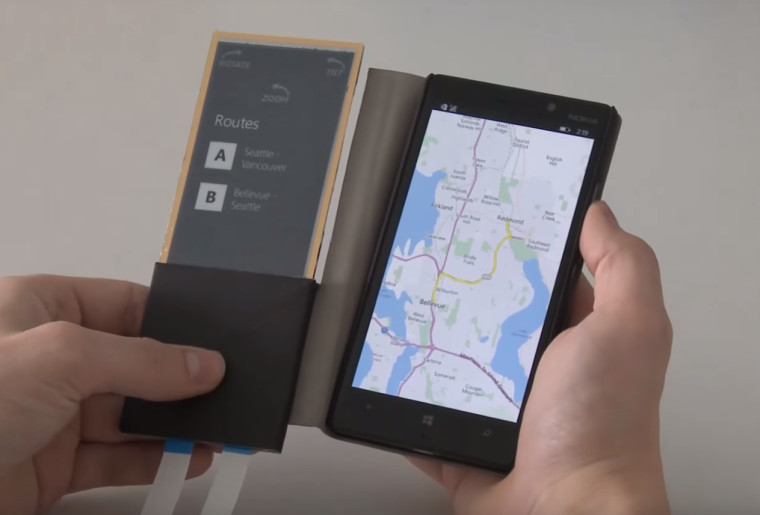 Smartphone cases are usually nothing to write home about. However, that has been slowly changing and a good example would be HTC’s latest Ice View case, that offers a sort of secondary screen and a new input model. Of course, Microsoft doesn’t want to be left out in the cold when it comes to the cutting edge world of device covers, so Microsoft Research has created the FlexCase.

The FlexCase is not a real product destined for the market. Instead it’s a proof of concept and an exploration of possibilities, developed in partnership with the Media Interaction Lab at the University of Applied Sciences Upper Austria and the Institute of Surface Technologies and Photonics at Joanneum Research.

On top of possibly saving your phone from scratches or dirt, the FlexCase lets you interact with your device, a Windows Phone in this demo, in new ways. The FlexCase can be used as a secondary display as it features an E-Ink screen. It can also be used as a secondary and even tertiary input surface, having multitouch capabilities on both sides. Finally, and perhaps this is the most interesting bit, the case can recognize when and how it’s being flexed to send different commands to the device.

The researchers envision three modes of usage for the FlexCase, in what they’re calling “book mode”, with it just being a secondary navigation screen, “laptop mode” with the cover offering a touchpad-like experience, and “backside mode” where the cover can be used to control the device without obscuring the screen.

As mentioned above this is clearly not a product made to be released, but all the concepts shown here are pretty interesting and could allow for lots of new use cases, especially if Microsoft opened up the platform to third parties.

To that end we’d love to see a finished version of the FlexCase being launched alongside the rumored Surface Phone, or even with the next Surface Pro tablets, though that’s quite unlikely to happen.

Source: Media Interaction Lab | Thanks to Walking Cat for the tip!