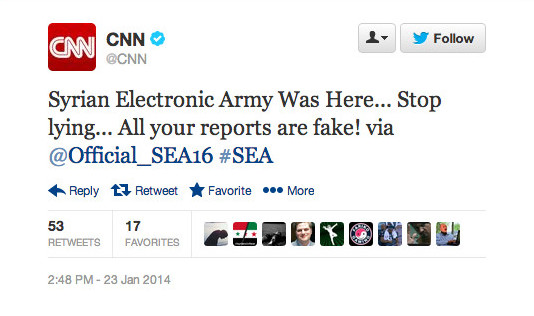 The SEA is still going strong and Twitter accounts are still being compromised in droves, as today marks the fourth attack this month against popular Twitter accounts by the Syrian Electronic Army. As of around 6:00 PM eastern time today, CNN's blog was unauthorizedly accessed by the group of 'hacktivists', who are aligned with Syria's Assad regime. The tweets were quickly deleted, but not before they could be seen and screen shots taken.

The hackers left a series of semi-cryptic messages on CNN's account, noting their displeasure with the news agency's reporting and the American government's reaction towards the conflict. Thus far they have not released any statement on their Twitter account, but it was noted by Matthew Keys, former social media editor for Reuters, that they apparently gained access via a phishing attack on a Hootsuite account connected to the organization. Though this is unconfirmed by any official source, it provides some insight into the details of how the SEA managed to gain access during their various attacks.

This unauthorized entry marks the fourth attack this month on social media sites associated with popular companies. On January 1st, the SEA defaced the Twitter, blog and Facebook of popular internet calling service Skype, telling them to "stop spying on people". Slightly over a week later, they hacked the Xbox Support and MSFTNews Twitter accounts belonging to Microsoft - and a week after that, they compromised the official Microsoft Office blog. Whatever their motivations, today's attack on the CNN account speaks to questionable security on the part of both Twitter and Twitter users, something that should be considered going forward as the hacktivist group doesn't seem to show any sign of slowing down.

Update: The original title made mention that CNN's Twitter account has been hacked - in a story published on their main site, the news agency has confirmed that multiple social media pages were taken down by the SEA, including their Facebook and blog pages belonging to CNN's 'The Lead', 'Political Ticker', and 'Situation Room'.