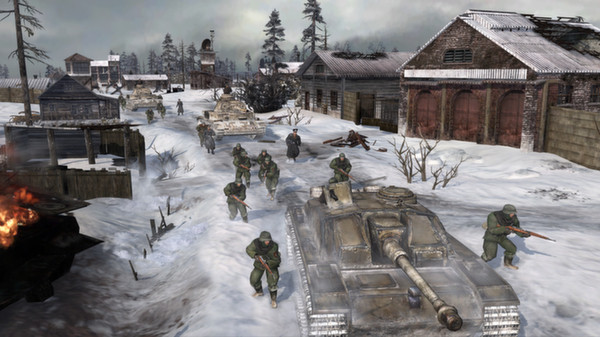 THQ is trying to get enough people to pre-order the upcoming WWII RTS game sequel Company of Heroes 2 before the Relic-developed game is released in early 2013. To that end, the publisher has set up some unlockable rewards that will be made available for pre-orders.

The Steam page for Company of Heroes 2 reveals that the first tier of pre-order rewards has already been unlocked. That will give those owners who also play Valve's multiplayer shooter Team Fortress 2 some new in-game items inspired by Company of Heroes 2.

The second tier of special unlocks will give pre-orders a Steam game code for a free digital download of Relic's Warhammer 40,000: Dawn of War II: Retribution. Finally, the third unlock will add more in-game content to Company of Heroes 2, including an XP and unit boos, a commander archtype and some extra in-game currency that can be used to purchase more content down the road.

Everyone who pre-orders Company of Heroes 2 will also gain access to the upcoming beta test of the RTS game along with the German Rotbraun and Russian Leningrad Pattern Bundle, which will add two exclusive medium weight vehicle patters to the game.