The latest ComScore results released today suggest market share for Google's mobile operating system, Android, grew strongly during the last quarter between March and May rising 4% since February at the expense of other mobile platforms including Microsoft's Windows Mobile and Apple's iOS devices.

ComScore says there's now more than 49.1 million smart phone subscribers in the US alone, an 8.1% increase on February results, which on a whole has seen numbers grow for all smartphone manufacturers.

But the quarterly results suggest Android was the most popular operating system in comparison to competitors in the past quarter, now enjoying a 13% market share in the United States, up from 9% in the previous quarter. While Android still maintains fourth spot, third-placed Windows Mobile is losing ground rapidly -- falling 1.9% since February and leaving it with a share of just 13.2%, only .2% ahead of Android.

Apple's iOS devices including the iPhone 3GS and 3G have maintained second position with 24.4%, although their combined market share fell 1% from the previous quarter ahead of the iPhone 4 launch in June. Growth is expected to occur here again next quarter which will include the debut of the iPhone 4.

And according to ComScore, Research in Motion still dominates the market share in the US, with a 41.7% cut, although this is down by .4% on the February results. Meanwhile, Palm's webOS devices bring up the rear, with a meager 4.8%, down from 5.4%.

Those with a mobile device interacted with it more than ever says ComScore, with interactions such as sending a text message (65.2%), using a mobile phone web browser (31.9%), using downloaded apps (30%) and listening to music (14.3%) all increasing. 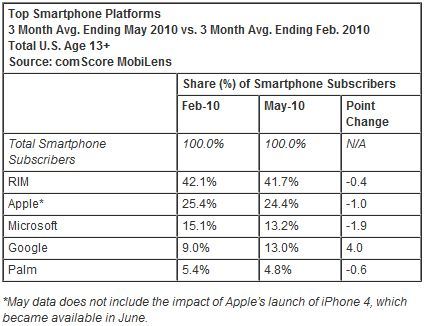