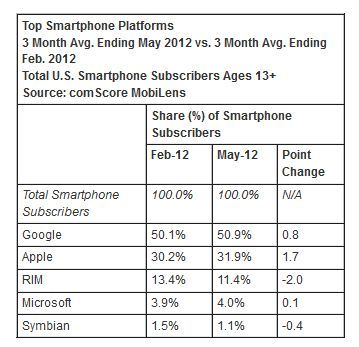 The share of the US smartphone operating system market by Microsoft rose slightly between February and May 2012, according to new data from ComScore. Their figures show that Microsoft went up from 3.9 percent in February to 4.0 percent in May.

Samsung was the biggest mobile phone maker in the US with 25.7 percent of the market in May. LG was second with 19.1 percent, followed by Apple with 15 percent in third place. Motorola was fourth with 12 percent and HTC was fifth with 6.1 percent.